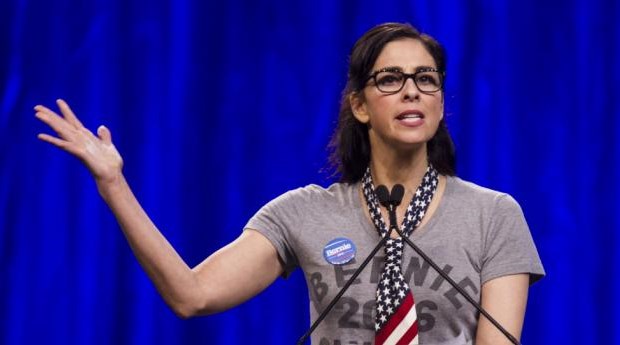 Sarah Silverman has a funny way of sharing her love for the United States.

Sure, the shock comedienne loves her country. She just doesn’t see it as better than other nations. Nor is she comfortable with public displays of patriotism.

Even the sight of a boyfriend raising an American flag gave her the creeps.

Silverman recalled her fear of patriotism earlier this month during a politically-charged chat with New Yorker magazine. Silverman shared how she once recoiled as a beau installed an American flag outside of his property.

“I love America, but not like above all other nations,” Silverman said during the Q&A. Which is why she felt so conflicted by her boyfriend’s actions. So she called up her sister for some advice.

“Why do I feel so uncomfortable?” she asked her sibling.

“Because Jews have an innate fear of nationalism.' I said, ‘oh that makes a lot of sense,'” she said.

“That ‘USA is number one,’ that fervor, it’s so scary. It’s really my favorite combination in comedy – arrogance and ignorance. It’s this closed, xenophobic… like, ‘we’re number one,' and needing for us to be number one. Number one in what? Juvenile diabetes?”

She then brought up Bernie Sanders, the avowed socialist who gave Hillary Clinton a big scare before fading in the primaries.

“That’s what I loved about Bernie … people go, ‘he’s a socialist ‘ Well, I don’t know, do you like fire fighters? Do you like schools? These are socialist programs,” she said.

And she thinks Donald Trump’s rise is a reflection of that “We’re Number One” mentality.

“The people that love going, “USA, USA,” she said. “There’s something really scary about that.”

Don’t be fooled, though, Silverman says.

“He comes off great, but he’s a monster,” she said of Pence.