On January 5, after American drones took out Iranian terrorist mastermind Qasem Soleimani, CNN’s Brian Stelter launched into one of his Sunday morning sermons, insisting that patriotism flows like a river in America’s newsrooms. His definition might very from yours, however.

There’s nothing wrong with skeptical questions of our government. But why is it impossible to celebrate blowing up the man responsible for the deaths of untold thousands, including over 600 Americans? And why do they so often fail to muster that same sort of skeptical questioning for the tyrants and thugs opposing American interests? Theirs is a long, sordid history of offering unchallenged platforms and even buttery sympathy to our enemies. 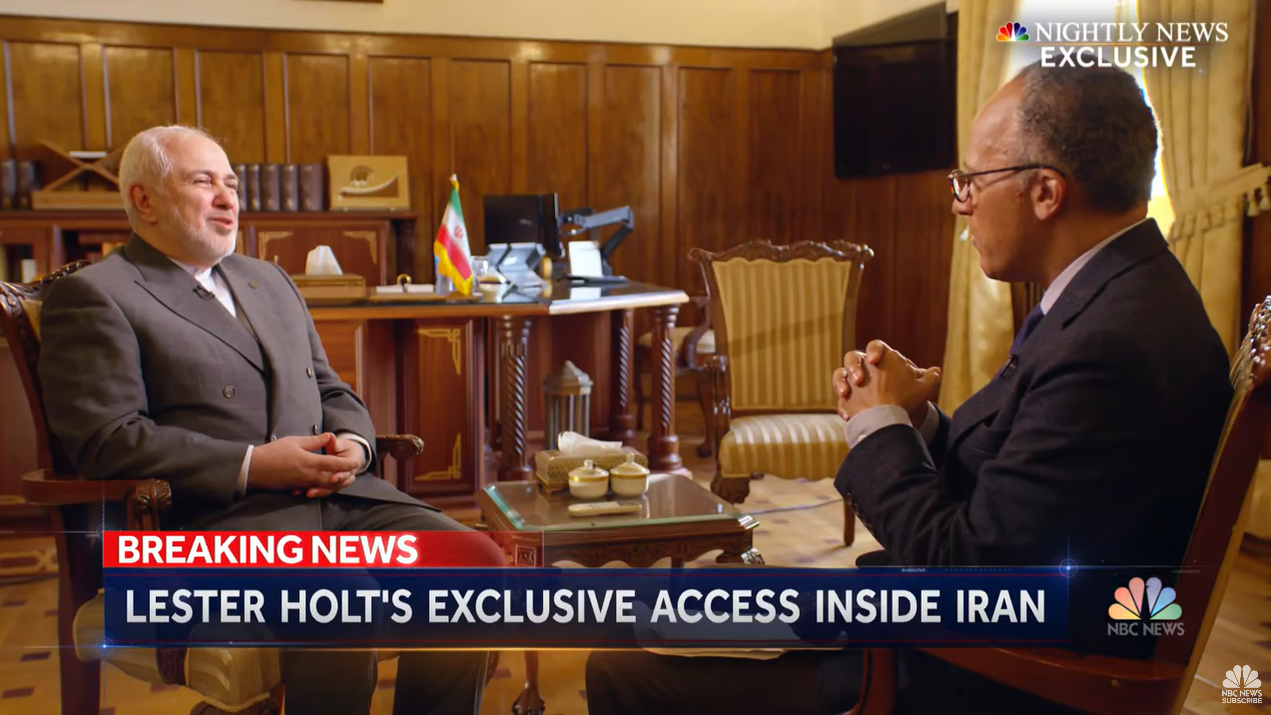 Just five months ago, NBC Nightly News touted on screen “Lester Holt’s exclusive access inside Iran,” but his questions were exceedingly polite and bland. He read to foreign minister Mohammad Zarif the U.S. administration calling Iran a state sponsor of terror, and then just said “To that, you say what?”

In another interview, as the leader of Iran’s parliament explicitly insisted Iran would crush America in a war, but Holt could only ask “How far is Iran willing to go to defend its interests?”

In the same news cycle, CBS correspondent Imtyaz Tiab lined up a member of Iran’s vicious Revolutionary Guard to denounce President Trump. “Hossein Dehghan says the U.S. is behaving like pirates and called President Trump a gangster.” No dissenting voices.

Worse yet, Tiab then went to a hospital to underline enemy propaganda that U.S. sanctions were causing children to die of cancer in Iran. No skepticism was demonstrated.

But it can be even worse. Take Stelter’s CNN. In 2012, then-primetime host Piers Morgan asked Iranian president Mahmoud Ahmedinejad: “How many times in your life, Mr. President, have you been properly in love?” Through a translator, the Iranian leader responded  “I’m in love with all of humanity. I love all human beings.” Morgan gushed: “That might be the best answer I’ve ever heard to that question.”

In February of 2007, ABC anchor Diane Sawyer also paid homage to Ahmadinejad’s feelings. “Is there anything surprising, personal about President Ahmadinejad that we didn’t know?’ Well, it turns out, someone told me he cries a lot. That he is dramatically sentimental and sympathetic if someone comes up and expresses a personal plight. So I just asked him. ‘Are you often in tears?’” Ahmadinejad replied “Yes, that’s true.”

It’s also hard to forget Sawyer getting access to murderous Syrian dictator Bashir Assad on the same treacle tour. “You like video games?...Do you have an iPod?....And you're a country music fan. Faith Hill? Shania Twain?” She touted Assad’s “elegant, athletic” wife and added they “famously live in a modest home.”

This has been going on for decades. In 2003, Dan Rather was thrilled to get a sit-down interview with Saddam Hussein. He respectfully addressed him as “Mr. President,” and sat cooperatively as that thug declared he had won 100 percent of the last election. “100 percent,” Rather repeated, with a tone that sounded like “you don’t say?” He begged Saddam to say some words in English and asked him if this might be the last time they would meet.

If our press were truly patriotic, they would question our tyrannical enemies at least as skeptically as they question our own elected leaders. Instead, they’re so hungry for access, for a big “get,” that they sound like butlers and maids to the world’s worst thugs.

Oh, and they hate Trump.