When the Washington Post infamously posted the motto “Democracy Dies in Darkness” on its masthead after Donald Trump was elected, it was implicit -- oh, sure, they'll deny it -- that Trump was the enemy of democracy, and of “light,” or transparency. So it was sadly poetic that after the House Democrats rammed through such an incredibly partisan impeachment vote – without a single Republican voting Aye – Washington Post reporters posted a photograph on Twitter celebrating with beers. 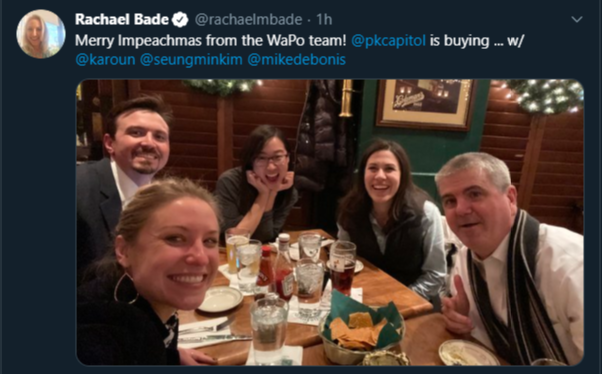 With all their tweets and all their angry opinionated segments on CNN and MSNBC, these journalists cannot be misunderstood. This was a “Mission Accomplished” message. The Post and all their brethren in the Trump-hating media have been seeking this vote since before Trump was even inaugurated. It’s hard to tell whether the Democrats or the media have been more ardent in seeking Trump’s removal from office. It’s difficult to discern the slightest difference in partisan aggression between the Democrats and the press.

Our only question is: Who are the leaders, and who are the followers? Are the ideologues in the media forcing their will on the Democrats, or the other way around?

After Speaker Pelosi’s crackpot impeachment came her declaration that she would withhold the articles of impeachment from the Senate. "So far, we haven't seen anything that looks fair to us, so hopefully it will be fairer, and when we see what that is, we'll send our managers," she shamelessly proclaimed. As if the Democrats and their media allies have been fair to Team Trump all along. She called Senate Majority Leader Mitch McConnell a “rogue leader” for failing to bend to her will.

NBC located “a source familiar with the administration's reaction” who asked: "How can these people be taken seriously?"

Mark Levin took it very seriously. “She’s unilaterally sitting on the impeachment. This is another brazen unconstitutional act.” He argued the impeachment should be declared “null and void” by the Senate. “Her effort to cripple the presidency and blackmail the Senate must be defeated.” The Founders didn’t set up this system so the House Speaker can make demands of the Senate until they cry “Uncle.”

This is where the media’s bowing and scraping to Democrats and their strategists warps our system. They’re not part of the checks and balances. They have no balance, and they never check the Democrats. The media paint everything Team Chuck & Nancy do as “historic” and “solemn,” and the Republican reaction as “diatribes” and “onslaughts.”

During the Clinton impeachment in 1998, TV reporters also sounded hopelessly devoted to the Democrat party line. They emotionally announced the Starr Report was a truck bomb, and compared the entire process to a puritan Big Brother obsessing over Clinton’s sex life as we all lived in George Orwell’s 1984.

Perjury? Who cares about perjury?

The morning after the Trump impeachment vote, ABC “news” man George Stephanopoulos grimly implied Trump will have an “indelible mark on his record.” Indelible? This, from the “journalists” who blatantly campaigned in 2016 to put Bill Clinton back in the White House as First Gentleman.

The media cannot credibly lecture anyone on the erosion of “democratic norms” under this president. They have eroded every journalistic norm in their crusade to remove Trump, and are now stenographers to undoing constitutional norms. They are the ones casting a dark shadow over our democracy. And no one gets to remove these unelected, permanent politicians them from their offices.