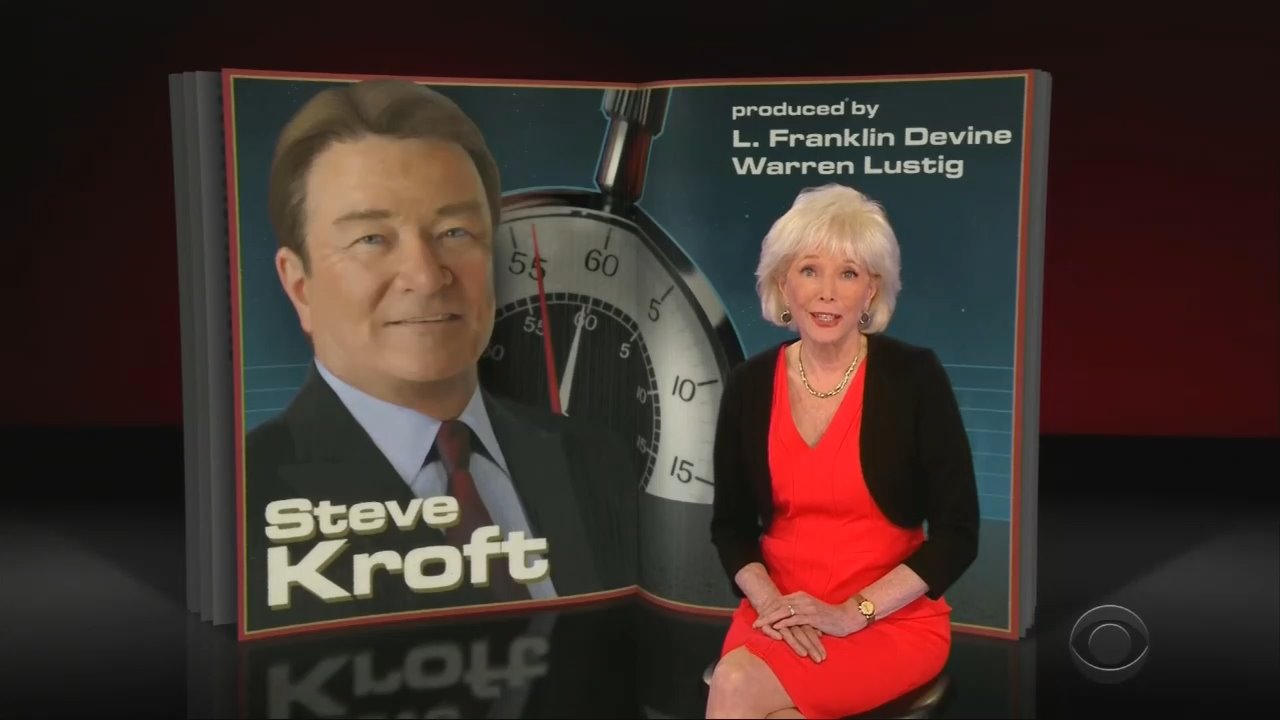 Think of the media’s daily disgust with President Trump patting himself on the back. Then watch something like 60 Minutes aerobically praising their own genius in an hour-long episode on September 8, celebrating the career of its retiring correspondent Steve Kroft. Not only did Lesley Stahl toast Kroft for an hour for his allegedly fascinating interviews and brilliant writing style, she remembered that when Kroft arrived 30 years ago, “giants roamed the halls.”

CBS. Legends in their own minds.

Nobody spent a second on how this show housed serial sexual harassers like Charlie Rose and executive producer Jeff Fager. Only the legend is allowed.

When you retire from the coal mine or the meat-packing plant, you might get a cake, or a round of beers. At television networks, they air a pile of your video clips for the entire country to watch, and suggest the world would be a dismal place without your amazing talents.

Steve Kroft is best known for his scads of interviews with candidate and then President Barack Obama. Even CBS acknowledged this. But they did not admit that Kroft’s questions were typically soft-foam pillows of words, starting with “Do you think the country’s ready for a black president?” Or “Did you play basketball on Super Tuesday?”

We did the math. Of the 49 Kroft questions in the first four CBS interviews in the 2008 campaign (before the financial crisis hit), 42 were personal or horse-race questions. Only seven focused on issues – five on foreign policy, and two on trade – with no real focus on any domestic issues. Kroft avoided every social issue from abortion to gay rights, every policy concern about taxes and spending, even nothing about nationalizing the health-care system.

Kroft never focused a question on Obama scandals before he was elected, or his record in the Illinois legislature. There was nothing about Chicago scandal figures from Reverend Jeremiah Wright to Tony Rezko to Bill Ayers. Kroft couldn’t even raise the radical Reverend when Obama protested against people hinting he was Muslim by insisting he was "a devout Christian who's been going to the same church for the last 20 years.”

When Obama won – with assistance from CBS – Kroft shifted the ring-kissing to Obama campaign manager David Axelrod. ”You ran an incredibly effective and disciplined campaign, maybe the most effective, I mean, certainly one of the most effective presidential campaigns that's ever been run...How did you manage that? Even the Republicans were in awe.”

On this same "news" program in the fall of 2008, Scott Pelley hammered John McCain for letting Wall Street executives sail away on their yachts after wrecking the economy, and Lesley Stahl recounted to Supreme Court Justice Antonin Scalia that people told her “He’s evil, he’s a Neanderthal, he’s going to drag us back to 1789.”

After Obama' s election, CBS turned its softball interviews into an Obama-promoting DVD titled Obama All Access: Barack Obama’s Road to the White House. Obama backers were told they could watch “the rising political superstar on the campaign trail, the confident candidate poised for victory.”

This pattern of what we called “Syrupy Minutes” continued throughout the Obama presidency. In reviewing his oleaginous oeuvre, Stahl softly asked Kroft "Did you ever feel that you should have pushed harder?" Kroft preposterously claimed “I think that that criticism came from the fact that I didn't get angry with him.”

Kroft repeatedly flattered Obama, and yet Lesley Stahl claimed he had “old-school standards” and just “showed the office respect.” With spin like this, it's self-evident just how foolish they think we are, that we accept all this televised silliness as the facts.