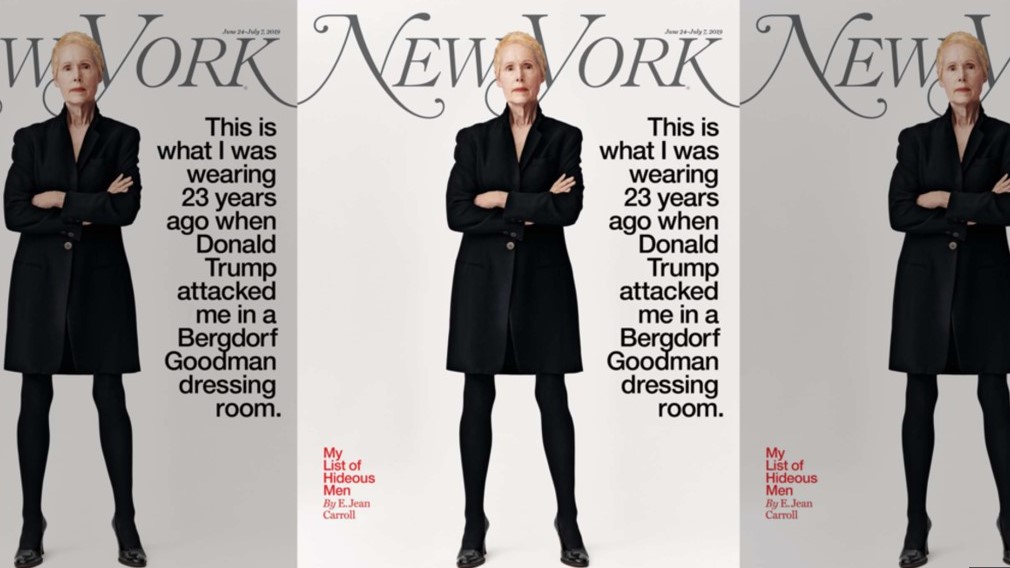 On June 21, New York magazine published a shocking cover story, an excerpt from the new book by author and advice columnist E. Jean Carroll, titled What Do We Need Men For? Carroll described suffering a sexual assault in a Bergdorf Goodman department store dressing room. The alleged assailant is named Donald Trump. When did this occur? She vaguely guesses it “has to be in the fall of 1995 or the spring of 1996” because of what they were wearing.

In her telling, Carroll and Trump playfully talked about lingerie until he talked her into trying something on, and they walked back to a dressing room. Then she claimed he pushed her into a wall, pulled down her tights, unzipped his pants and inserted his penis into her, all while wearing an overcoat. “The whole episode lasts no more than three minutes.” And she dramatically concludes “I have never had sex with anybody ever again.”

That sounds horrible. We should all agree we want to have a president who is not a rapist. The liberals and the Trump haters turned the page back to Clinton accuser Juanita Broaddrick twenty years ago, insisting that conservatives made her a cause celebre.

Yes, that’s true. But there’s at least one important difference: the speed of the journalism.

Carroll’s allegation, made after roughly 24 years of silence, comes with no photos or videotapes. There is no date for the encounter. No one could say if Trump was in New York on whatever day that was. There are two unnamed girlfriends in TV news she says she told about being assaulted at the time. It would be nice if someone among them could find an actual date of this alleged attack. Carroll also alleges she was assaulted by former CBS boss Les Moonves after she interviewed him in 1997. Moonves also denied her allegations.

New York magazine released the story on Friday, June 21, shortly after noon. It was launched on NBC Nightly News...after about six hours. Who needs time for vetting the evidence?

But when NBC News reporter Lisa Myers interviewed Broaddrick back in 1999, NBC sat on the story for more than a month, insisting the story was underbaked, not ready for broadcast. The timing was transparently political. It aired on February 25 on Dateline NBC, thirteen days after the Senate acquitted Clinton in its impeachment trial. Clinton critics had printed up buttons reading “FREE LISA MYERS” in the interim.

Even when it finally aired, Tom Brokaw’s NBC Nightly News remarkably refused to air its own network’s Broaddrick scoop.

Myers thoroughly investigated the allegation, and had placed both Broaddrick and Clinton at the alleged location on that day – April 25, 1978 at the Camelot Hotel. Three female friends all said Broaddrick had told them of this assault, and that she had a black and swollen lip.

Liberals energetically attempted to ignore or knock Broaddrick’s story in 1999, and disparaged her again in 2016 as part of a “Soviet show trial” of Bill and Hillary Clinton when she appeared with Trump before the second presidential debate. Then in 2017, when the Clintons were no longer useful, the Left suddenly discovered that Broaddrick’s story was credible.

The Broaddrick-dismissing media outlets are now flagellating themselves for not playing this unproven Carroll story even “bigger.” This is why most Americans think the “news” media are partisan hacks who define what is “news” and not “news” based on how it can advance (or inhibit) the Left’s crusade to fundamentally transform America.