In the election cycle dominated by Donald Trump, it should not be much of a shock that the first “October Surprise” came from Access Hollywood. In a 2005 outtake, Trump told Access co-host Billy Bush how he could rudely grab women’s genitals and get away with it because “when you’re a star, they let you do it. You can do anything."

They say it was a recent discovery. No media October Surprise there, no siree. 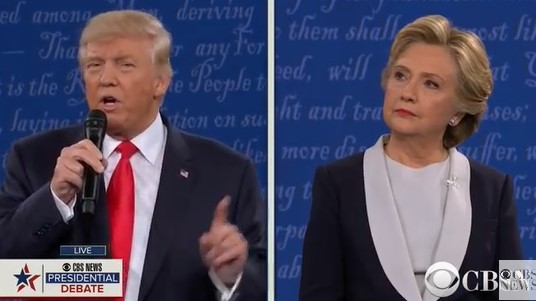 The Clinton-enabling press sprung into action, smelling Trump’s blood in the water. None of them seemed to reflect for five seconds that Trump could be describing Bill Clinton’s modus operandi.

Trump talked as Clinton did. Their moral outrage was as phony as Mrs. Clinton’s. “This is horrific,” Hillary shamelessly tweeted. “We cannot allow this man to become president.”

Meanwhile, women who were actually harassed by Bill Clinton were never offered any support from Hillary or her feminist army in the press. In February of 1994, Paula Jones held a press conference to accuse  Gov. Clinton of  exposing himself and requesting oral sex in a hotel room in Little Rock. Other than 16 seconds on ABC, the media decided that wasn’t news...until Jones filed a lawsuit and the Clintons hired a lawyer three months later.

But the Jones case vanished from the press and played no significant role in the 1996 campaign – 11 network stories in the entire election year. Half of those were perfunctory notices of legal claims, and the other half focused on the RNC making an ad mocking Clinton for claiming he couldn’t be sued because he was on “active duty” as Commander-in-Chief. Once Clinton was safely re-elected, then a few establishment media outlets decided maybe there was something to this Jones thing.

Eventually, the Jones lawsuit led to the deposition of intern Monica Lewinsky, so the story became a huge national nightmare – in part because both Clintons claimed for months that Lewinsky was lying. Hillary even said on ABC when the story broke that Monica misunderstood that Bill is just “a happy, friendly, loving, kind, good person.” He “reaches out to all kinds of people.”

ABC enabled that. No laugh track. No skepticism. Gullible to a fault.

The emergence of Lewinsky led to other women who said they were assaulted by Bill Clinton. In March of 1998, CBS’s 60 Minutes interviewed Kathleen Willey, who said the president fondled her breast and put her hand on his crotch during a 1993 Oval Office visit. She was begging for a job. The Clinton team quickly put out supportive letters Willey had written Clinton to erase the idea she was assaulted, and the story vanished. A federal judge ruled in 2000 that the Clinton White House violated the Privacy Act with that disclosure. The Big Three networks (combined) gave that 66 seconds.

This pattern even repeated itself with Juanita Broaddrick, who declared in a Dateline NBC interview in 1999 that Bill Clinton raped her ("Better put some ice on that") in a Little Rock hotel room in 1978. On the evening newscasts, CBS aired one story, and ABC and NBC did nothing – even though NBC secured the interview!

When Donald Trump invited these women to the second debate, guess what the networks did. They attacked Trump for going “personal.”

So ask yourself this question: How many times since 1994 have the TV interviewers asked Hillary what she did or didn’t do to smear these women? Try and find one occasion.

As repugnant as they were, Trump's offense was words. The Clintons' offenses were their actions.

The cynicism boggles the mind.