When FBI director James Comey came before the press to deliver his bizarre proclamation that Hillary Clinton had lied relentlessly about her private e-mail server, but shouldn't be prosecuted because no prosecutor would ever dare take her to court, except prosecutors all over the country rose to say they'd do so immediately, many were shocked and angered. One industry was thoroughly embarrassed: the media-elite "fact checker" websites and projects, from PolitiFact.com to FactCheck.org to the "Fact Checker" column at The Washington Post.

These so-called guardians of truth felt forced to revise and upgrade their "Pinocchio" counts to reflect the fact  that so many pivotal things Mrs. Clinton had claimed about her emails turned out to be falsehoods. It's all well and good that they had to change their rulings, but how effective were these watchdogs in the first place?

James Taranto of The Wall Street Journal describes the problem well: "Frequently they accuse politicians of dishonesty because the journalists favor a different interpretation of facts that are not in dispute. Sometimes their 'rulings' are mere opinions on matters about which they do not know the facts, or that are not factual questions at all." 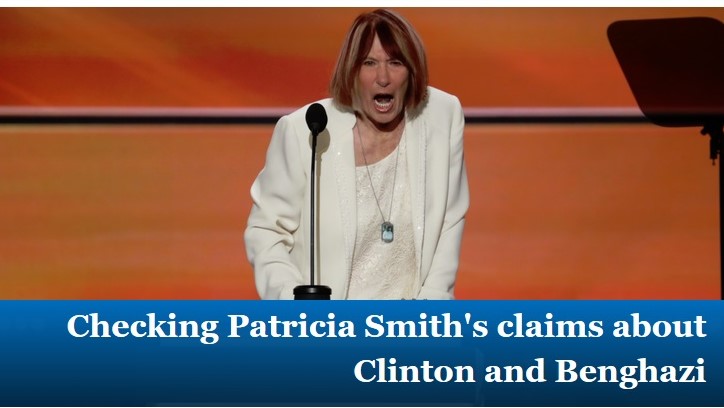 This could not stand. PolitiFact put a picture of this angry mother on their home page with the headline "Checking Patricia Smith's claims about Clinton and Benghazi." The suggestion? Mrs. Smith probably told some whoppers on the floor in Cleveland.

But the article that followed was, to borrow from Taranto, "mere opinions on matters about which they do not know the facts." PolitiFact creator Bill Adair wrote "We can't put Smith's claims on the Truth-O-Meter. But here, we'll lay out the case for and against the allegations against Clinton and let readers come to their own conclusion."

When the review of what the survivors of the four men lost in Benghazi said was finished, PolitiFact merely threw up its hands, claiming that none of these grieving relatives can really be trusted as reliable providers of fact.

"It is impossible to know with certainty what Clinton told these families in brief conversations at a private reception only three days after Benghazi. Some, but not all, family members who have spoken to the media said Clinton mentioned a video or protests in their meeting. Some said she didn't mention a video. Clinton says she did not."

To Politi-“Fact,” Mrs. Clinton’s record of lying about her server doesn’t tilt the scales of credibility. In another article on Monday night, the website suggested grieving relatives might have “fuzzy” memories. Adair even suggested that even if Hillary was incorrect, she might not have been lying: “If she did say something about the video, would it have been an intentional lie? It’s very possible that this is one of the many conflicting pieces of intelligence that the administration was working with at the time.”

Adair claimed no one can really claim Hillary lied: “There simply is not enough concrete information in the public domain for Rubio or anyone to claim as fact that Clinton did or did not lie to the Benghazi families.”

Adair and his ilk aren’t “fact checking.”in any way. They’re masquerading in “fact checker” costumes to engage in shameless speculation, blather, and spin toward the Democrats.