The Obama years may be winding down, but our Obama-loving media never stops being hypersensitive about the man. CNN’s latest poll asked respondents “Do you happen to know what religion Barack Obama is?”and “Where was Barack Obama born, as far as you know?”

A major American media outlet asking these basic biographical questions after Obama’s been president for six and a half years seems to be asking “How inadequate are we?” But what they’re actually fishing for is a “crazy conservative fringe” argument now that Donald Trump is on top of the GOP presidential race. 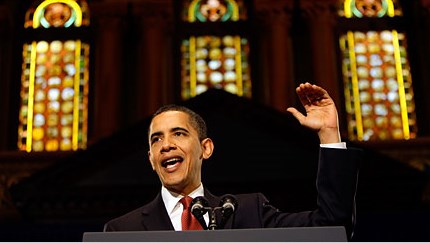 The primary subject of CNN’s poll was the Iran deal, where they found that the American people were deeply skeptical, with 60 percent saying Iranian cheating was very likely. Obama drew a 59 percent disapproval rating on handling Iran. CNN buried that result.

But CNN’s John King ran out with the birther/Muslim results on the Sunday show “Inside Politics” on September 13, comparing the Republican breakdowns on those questions and then the Trump-supporter results. Seventy percent of Republicans accept Obama’s American birth, and 61 percent of Trump fans.

Fifteen percent of Democrats said Obama was Muslim, but King didn’t mention it.

This Obama-coddling tendency grew dramatically on September 17 when liberals objected to a town-hall questioner in New Hampshire insisting Obama was a Muslim, and Trump failed to correct him.

Ask yourself this question: Have the media ever objected to a questioner at a Democratic campaign event smearing a Republican candidate? Has there never been a 9-11 truther embarrassing a liberal politician? The media couldn’t and wouldn’t locate such a person. They’re a missing person on an ideological milk carton.

Journalists should be fact-checkers on any president’s biography. But with Obama, the ardent advocacy spills over everywhere. On Reliable Sources on September 20, CNN host Brian Stelter challenged Newsmax host Steve Malzberg, “Doesn't every responsible journalist and every responsible opinion analyst type have a responsibility to say, loudly and clearly, every time they talk about this, ‘The president was born in the U.S., the president is a Christian’?"

Stelter lectured “I think it does damage to our country, damage to the viewers at home when Trump sows doubt in this way, doesn't just explicitly answer the question.” When Malzberg shot back that Obama called his opponents “crazies” and compared them to Iranian Muslim “hardliners,” Stelter complained “I don't think it's the same as delegitimizing the president of the United States.”

These media liberals didn’t screech when Hillary Clinton said Republican views on women were like Muslim terrorist groups. They actually hailed it as “coming out swinging” with “tough talk.” These journalistic “professionals” didn’t blink in 2012 when Sen. Harry Reid maintained with no evidence Romney didn't pay taxes.

Most importantly, none of these “fact checkers” could be bothered in 2012 when liberal Washington Post assistant editor David Maraniss blew up Obama's fairy-tale memoir on his birth story, that his father stayed with him until he was two. In real life, his mother left Hawaii within a month. But who cares about that kind of inconvenient truth?