Midge Decter, RIP; Video of Her At MRC’s DisHonors Awards in 2005 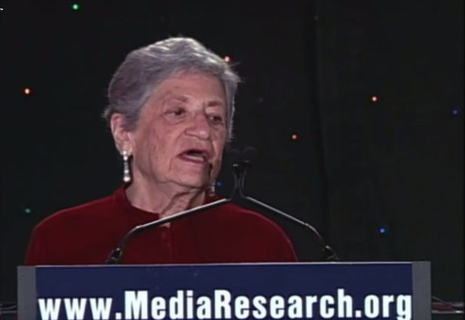 Author and leading neoconservative intellectual Midge Decter passed away on Monday, May 9, at age 94.

At the Media Research Center’s “2005 DisHonors Awards: Roasting the Most Outrageously Biased Liberal Reporters of 2004,” Decter accepted in jest, on behalf of Janeane Garofalo, the “I’m Not a Political Genius But I Play One on TV Award.”

In the video below, from the April 21 gala held in the Grand Ballroom of the J.W. Marriott in Washington, D.C., you’ll see Neal Boortz announce the winner of the category and show the clip that earned Garofalo the “award,” then hear the humorous acceptance remarks from Decter.

MRC President Brent Bozell observed, “Midge Decter was a class act: brilliant, dedicated, humble and by God, was she witty!”

I will always remember her as an enthusiastic annual participant as a judge helping to choose, at year end, the worst media quotes of the year for the MRC’s Best of Notable Quotables. On her ballot she would make biting comments about the worst wackiness from media figures; she was particularly appalled by Eleanor Clift, jotting down quips which always made me chuckle.

For a woman of so much accomplishment and influence, Decter always wanted to be simply identified as an “author.”