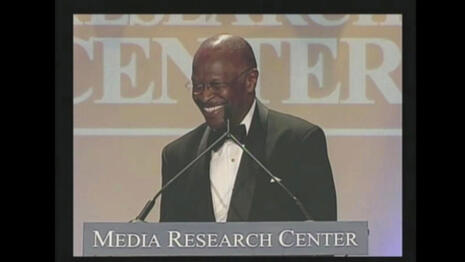 To remember him in a light-hearted moment, check out the video below to see his humorous side, as the business leader, presidential candidate, radio talk show host and inspiration to many conservatives, cued up funny clips at the MRC event. Enjoy as he laughs along and ad-libs his takes on the clips.

“In 1977, Herman Cain joined the Pillsbury corporation. Within three years, at the age of 34, he’d risen to the position of Vice President of corporate systems and services. But he resigned this position to follow another career path, this time in the restaurant industry. By 1994, he’d been elected as Chairman of the Board of Directors of the National Restaurant Association. All of that, without the help of the Democratic party, ladies and gentlemen. It’s just an amazing, amazing story.”