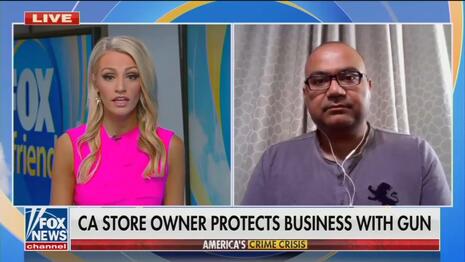 On Tuesday's Fox & Friends, the show had on as guest the owner of a jewelry store in San Francisco who used his handgun to scare away a group of smash-and-grab robbers who had invaded his store, as has become a frequent occurrence in soft-on-crime California.

And on Wednesday, the Fox & Friends First show interviewed an Ohio gas station owner who used a gun to stop an armed robbery attempt. In both cases, surveillance video existed that showed the store owner in action defending his business.

As small businesses fall victim to smash and grab robberies, take a look at this incredible moment. A California store owner took matters into his own hands. A would-be robber rushing into this Bay Area jewelry store smashing a display case only to be confronted by the owner who had his legally owned handgun, causing the suspect and his accomplices -- one who also had a gun -- to flee.

Usman Bhatti -- the owner of Maaz Jewelers -- recalled using his gun to scare away the group of robbers, and then blamed the lenient laws of the state for encouraging such criminal behavior.

On Wednesday's Fox & Friends First, at 4:29 a.m., Ashley Strohmier as fill-in co-host introduced her guest, Raj Patel, who runs a gas station in Ohio, and got him to recount how the attempted robbery began. Patel explained that a customer went back to his car and got a shotgun, leading Patel to use his own gun to scare him away.

These important stories were sponsored in part by Consumer Cellular, and Farmers Insurance. Their contact information is linked. Let them know you appreciate them supporting such news that counters the negative reaction to guns pushed by most of the media.

CARLEY SHIMKUS, FILL-IN CO-HOST: As small businesses fall victim to smash and grab robberies, take a look at this incredible moment. A California store owner took matters into his own hands. A would-be robber rushing into this Bay Area jewelry store smashing a display case only to be confronted by the owner who had his legally owned handgun, causing the suspect and his accomplices -- one who also had a gun -- to flee. The owner of Maaz Jewelers, Usman Bhatti, joins us now, Usman, good morning to you. This is such a scary situation. What was this moment like for you?

USMAN BHATTI, OWNER OF MAAZ JEWELERS: Good morning. Yeah, it was -- it was terrible. Lately, you know, like, incidents started like in October, so it's been like four months, and then, we've all been waiting for that moment like, you know, they're going everywhere. Lucky I was standing outside, and I was, you know, like, I really stopped them. So that's when (inaudible)... It's been sad.

SHIMKUS: Yeah, well, I understand police showed up within minutes, and when they did show up, they weren't even surprised that something like this happened -- and it's for good reason -- because these smash-and-grab robberies are happening all the time. Why do you think there is -- has there been such an increase in crime in California and across the country?

BHATTI: Law. Because they know they will get away with it, and nothing has happened so far, and then it's been -- nobody's doing anything. Even just now, I think, you know, they got all the videos -- they've been working on them -- but I haven't heard anything. Nothing happened. So, I mean, they know that nothing is going to happen, and even if they were to get caught, they're all teenagers. So imagine how long they're going to go to jail for, and then, after that, they will come out ... with a clean record right up to 18 years, and they'll be more professional.

ASHLEY STROHMIER, FILL-IN CO-HOST: Walk us through what happened from your standpoint. The guy walks in -- he walks back out -- did you just have a bad feeling about him? What prompted you to kind of, you know, stand your ground? Or did he have to come in with the shotgun before you acted?

RAJ PATEL, GAS STATION OWNER: First, he comes in as a customer, and he tried to buy a candy and a chips. And he put it on the counter, so I scanned it, and he told me that he will be right back. He wants to know what kind of cigarette this looks like, plus somebody is inside the car. And so I was thinking he would be a minute, so I was drinking my bottled water. So I was drinking water, and, within a few seconds, he walked in with a shotgun, and he pointed it at me, and he told me -- he was cussing strong -- and he told me to "give me all your money," or otherwise, "I will kill you." So I had to put my water bottle down, and the story starts from there.

STROHMIER: Well, I'll tell you what, just watching this video play on loop, it doesn't seem like there was any hesitation on your part. Correct me if I'm wrong, but you saw the gun -- you pulled it out, not thinking, but that is your right, to protect your business and yourself.

PATEL: Yes. Yes. I didn't hesitate to fire the shot.

STROHMIER: What is your message to -- and while I'm talking about this, can we pull up the mugshot of this suspect for a second so you can take a look at him. This is the suspect that was arrested. You fired shots -- you called it the "warning shots" -- do you think that firing that shot is what helped police maybe slow him down -- police eventually catch up to him?

PATEL: Yes, because as soon as I fired the shot, he dropped his gun, and he left -- he left the premises, and he ran towards Mount Sterling, which is our town, and I called the police, and police chased him down and caught him with helicopter help.

STROHMIER: Okay, before I let you go, I do just want to point out, this suspect, he's accused of being involved in at least two other robberies in another county -- that is, according to police. So good for you for standing your ground and being able to protect your business and yourself.