On Wednesday's Cuomo Pime Time, as White House deputy press secretary Raj Shah appeared as guest to debate immigration reform, CNN host Chris Cuomo accused the Trump administration of portraying illegal immigrants as "monsters" and "villains," and claimed that "white supremacists" are a bigger threat to the country that the White House will not take seriously enough.

At about 9:13 p.m. ET on the January 17 show, as the two debated whether the safety of American citizens like Kate Steinle is more urgent to deal with, or the wellbeing of illegals like Jorge Garcia who might be deported, Cuomo first made his complaint about illegal immigrants being portrayed negatively by the White House. He also referred to "illegal immigrants" as merely being "as you call them" as if it were not an accurate description:

You guys have a pretty intentional effort to make illegal immigrants -- as you call them -- monsters. You put out this DHS report today which fictionalizes the risk of terror that is represented by people who come into this country illegally. We understand that that's against the law -- we understand that that has to stop -- but why make them all into villains? Why inflate statistics and cherry pick to make people afraid of these people? Why do that?

After Shah denied that the White House was doing so, the CNN host then jumped back in to misstate the numbers from a DHS report about the percentage of terror convictions that involve noncitizens: "Then why would you put out a report, Raj, that says basically three out of four of them may be terrorists? That was the point of that report that taxpayers paid for."

Shah corrected him: "The report said that three out of four people that have been convicted on federal terrorism charges were foreign nationals who've either come here illegally or through the legal immigration." 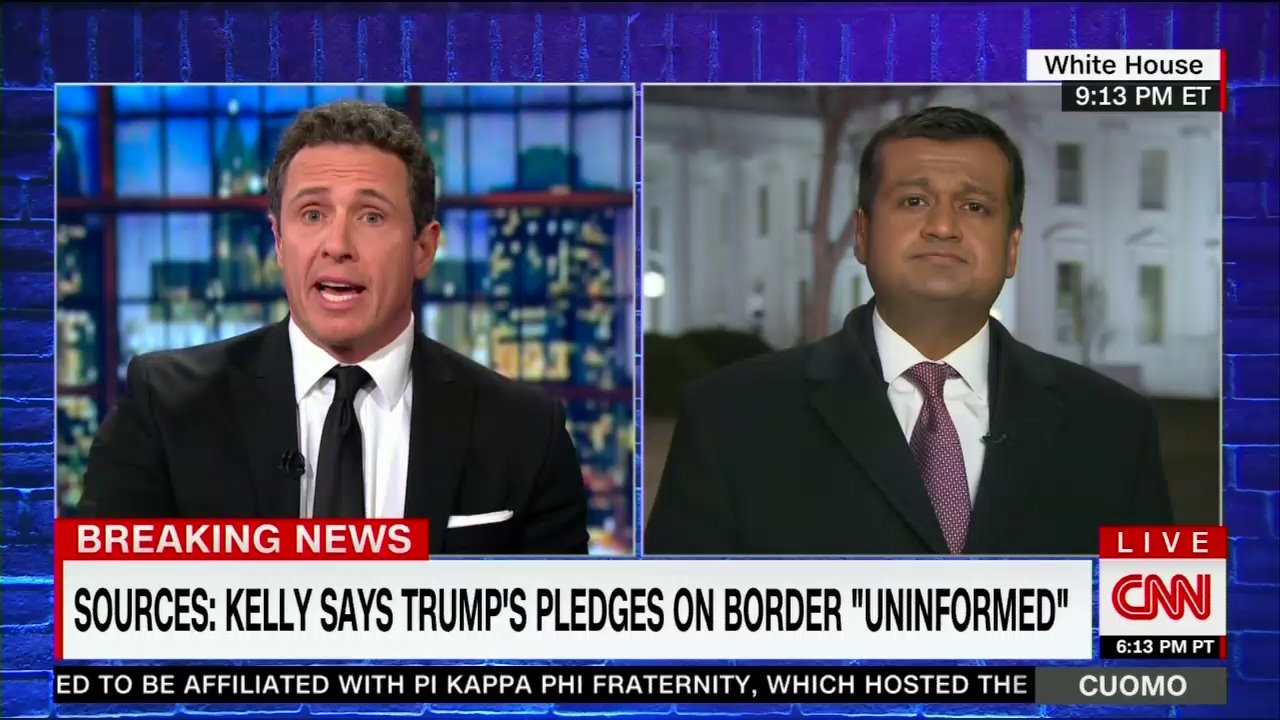 Because of the repeated interruptions by Cuomo, Shah asked, "Are you going to answer the question yourself? Or can I answer it?" leading the CNN host to snark: "Sometimes it provides a better answer to some of these questions because maybe you're ducking."

A few minutes later, Cuomo picked up on a common liberal talking point that white supremacists have supposedly committed more terrorism in recent years than Muslims or noncitizens -- but only if the 9/11 attacks are not included:

But what I'm saying is, if you were really worried about who's killing people in the name of terror in this country, you'd be focused on white supremacists, That's your biggest threat. Ask the intel community -- they'll tell you the same thing. But they're not your enemy apparently. Your enemy are these people who come in illegally, and you want to make them look as bad as possible. And I don't understand how that goes in with a bill of love, Raj. Explain it to me.