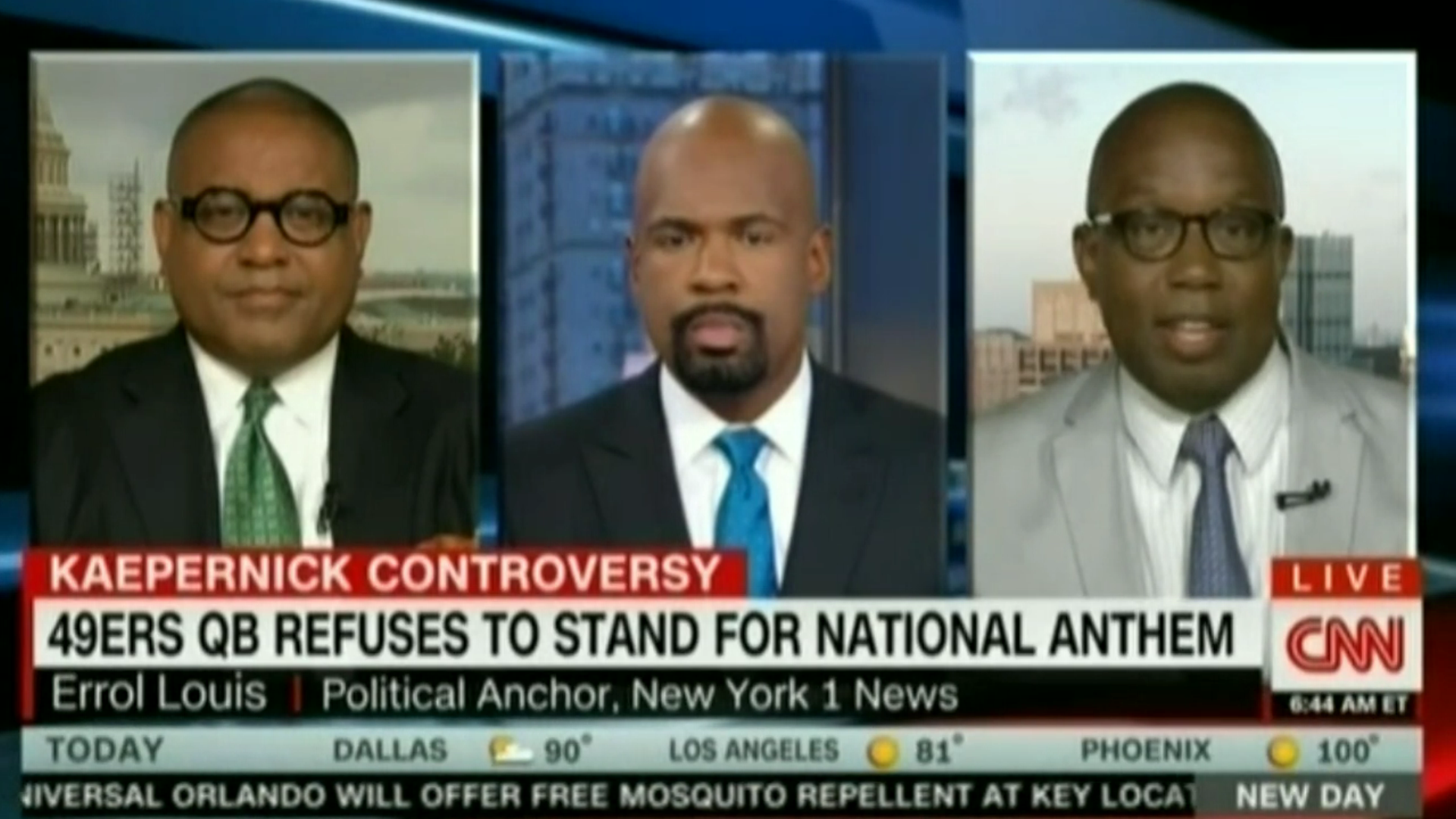 On Sunday's New Day on CNN, during a discussion of the NFL's Colin Kaepernick refusing to stand during the National Anthem, and his subsequent statement accusing the U.S. of being a nation that "oppresses black people," citing violence by police, both guests expressed support for him in the aftermath of his expression of anti-U.S. sentiment.

CNN political commentator Errol Louis -- also a political anchor for Time Warner Cable News -- lauded the NFL star's decision as "weighty" and, after recalling that his career could be at risk by his actions, sympathetically concluded that "we should wish him the best of luck in getting through this."

CNN host Victor Blackwell asserted that Kaepernick was "starting an important conversation" with his actions as he introduced the segment:

An NFL quarterback caught in controversy this morning, but also starting an important conversation. Colin Kaepernick refused to stand during the National Anthem before Friday night's game. Some people are calling him "shallow," "ungrateful." Others, though, are defending his right to stand up or sit down for whatever he believes. This is a statement from Kaepernick, and it's a quote.

Blackwell then read some of Kaepernick's statement on the matter:

I am not going to stand up to show pride in a flag for a country that oppresses black people and people of color...

To me, this is bigger than football, and it would be selfish on my part to look the other way. There are bodies in the street and people getting paid leave and getting away with murder.

After the CNN host turned to Louis, the CNN political commentator began:

A very interesting young man and a very interesting and weighty decision that he made. Let's keep in mind, he's trying out. He's essentially on a job interview, one of the toughest job interviews you can imagine, trying to become the starting quarterback a couple of weeks out from opening day. This is the last thing that he needs, and so let's take him seriously when he says that this means a lot to him. He's putting a lot on the line, not just his endorsements but indeed his job.

And, you know, I am one of the people who believes that, you know, free speech means free speech for everybody, especially the speech that you don't want to hear. So it's not something that I would have done during a job interview or pretty much any other time, and I think he's going to get a lot of pushback. It's going to cost him a lot in the way of condemnation, possibly endorsements, possibly the job that he's seeking. But that, I think, just underscores how serious he is about this, and, you know, we should wish him the best of luck in getting through this.

Blackwell's other guest, A. Scott Bolden -- who served as chairman of the Washington D.C. State Democratic Committee -- gave a more full-throated endorsement of Kaepernick and his criticism of the police. The former Democratic official began:

Athletes historically, when they stand up with a social consciousness, have always been roundly criticized because fans -- black, white, yellow, and brown -- put them in a sports box and say that you cannot move out. Mohammed Ali moved out, and other Olympic athletes have historically moved out, and they have been roundly criticized. That comes with courage and exercising your First Amendment.