Appearing on Tuesday's New Day, liberal Daily Beast contributor and recurring CNN guest Dean Obeidallah went ballistic after a fellow guest and Donald Trump supporter recalled that Khizr Khan has a history of ties to the Clintons as the immigration expert was an employee of the law firm Hogan Lovells LLP, which not only has represented the Clinton Foundation but also worked on immigration cases involving the controversial EB-5 visa program.

After former South Carolina Lieutenant Governor Andre Bauer recalled Khan's connections to the Clintons, the two got into a heated debate as Obeidallah incredulously accused the Trump supporter of "smearing" Khan by merely introducing his links to the Clintons into the political conversation.

Senator Grassley even pointed out there are inconsistencies and really not checks and balances in a program that's let too many folks in that are questionable, individuals that probably should never have been allowed in our country.

When it was Obeidallah's turn to speak, he fumed:

After Bauer injected, "Well, tell me what I did to smear him. What did I say that smeared him?" the Daily Beast contributor shot back: "You just went after his character."

The two then went back and forth for the next minute with Obeidallah insisting that recalling Khan's ties to the Clintons amounted to "smearing" his "character."

Below is a transcript of the relevant portion of the Tuesday, August 2, New Day on CNN:

JOHN BERMAN: You're an elected official. You have political experience. Get Donald Trump out of this right now. How does Donald Trump move past this, politically speaking, over the next few days? What advice would you give him?

FORMER LIEUTENANT GOVERNOR ANDRE BAUER, (R-SC): Well, as he's campaigning, he'll shift hopefully to other issues, but this is an issue. The people of America are concerned for their safety. I admire the Khan family for their sacrifice. My family gave their life as well. My grandfather is buried in Arlington as an admiral. But there is a bigger problem here. We have a problem with radical Islam. We do need to engage in a discussion about how you vet people that are coming into this country.

Mr. Khan worked for the Clintons. There is a direct connection. Nobody wants to engage in that because of the loss of a child, which is a terrible thing, but again, he is continuing to push this, too. He is making it political, and there is a bigger tie to the Clintons. He's worked for them. He's worked for the EB-5 program, which is controversial. Senator Grassley even pointed out there are inconsistencies and really not checks and balances in a program that's let too many folks in that are questionable, individuals that probably should never have been allowed in our country. 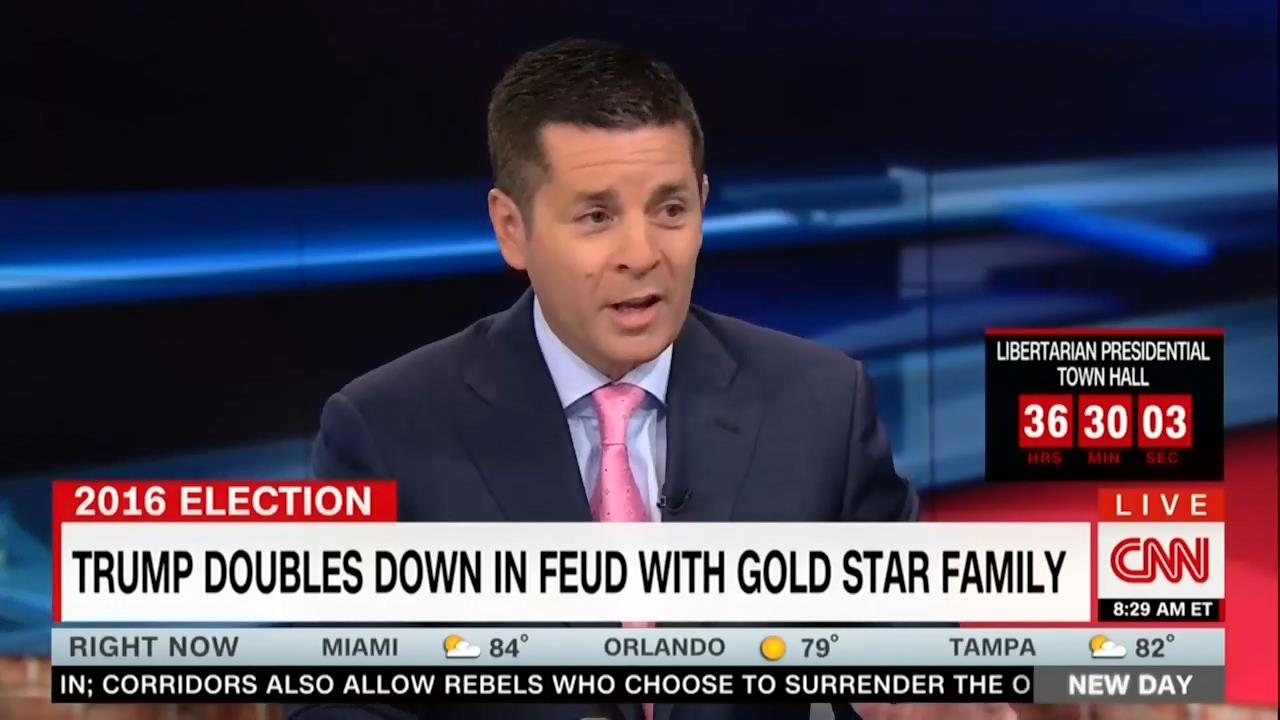 BAUER: Well, tell me what I did to smear him. What did I say that smeared him?

OBEIDALLAH: You just went after his character.

BAUER: What was incorrect?

OBEIDALLAH: All Donald Trump had to do was say, like most human beings, most Americans would say, "I recognize their sacrifice, and my sympathy and heart goes out for their family." End of story.

BAUER: And I said that

OBEIDALLAH: Not you, sir. I'm talking about Donald Trump, the person that you're fighting for.

BAUER: But I didn't smear him in any way. Again, you're saying-

OBEIDALLAH: You just did by going into his background where he worked with Hillary Clinton. What does that matter? Radical Islam has nothing to do with-

BAUER: Well, that's true. If that's not true, then why is that smearing?

OBEIDALLAH: It has nothing to do with Mr. Khan.

OBEIDALLAH: The issue was -- no, the fact's matter, of course, sir. Mr. Khan's point was, his son was-

BAUER: Well, you just said I smeared him-

OBEIDALLAH: You did because you connected him-

BAUER: -because I said who he worked for.

OBEIDALLAH: You're like he worked for Hillary Clinton like that somehow makes him unqualified to speak about his son-

BAUER: Well, if that is incorrect, then I'm wrong, but correct me if I'm incorrect.

OBEIDALLAH: Here's the reality. Here's the truth. The bigger question was, is this having an impact?

BAUER: Yeah, facts matter, but not to you.