CNN, MSNBC Give Planned Parenthood More Than One Interview Per Day 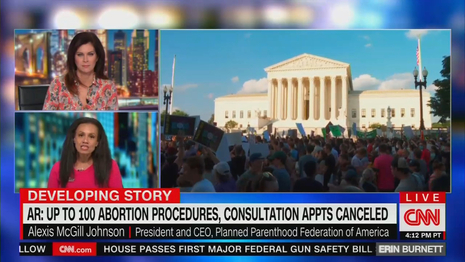 Are CNN and MSNBC the official mouthpieces of the abortion movement?

MRC analysts combed all 6:00am to 12:00am ET coverage on CNN and MSNBC between May 2 – the date the draft was leaked – and June 27, and found that former and current Planned Parenthood officials had appeared as guests a combined total of 65 times. That amounts to more than one interview per day on average.

MSNBC conducted 48 such interviews  during the specified 57-day period, while CNN was responsible for the remaining 17. These interviews amounted to a combined 251 minutes (4 hours and 11 minutes).

On both May 2 and June 24, MSNBC’s The Last Word with Lawrence O’Donnell hosted the same three Planned Parenthood-affiliated guests within a single hour: Cecile Richards, the organization’s former president; Kelley Robinson, the current vice president of advocacy and organizing; and Minnesota Senator Tina Smith, whom the Planned Parenthood Action Fund notes is “the highest ranking former Planned Parenthood executive in U.S. politics.”

By any measure, an average of more than one interview per day over nearly two months is remarkably high. This frequency indicates just how friendly a relationship Planned Parenthood enjoys with these two networks – which in turn speaks volumes about the political agenda being pushed at CNN and MSNBC.

This longstanding friendship between the leftwing media and Planned Parenthood also recently resulted in a classic “revolving door” scenario for former CBS reporter Kate Smith. This past April, a mere 10 months after leaving her abortion-focused beat at CBS, Smith was hired by Planned Parenthood as their senior director of news content. She has since represented the organization in two friendly interviews on CNN’s Reliable Sources.

Given how emotionally invested the leftwing media are in the institution of abortion, it’s no surprise that they would have an equally fond view of the nation’s largest abortion provider.