Broadcast networks ABC, CBS, and NBC have been consistent cheerleaders for the nationwide protests against police brutality, offering nearly 12 hours of coverage (710 minutes) over the past seven days on just their flagship morning and evening news shows. But despite dedicating all of those hours of airtime to the protests and riots, these networks have barely breathed a word about those who have died in the resulting violence.

MRC analysts examined all three broadcast networks’ major morning and evening newscasts between May 28 and June 3, and found that the total airtime spent on those who died during the past week of riots accounted to just four and a half minutes, or less than one percent of the total protest-related coverage.

CBS spent just a single minute (61 seconds) on individuals killed during the riots, amounting to half a percent of their 201 minutes of protest coverage. ABC gave the victims 91 seconds, or 0.76 percent of their total 200 minutes spent on the demonstrations. On NBC, the victims received just over two minutes, or 0.7% of the network’s 309 minutes of protest-related programming. 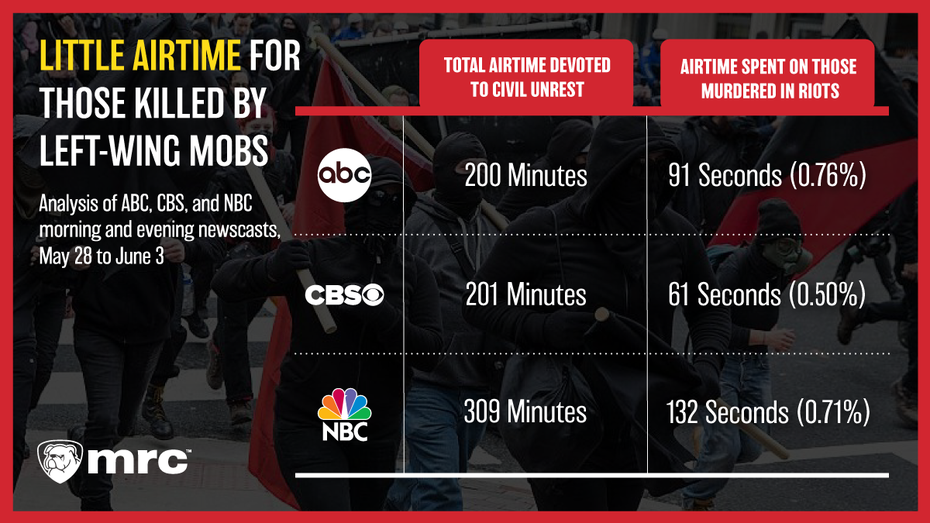 According to the Associated Press, at least ten individuals have been killed in the riots over the past week, including at least three unarmed African-Americans.

Early Tuesday morning, looters in St. Louis shot and killed 77-year-old David Dorn, a retired police captain who had been attempting to protect a friend’s business. Dorn’s murder received less than a minute of combined coverage across all three broadcast networks.

But while none of the three broadcast networks could be bothered to spend even a minute on Dorn, at least they mentioned his name. That’s more than can be said for Italia Marie Kelly, 22, who was shot and killed while attempting to leave a Davenport, Iowa protest after it became violent on the night of May 31.

There are others whose deaths either were glossed over or were ignored outright by the broadcast networks. These included David Patrick Underwood, a federal law enforcement officer who was shot while providing security at an Oakland courthouse, and Chris Beaty, a business owner and former Indiana University football player known as “Mr. Indianapolis.”

Television journalists have made no secret of their support for the nationwide protests over the past week. But perhaps because of that support, they’ve been reluctant to discuss the deaths that have taken place across the country as protests devolved into riots.

When one considers just how little time the broadcast networks have spared for the victims of these riots, their insistent chorus of “mostly peaceful, mostly peaceful” starts to sound more like damage control than factual reporting.

For this report, the Media Research Center analyzed all coverage of mass protests and civil unrest on ABC's Good Morning America, ABC's World News Tonight, CBS This Morning, CBS Sunday Morning, the CBS Evening News, NBC's Today, NBC's Sunday Today and the NBC Nightly News between May 28 and June 3. News stories that were only about the investigation into George Floyd's death were not included.