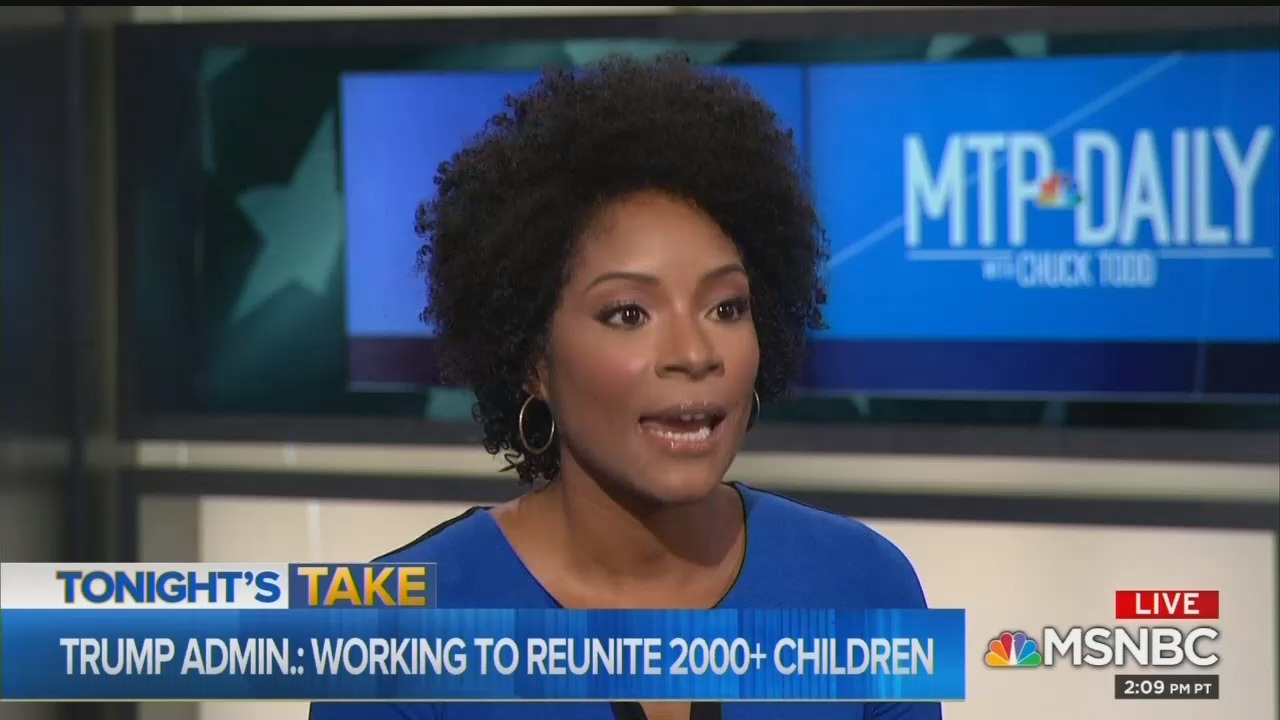 While many in both the Democratic Party and the media would concur that Democratic Congresswoman Maxine Waters (CA) hurt her party’s image on Sunday when she encouraged her supporters to aggressively confront members of the Trump administration, MSNBC’s contributors appear not to have gotten the memo. Numerous guests on the cable network were reluctant on Monday to condemn Waters for her comments, with some, such as MSNBC political analyst Zerlina Maxwell, outright endorsing the Congresswoman’s stance: “Polite discourse is inappropriate when there are babies in cages.”

Presidential historian and MSNBC regular Jon Meacham gave his cynical take on Live with Craig Melvin. “You reap what you sow,” he intoned ominously, adding that “folks who work for [Donald Trump]” ought not “be surprised at this reaction.” Melvin concurred, responding with a rhetorical question for the panel: “Are folks surprised at what they’ve gotten? Did they not know what they were voting for?”

Meanwhile, Center for American Progress President Neera Tanden sidestepped the comments by Waters and instead resurrected outrage over President Trump’s remarks about John McCain: “The Trump Administration and their allies lecturing anyone on civility is ridiculous.” She continued, “Let’s talk about something that actually matters in peoples’ lives, which is these kids and their parents, and talk less about the treatment of Sarah Huckabee Sanders.”

On MTP Daily later that evening, MSNBC political analyst Zerlina Maxwell attempted to justify the Congresswoman’s remarks and applauded Waters as a “leader of the resistance.”

Stand-in host Steve Kornacki pressed Maxwell on her answer, asking whether the Democrats had “a responsibility” to decide “what kind of response” was appropriate in protesting the Trump administration’s border enforcement measures. “What would an appropriate response look like?” Maxwell spat back. “How polite do we have to be to people that are putting babies in cages?” She continued:

I would say that we don’t have to be polite to those folks. I would say that the polite discourse is inappropriate when there are babies in cages. We’re calmly discussing this, and I think that this is a moment – it’s an inflection point for this country. There are babies in jail right now in the United States, and if we look back in the history books and we were all politely discussing whether that was appropriate, I think shame is on us.

To their credit, CNN talking heads were nearly unanimous in their condemnation of Waters for her remarks – with the exception of recurring guest Symone Sanders, who complained that people criticizing Waters didn’t “get it.” But most of the critiques were aimed at the optics and the electoral ramifications of the Congresswoman’s behavior, rather than addressing the immorality of harassing one’s political opponents.

“On its face, that’s true,” agreed New York Times White House Correspondent Maggie Haberman, who worried that the Congresswoman’s words would make it “very hard for people to be upset about the demonizing that the President is doing.”