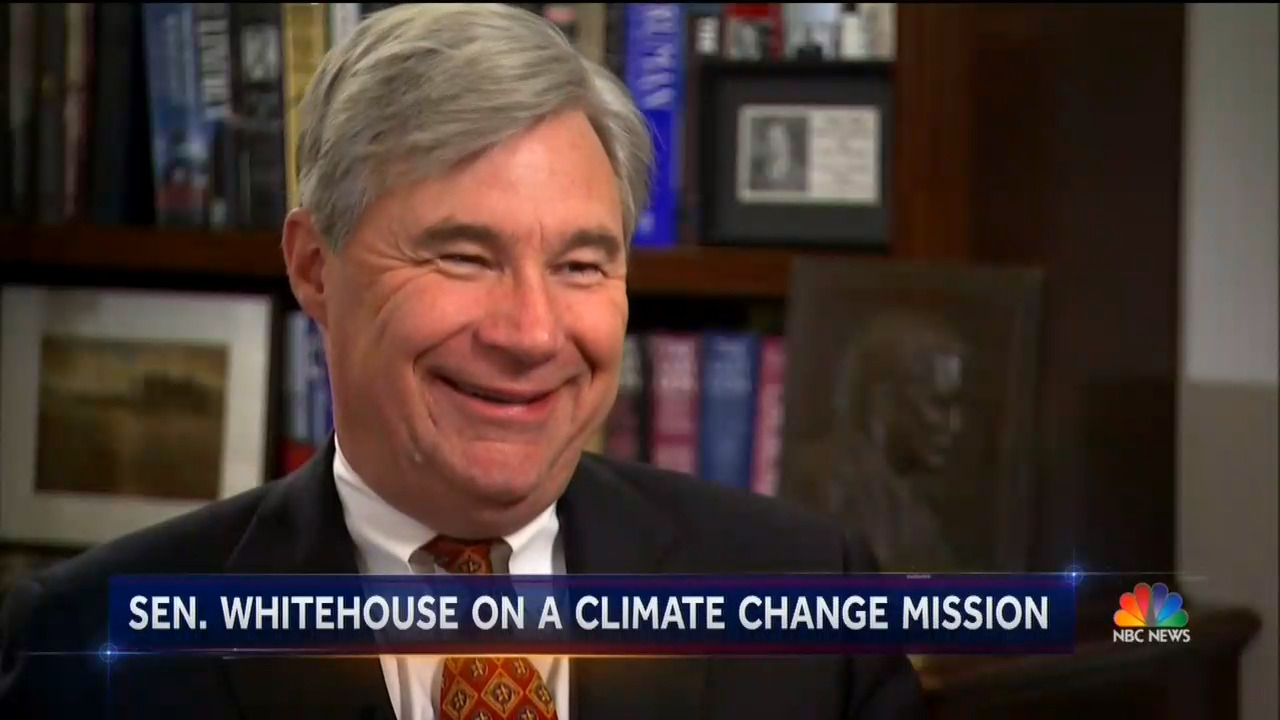 To the left, climate change is no longer a partisan issue; it’s merely a question of believers versus heretics. Perhaps that is why NBC felt justified in airing a Sunday Nightly News segment bursting at the seams with praise for liberal Democratic Senator Sheldon Whitehouse (RI), whom NBC chief climate change correspondent Anne Thompson lauded as “part teacher, part Don Quixote.”

Sunday Anchor Kate Snow introduced this segment, which closed out the Earth Day episode of the newscast. She prefaced the piece with a cutesy remark about the “renewable energy” with which Whitehouse delivered his weekly climate change alarmist speeches on the Senate floor.

Thompson generously described Whitehouse as “part chemist” while a clip played of the Senator shrewdly observing: “I produce carbon dioxide as I exhale.” Unsurprisingly, she failed to mention any of his numerous gaffes during his tenure in the Senate, instead embellishing on the “part chemist,” label by adding “part teacher” and “part Don Quixote,” to the list of epithets.

According to Thompson’s exposition, Whitehouse has been hyperventilating about the hot-button issue weekly for six years, which Thompson adoringly framed as “imploring his colleagues to do something about climate change.” She offered no details about what that nebulous “something” might entail.

Alas, the plucky Senator rarely draws a crowd for his weekly proselytization. “His urgent, oft repeated message, often echoing around an empty chamber,” Thompson lamented. “It can be a very lonely feeling,” Whitehouse explained in a snippet of an interview NBC had conducted for the segment. “At the heart of this conflict is a battle between truth and science, and power and lies,” he opined, continuing:

It's about lobsters, polar bears, beaches. It's about jobs and success in the new emerging green economy. But above all of that I think it's also about, what is our country?

Thompson closed the piece with flowery prose: “A weekly reminder for those who will listen that every day is Earth Day.”

Presumably after six years of consistently hammering away at the issue, the Senator has penned some kind of legislation intended to tackle the dreaded subject of climate change. Yet such policy prescriptions were conspicuously absent from the NBC piece.

This dearth of information relegated the segment to a puff piece propping up a Democratic Senator – one who conveniently happened to be up for reelection in 2018. A cynic might go so far as to call it a free campaign ad for Whitehouse. One would be hard-pressed to find a comparably friendly network news segment about a Republican from the past thirty years, except perhaps in the case of those who bucked the party line in favor of more liberal policies.

To read a full segment of the transcript, click "expand" below:

KATE SNOW: Finally tonight, on this Earth Day, we want to introduce you to a U.S. senator whose passion about the environment knows no bounds. He brings his own kind of renewable energy so to speak to the cause each week on the Senate floor. Here`s our chief environmental affairs correspondent Anne Thompson.

ANNE THOMPSON: For six years on the Senate floor, Sheldon Whitehouse has been part chemist--

SENATOR WHITEHOUSE: I produce carbon dioxide as I exhale.

WHITEHOUSE: We have the nation`s first offshore wind farm.

THOMPSON: – and tilting at them, every week imploring his colleagues to do something about climate change.

THOMPSON: The Democrat is from Rhode Island, the Ocean State threatened by rising sea levels.

WHITEHOUSE: I am quite determined to do everything that I can to make sure that the very map of my state is not changed by carbon pollution on my watch.

WHITEHOUSE: It can be a very lonely feeling.

THOMPSON: What would you say to critics who say after two hundred and some speeches all you`ve really done is produce a whole lot of hot air?

WHITEHOUSE: Well, I think you`d have to talk to other people, folks in the scientific community who are feeling very beleaguered and beaten by particularly the Trump administration.

THOMPSON: Married to a marine scientist, Whitehouse is an attorney by trade using both their passions to spur action.

WHITEHOUSE: At the heart of this conflict is a battle between truth and science and power and lies.

THOMPSON: So it`s not about lobsters or polar bears or even beaches? For you, it`s ultimately about the truth?

WHITEHOUSE: It`s about lobsters, polar bears, beaches. It`s about jobs and success in the new emerging green economy. But above all of that I think it`s also about what is our country?

THOMPSON: A weekly reminder for those who will listen–

WHITEHOUSE: I yield the floor.