Joe Biden Is the Real Semi-Fascist 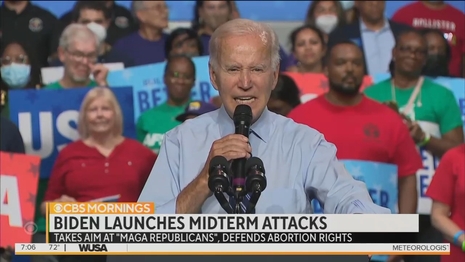 This week, President Joe Biden -- in search of a new label to pin on his political opponents after the failure of his “ultra-MAGA” branding, which prompted peals of laughter rather than shudders of horror -- landed on a new slur with which to tar those who don't support his agenda: they are, he said, semi-fascists. Speaking with a crowd of Democratic donors in Maryland, Biden reportedly said, “What we're seeing now is either the beginning or the death knell of an extreme MAGA philosophy. It's not just Trump, it's the entire philosophy that underpins the -- I'm going to say something -- it's semi-fascism.”

Now, Democratic politicians painting half of Americans as beneath contempt is old hat. Former President Barack Obama, of course, said that Americans who didn't support him in 2008 were merely bitter bigots, clinging to “guns or religion or antipathy toward people who aren't like them.” Hillary Clinton was more pithy: she called them a “basket of deplorables.” So, “semi-fascist” shouldn't come as much of a shock.

But that smear is particularly galling coming from Biden the same week in which he announced, without any constitutional authority whatsoever, that he was erasing some $500 billion in student loan debts -- the single largest executive action in American history. Biden justified that action on the basis of a nonexistent COVID-19 emergency. He has justified similar usurpations on similar grounds: He illegally tasked his Occupational Safety and Health Administration with forcing vaccines on some 80 million people on the basis of a “public health emergency”; he used his Centers for Disease Control and Prevention to try to propagate an eviction moratorium on the same basis; he bragged in July that he will reshape the American economy on his own if Congress doesn't act in order to forestall a supposed “climate change emergency.”

If we're talking about semi-fascism, this stuff qualifies.

The history of fascism, after all, does not begin with a dictator simply marching into a nation's capital and seizing total power. It more frequently begins with the destruction of the legislative branch at the hands of centralization of executive power. Adolf Hitler didn't just declare himself dictator; dictatorial power preceded him in the chancellor's office by several years, dating back to Heinrich Bruning invoking emergency powers under Article 48 of the Weimar Constitution in 1930. Benito Mussolini came to power under constitutional means in 1922 and didn't consolidate his rule until 1925. Fascism, in other words, is a gradual process. And that process starts with executive branch actors accreting authority they were never given.

Because our political discourse has devolved into middle-school histrionics -- “Everyone I don't like is Hitler!” -- we fail to notice the gradual slide into tyranny, ignoring it on behalf of spectacular headlines and reactionary rhetoric. Standing up to that process isn't semi-fascism; it's the opposite.