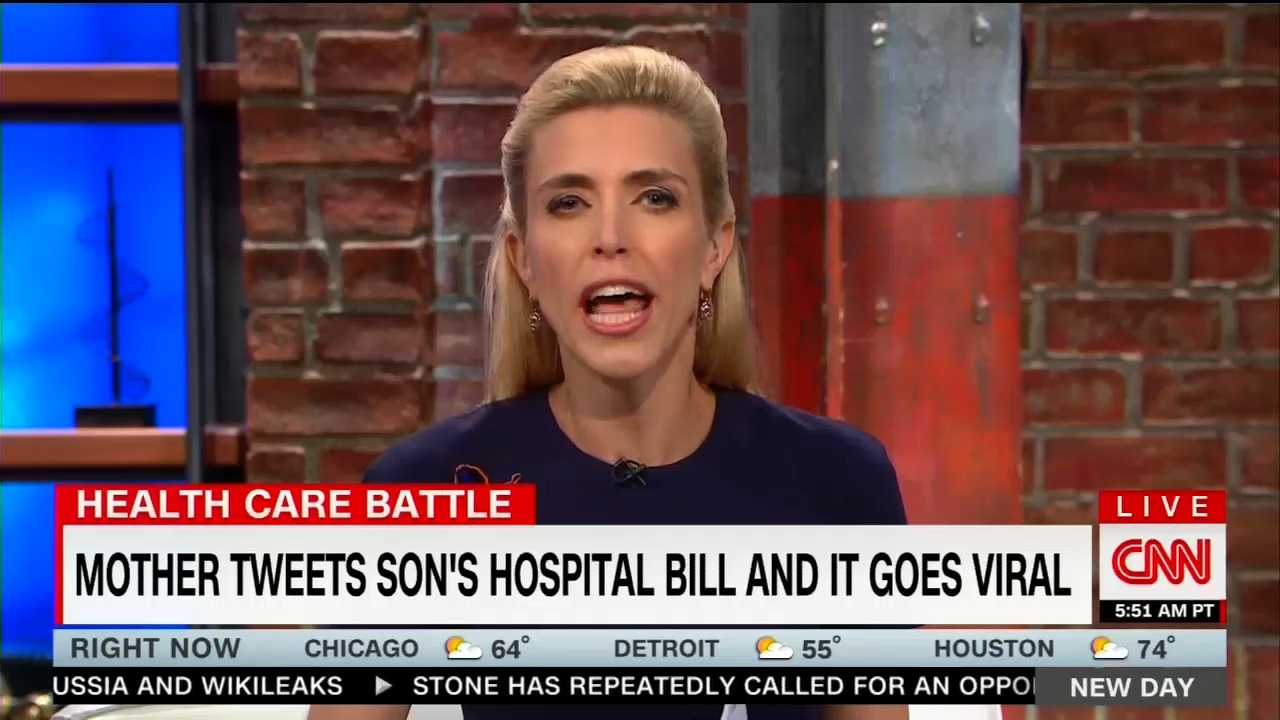 CNN is pulling out all the stops to defend ObamaCare from Republicans meddling. On Wednesday’s New Day, an ObamaCare supporter was brought on to denounce the GOP plan. Take a look at some of the questions reporter Clarissa Ward (filling in for co-host Alisyn Camerota) asked:

So you would potentially fall victim. If the bill passed as is, what would that mean for you?

But does that frustrate you?

Do you feel that that humanity is kind of lacking in the political debate?

I hope everybody is sort of listening to that message because I do think it sometimes gets lost. Let me ask, based on your experience, I'm sure you talked to other parents as well who have been through similar --

Obviously, there are people in difficult health care situations all across the country. If CNN is going to highlight ObamaCare success stories, the network’s journalists have a responsibility to show those harmed by the law.

Find the complete transcript of the interview below:

CLARISSA WARD: While lawmakers on Capitol Hill battle over health care, our next guest is putting a human face on this debate. Alison Chandra's three-year-old son Ethan has a rare genetic disorder. He's already had several open heart surgeries. Alison tweeted the astronomical hospital bill for her son's most recent surgery and it went viral. The surgery was covered under her husband's health care plan. But if they didn't have insurance, that bill would have surpassed $230,000. $230,000. Alison joins me now. And we should note, you were never on Obamacare, right? Is that right?

CHANDRA: Obamacare is a set of regulations that govern insurance plans. So we are protected by Obamacare.

CHANDRA: We were on Medicaid, yes.

WARD: You were on Medicaid.

WARD: So you would potentially fall victim. If the bill passed as is, what would that mean for you?

CHANDRA: Well, this bill -- the reason I wanted to share our story was to bring a part of the conversation that maybe people aren't talking about as much. The fact that this affects not just people who get their insurance through the health care exchanges, what everyone kind of refers to as Obamacare, but it also affects those of us who are covered under employer plans because the ACA is a set of protections. It's a set of regulations. It says that any insurance plan, even an employer one, has to cover certain things, can't stop paying out benefits when they've decided that my kid is too expensive.

WARD: What made you decide to tweet this bill?

CHANDRA: It's so funny because as you're reading that, you're reading lines on a bill, and I'm having memories of specific things that happened with my child. The CAT scan was an emergency because we thought he had had a massive stroke. He was non-responsive. He was needing to have his breathing tube put back in and we literally ran through the halls of the hospital down to the CT machine with him. So it's a line on a bill to you, but it was one of the most terrifying moments of my life to me. And there's no -- the price doesn't matter because this is -- this is -- this is my son's life we're talking about.

WARD: But does that frustrate you?

WARD: Do you feel that that humanity is kind of lacking in the political debate?

CHANDRA: Yes. And -- and, look, I get it. I'm not naive. I understand that there has to be talk of money. There has to be budgets. I get that. But that can't be the only discussion. When you talk numbers, you have to realize that every single statistic is a human life. Does that make sense?

Let me ask, based on your experience, I'm sure you talked to other parents as well who have been through similar --

CHANDRA: Well, OK, so this -- this was interesting. I -- when I first tweeted this, I basically thought I was kind of screaming to an empty room. I thought maybe my granny, my 87-year-old granny, and maybe 100 other people would hear it. But it turned out that it wasn't just granny that was listening, it was the entire country. And my messages have been flooded with other stories of other parents. So I started out trying to just tell our story and really only wanting to tell our story. But now I feel like I've been given a chance to have a voice for people who haven't been able to speak out for feel like they're heard. And every single family that messages me says the same thing, you're fighting for my kid, too. Keep fighting. And so I don't have any other choice. That's all I know -- that's all I know how to do.

CHANDRA: I would want to ask him to look my kid in the eyes, to realize that when he puts pen to paper to sign a law, that he is signing something that's going to have a real effect on real people on real families all across the country. If he wants to be a president for our people in this country, then he needs to start listening to our voices.

CUOMO: Hey, such an important conversation. Thank you, mom, for bringing it here with that beautiful picture of your little boy...