CNN New Day was up to their usual antics Wednesday morning as they brought on two leftists to discuss the GOP’s “monstrosity” of a health care bill. Ezra Klein, Editor-in-Chief of the far-left publication Vox, and Andy Slavitt, former Acting Administrator of the Centers for Medicare and Medicaid Services under President Obama, were chosen to analyze the GOP’s potential bill.

Klein has lobbied for a socialist style system and recently said, “So long as Donald Trump is President, the actions of the U.S. government and the men and the women who work for it cannot be trusted.” He started things off by saying the bill will take money from the poor and give it to the rich: “It takes hundreds of billions of dollars currently being spent to give health insurance to poor people and moves to give tax cuts to rich people.”

When Klein labeled Republican concern for the lack of openness in the drafting process phony, co-host Chris Cuomo nodded in agreement.

Slavitt then predicted that the GOP bill will be a “Frankenstein monster.” Because the Democrat’s 2,500-page bill was, of course, a cute bunny of a bill. He also fearmongered that, “It’s going to end Medicaid as we know it.” Maybe he hasn’t heard, but Medicaid is not exactly in great shape at the moment.

Cuomo teed up his next question for Klein by claiming that Republicans do not care about the poor:

So, Ezra, let’s go to the main proposition of those who are in favor of this. You have two big prongs, right? Or add to it, correct this premise. One is government should get out of it, it’s too expensive. Two is, they say that this is going to bring down my premiums in the individual market, so that's good for me. Let the poor people figure it out a different way.

Cuomo concluded the interview by jabbing Republicans and proclaiming the necessity of having liberals on the show to join him in trashing the GOP:

Which is, of course, a window into why it is all being done so secretly. But that's why we need gentlemen like you, put some light on the situation and then when the vote happens, then comes the heat. Thank you very much. Appreciate it...

New Skin, Reelz Channel, and Kerasal sponsored the get-together with ads running immediately before the segment.

See the more complete transcript of the coordinated smear below: 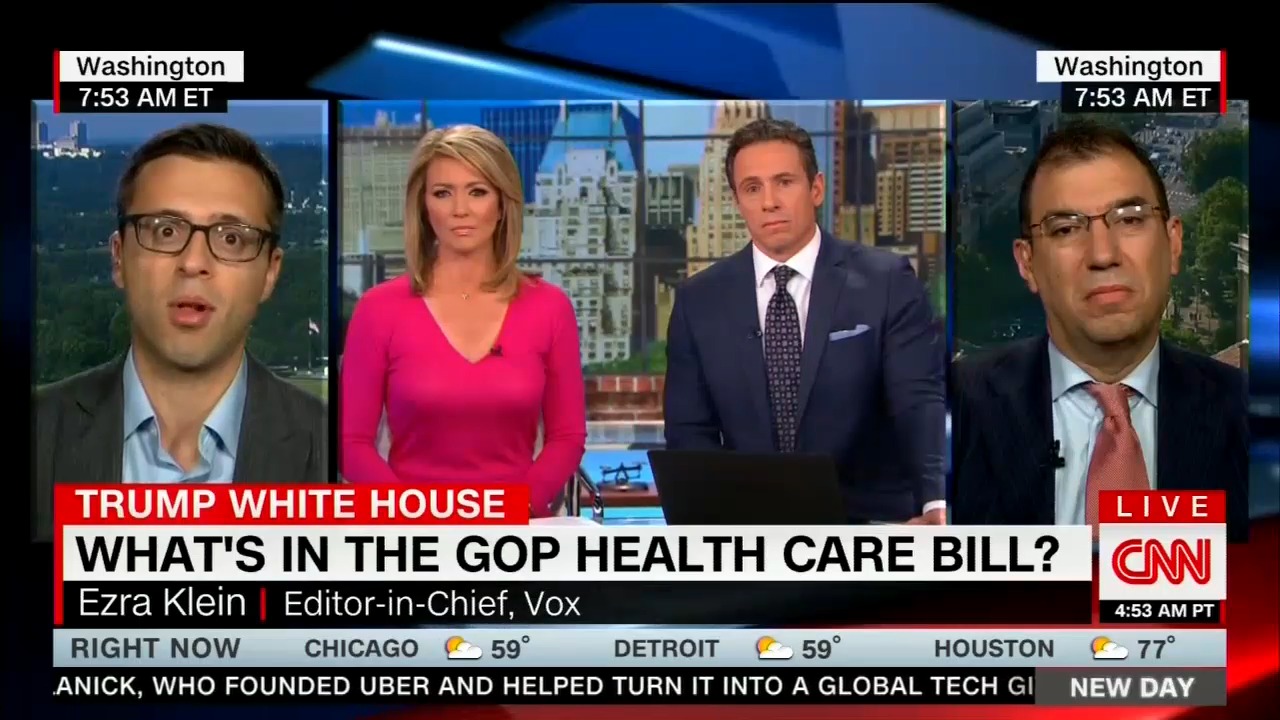 EZRA KLEIN: Democrats had the belief, even when the Affordable Care Act was polling poorly, that if people just knew what was in it, it would be popular. If you remember, President Obama invited Republicans and Democrats to the Blair house late in the process when the bill was in danger. For hour after hour after hour, we covered this of televised debate with a theory being that if the American people just heard what was in the bill, they would like it, that the Democrats would win that debate. The Republicans believed, correctly, the exact opposite. The core of what their bill does in both the House form and from what we can tell in the Senate form, is it takes hundreds of billions of dollars currently being spent to give health insurance to poor people and moves to give tax cuts to rich people. That is not a fundamentally popular proposition and so a more open debate in which people know more about it and hear more about the coverage losses and hear more about the places in which they’re not going to get coverage if they have pre-existing conditions and so on and so forth, does not seem like a good move to Mitch McConnell. But the one final point I want to make on this, when you see Senator McCain make jokes like this, there are a lot of Republicans right now in the Senate saying, “oh, it’s a terrible process, I don’t support it, I share your frustration.” Three Republicans, three, can say we're not going to vote for this bill if we don’t have a open process, then the bill would fail without an open process. So until they actually put their money where their mouth is–

KLEIN: I don't take these jokes as worth very much.

BROOKE BALDWIN: I guess, Andy just listening in to Ezra, how can this iteration of the Senate bill survive if they're doing this all so secretly, if it's something thus far they haven't been able to be very public about talk and defend? How would you respond to what he just, you know, laid out and do we even know anything about this bill?

ANDY SLAVITT: Well, Alisyn, I spent a better part of the day with the Senate yesterday. And near as I could tell, the best way I could describe it is we're going to get something like a Frankenstein monster of health care. This is going to be something very few could love. It’s going to end Medicaid as we know it, the question is only how quickly. In order to get a better score out of the CBO, they're going to try to make the tax credits look more like ObamaCare tax credits, only without any money to do it. So it will be sort of a cheap version of ObamaCare. I think Senator Paul had it close to right yesterday when he said every Democrat in the nation is going to hate it and more than half the Republicans are going to hate it. Uh, because it’s really just a monstrosity that the leaders putting together to try to figure out how to get people to like it. Very hard.

CUOMO: So, Ezra, let’s go to the main proposition of those who are in favor of this. You have two big prongs, right? Or add to it, correct this premise. One is government should get out of it, it’s too expensive. Two is, they say that this is going to bring down my premiums in the individual market, so that's good for me. Let the poor people figure it out a different way.

KLEIN: So, yeah, I agree with you that those are probably the two main prongs. And the second one is the most interesting. There is a reason there are few people philosophically do no the want government involved in health care for poor people and polling it’s not high. You actually find very few elected Republicans will defend that proposition. Some believe it, I’m not saying it doesn’t exist, but it’s not a big part of support here. But the argument for a Republican repeal and replace plan if you listen to Republicans has been four pronged. It will bring down premiums, that deductibles in ObamaCare are too high and deductibles need to be brought down. The Co-pays in ObamaCare are too high and co-pays need to be brought down and that too few people are covered. And that is an excellent set of criticisms of the Affordable Care Act. I agree with every single one of them and the problem is nothing in these Republican bills will fulfill a single one. So yes, it is true that if you are one of the very few people left in the individual market after the sick people have been driven out and the older people have been driven out, and the poor people have been driven out, it is possible, possible, not even certain by the way, it is possible that you will be able to find a plan that covers less than your ObamaCare plan did, that also has a lower premium. But that isn't what people mean when they say they want lower premiums and we saw this in ObamaCare. People actually understand what they want in health insurance and what they want is insurance that covers them, that covers their loved ones and that has a reasonable cost and if they can't pay the cost the government gives them a bit of a hand so they are protected in the event of a medical emergency. You can't trick people about this. This isn't one of the things in politics that ultimately can get by with good press releases and messaging documents. Ultimately people buy health care, they can either afford it or they can’t and it covers them or it doesn't. And they know who to blame.

BALDWIN: So what do we think, Andy, and this is Brooke by the way, Alisyn is off. We’re letting her sleep in because it’s her birthday. Um, What do you think when you hear the president says he wants something with more heart?

SLAVITT: Yes. Well, the problem with, is if you want more heart you need to more piggy bank and they don't have more piggy bank. So I think what the president's trying to do is he's trying to get the American public not to compare the bill to the way people live today and to people's reality today. He is trying to move the ball and compare the Senate bill to the House bill. And his hope is that he can make some improvements to make it look a little bit better and that people will say, “oh, that's a victory.” Unfortunately, though, all they can really afford is window dressing. So maybe they can afford to make the look of pre-existing conditions look a little bit differently. Say that you have to cover people with pre-existing conditions, but at the same time not cover their actual conditions. So there will be some window dressing, I think in order to move the needle, but unless they are willing to cut back massive tax cuts that you spoke about and that Ezra referred to, there’s no possible way that this heart is going to have any substance to it.

CUOMO: Which is of course a window into why it is all being done so secretly. But that's why we need gentlemen like you, put some light on the situation and then when the vote happens, then comes the heat. Thank you very much. Appreciate it.