Dowd began his diatribe by nothing that "today is the 58th anniversary of Martin Luther King's Letter from Birmingham Jail. That's the anniversary today of the letter he penned and one of the things he was injustice anywhere, injustice any place is injustice everyplace. And one of the other things that's not often quoted that he said, which goes I think to the point of why we are not getting anything done, which he said using immoral means to obtain moral ends is wrong, but as wrong or even more wrong is using moral means to preserve immoral ends."

Dowd then turned his attention to the Senate filibuster and brazenly admitted that the filibuster is now bad because Republicans may threaten to filibuster liberal legislation, "What's happening today, the use of and I would have to say again, it’s the GOP, I am not going to cast on any blame on all, it’s the GOP who continues to use a tradition of a filibuster or the tradition of the way things have acted in order to preserve an immoral end."

For Dowd Republicans aren't seeking to protect the Bill of Rights, but rather, "The immoral end is the allowance of continued gun violence in the country."

To prove his point Dowd claimed that 70-80 percent of people agree with him and that he owns five rifles although he declined to mention whether any of those rifles are among the types that liberals are commonly trying to ban. 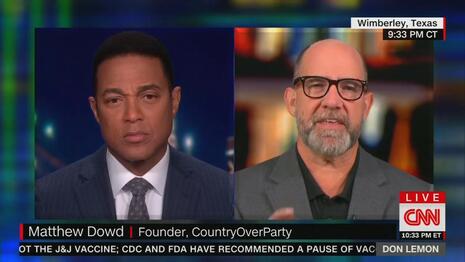 Instead, he burned a strawman when he declared, "a small minority party of the Republican Party which dominates them continue to press forward on this fiction that the Second Amendment preserves all rights to own all weapons at all times in any manner that you want."

For Dowd, the lack of gun control measures, or "common-sense gun reform," constitute "a primary example of a broken democracy. The only way out of it, Don, as Martin Luther King wrote is for all of us to understand that we share this, we are in a single garment of destiny, you know, an interconnection of mutuality that he wrote about."

Speaking of "voter suppression" and "what the country wants," despite all the Jim Crow 2.0 attacks, voter ID is supported by 75% of voters, including 69% of black voters. Liberals think that majority is dead wrong.

This segment was sponsored by Nutrisystem.