Now that the dust has settled a little bit from the Supreme Court’s decision to overturn Roe v. Wade, it’s time for Jennifer Rubin to come out of the woodwork to pen a truly egregious opinion piece for The Washington Post.

Titled "The Supreme Court eviscerates abortion rights and its own legitimacy," Rubin mainly summarized the dissenting opinion given by the court’s liberal minority, dramatically proclaiming, “The court’s decision is so emphatic, and so contemptuous of the principle of stare decisis, that one wonders whether the unvarnished radicalism of the decision will finally rouse millions of Americans to the threat posed by a court untethered to law, precedent or reason.”

Stare decisis has been appealed to multiple times in the first few hours of reaction in defense of Roe, so a definition is probably in order. According to Cornell Law School, “When a court faces a legal argument, if a previous court has ruled on the same or a closely related issue, then the court will make their decision in alignment with the previous court’s decision. The previous deciding-court must have binding authority over the court; otherwise, the previous decision is merely persuasive authority.” Simply stating that the court has ruled twice before in favor of abortion does not force the Supreme Court to uphold it, as some seem to believe.

Rubin notes, “The dissent also underscores the enormous damage to women’s self-determination, autonomy and equal status as persons. And it rightly attacks the garbled history in the majority opinion, noting that the Constitution was ratified before women had the vote. In essence, the court elevates male dominance to a constitutional imperative in the 21st century.”

This is a silly argument. The 14th Amendment states, “No State shall make or enforce any law which shall abridge the privileges or immunities of citizens of the United States; nor shall any State deprive any person of life, liberty, or property, without due process of law; nor deny to any person within its jurisdiction the equal protection of the laws.” The vote is a right that has been extended steadily since our nation’s founding, while the “right” to abortion not only has no legal precedent prior to Roe but is a clear deprivation of a child’s life.

Rubin makes much ado about the dissenting opinion’s questioning of Kavanaugh’s neutrality, asking “would he say that the Court is being ‘scrupulously neutral’ if it allowed New York and California to ban all the guns they want?”

Unlike abortion, the right to keep and bear arms is explicitly enumerated in the Second Amendment.

However, Rubin’s craziest claim is that the Supreme Court wants to institute a Handmaid’s Tale-style confessional ethnostate, “The hypocrisy and intellectual dishonesty of the court’s right-wing justices lead to the conclusion that they have simply appointed themselves super-legislators free to impose a view of the United States as a White, Christian and male-dominated society despite the values, beliefs and choices of a majority of 330 million modern Americans.”

But Rubin’s screed is tame compared to her unhinged Tweet the hour after the opinion dropped: 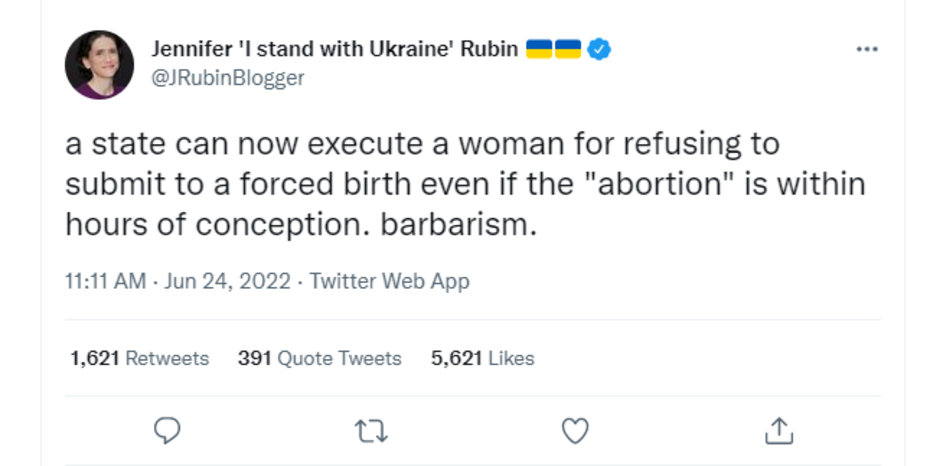 On Friday night, Fox News host Jesse Watters aired the tweet and the screen said now they were making things up. Watters said "I don't even know what that means. I'm pretty sure that the U.S. Supreme court didn't legalize the right for doctors to murder pregnant women. Or birthing people."

This is a complete 180 from Rubin's earlier position in 2012 (when she was a big Mitt Romney fan). Then she said elective abortions had nothing to do with women's health. 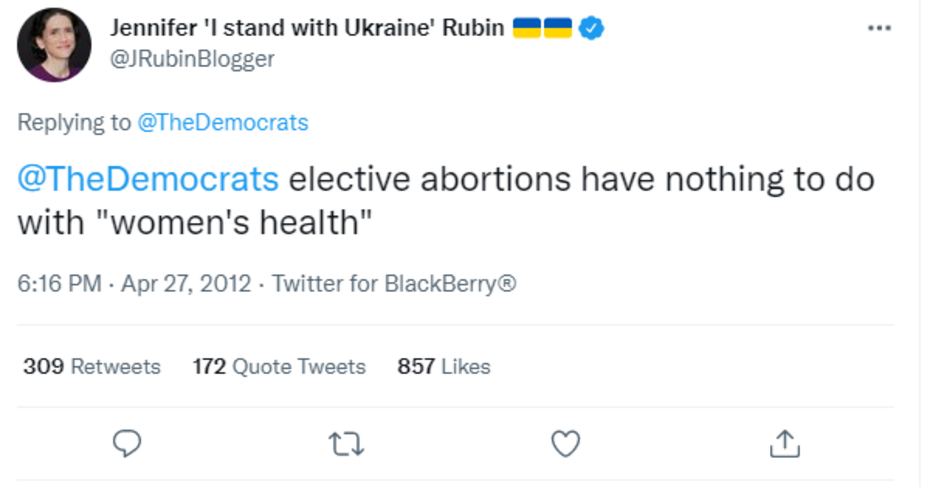 One has to wonder how much more fuel on the fire articles and Tweets like these will pour on the “Night of Rage” planned for tonight.