Nineteen leading pro-life organizations joined the Media Research Center to chastise the networks for their near blackout of the 2015 March for Life. The Annual March for Life, which attracted over 200,000 participants from around the country, marked the 42nd anniversary of Roe v. Wade, the Supreme Court decision that legalized abortion. [related item "200,000 March for Life -- Networks Give Them 15 Seconds"]

The only network that offered coverage was CBS, which dedicated 15 seconds to the March in the context of highlighting moderate Republican opposition to the Pain-Capable Unborn Child Protection Act. Meanwhile, NBC , ABC, and Spanish-language networks Univision and Telemundo, completely ignored the March. The networks did, however, find time to cover "DeflateGate," sidecar dogs in America, and Prince Andrew’s sex scandal. Media Research Center founder and president Brent Bozell reacts:

If these were a few dozen hipsters protesting corporate profits while taking selfies with iPhones, the networks would have wall-to-wall coverage. The media cannot be bothered to cover 200,000 pro-lifers who came to Washington in the middle of winter to march for the unborn.

It’s shameful. If you’re throwing Molotov cocktails at police officers, the media will provide sympathetic coverage to your cause. If you’re standing up for the most vulnerable in our society, the media turn a deaf ear. With each passing day, the media continue to hemorrhage their credibility. 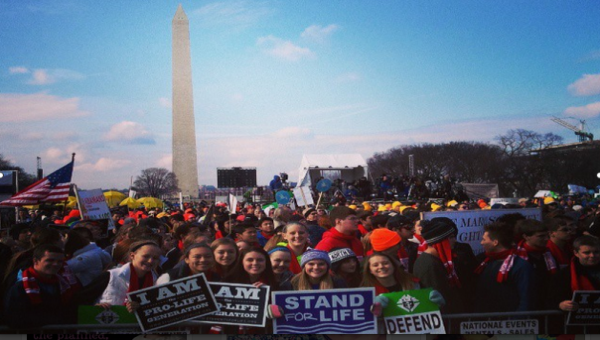 The statements of various pro-life movement leaders are included below:

"If 200,000 people showed up in Washington to protest in favor of almost any other cause, it would be considered national news by nearly every newspaper or network. The decision to ignore America's biggest march yet again shows that U.S. mainstream media, including the Big Three networks, has no interest in reporting on anything that might harm its agenda -- and nothing undercuts that agenda more than hundreds of thousands of mostly young people coming to D.C. to support life."

“The media blackout of this gigantic march shows how proud these journalists are to wear their politics on their sleeve. They do a disservice to the public, which accounts for why they are held in such low regard.”

"Most Americans could be forgiven if they had no idea that 200,000 people took to the streets of the nation's capital every year to mark the anniversary of Roe v. Wade. After all, how would they know? Protests, like Occupy Wall Street, get major news coverage only when they advance the agenda of the mainstream media."

“We don’t March for Life in the hope of media coverage, but it defies logic that the largest, longest-active and still-growing civil rights movement can be overlooked or judged not newsworthy.”

"The intentional refusal to report on nearly half a million people dominated by youth standing for life in our Nation's Capital is irresponsible. While the media turned a blind eye, the tidal wave of life will one day wash away the blood shed of our children."

"The mainstream media has proven, yet again, its main interest is to misinform the public. Every year they gladly cover 'gay pride' parades with misrepresentative imagery while choosing to misrepresent America's pro-life majority by deliberately ignoring that we exist."

“When more than a quarter of a million people come to one city on one day for one cause – how can any real journalist not consider it to be worth covering?  Yet that’s exactly what happened when the 42nd annual March for Life was held in Washington on January 22.  I’ll bet that every other cause or protest-related rally drawing over 100,000 people to the nation’s capital in the last year was covered and covered excessively, while the March for Life was treated as if it never even happened.”

"It’s not surprising when the big media ignore large gatherings in Washington – year after year – of hundreds of thousands of pro-life activists, but it is unprofessional and betrays their absolute bias. As a journalist, senior newspaper executive and media entrepreneur for more than 35 years, I’m genuinely ashamed at what my industry has become. Not only do they avoid debate and discussion of the sanctity of life, they seek to distort the issue by hiding gatherings with the vigor one would expect only in a totalitarian, closed society with a government-controlled media.”

"When a massive group of 200,000 Americans of every ethnic, racial, religious, age and economic status peacefully unite for a cause that speaks to perhaps the most fundamental pillar of our society, it is news.  Trying to pretend otherwise is irrational, irresponsible, and unprofessional."

"The mainstream media either ignores the annual March for Life or they lie about it. They lie about it by not showing the hundreds of thousands of pro-life marchers instead focusing exclusively on a handful of pro-aborts as if that is the story. No matter. We are winning without them. We are winning in spite of them. All the better for when we finally win.”

"The left-wing media’s pro-abortion bias is obvious in its reporting priorities.  Zero mention of the hundreds of thousands of Americans who participated in this year’s March for Life, but plenty of ‘news’ about deflated footballs instead.  Pathetic.”

“The hundreds of thousands that marched peacefully last Tuesday did so to give voice to the voiceless. The network press doesn't report on the March for Life because they are cowards who don't want to risk offending those who already have voices.”

"It is truly inexcusable for the media to ignore the March for Life, one of the nation's largest annual human rights demonstrations.  Despite media censorship, the pro-life movement grows every year, attracting more and more women and young people who understand the fundamental truth that all human beings, irrespective of age or ability, have equal value and ought to be protected in law."

"It amazes me that the media can ignore a half of a million people peacefully raising their voices in protest but act like sharks in a feeding frenzy over the Ferguson and New York protests.  Perhaps if we walked with our arms up and chanted 'hands up, don't abort' or 'I can't breathe,' they would have covered it. Just as black lives matter, all lives matter.  Their silence shows their bias and their fear of showing the world that this is the pro-life generation."

"Americans are continuing to move increasingly pro-life, and the hundreds of thousands of people at this year's March for Life bear witness to that fact.  Though the media ignores the mass crowds year after year, the grassroots continues to have its intended effect, spreading the truth that every life, born or unborn, is precious and priceless."

“The major media networks and papers cannot deal with their narrative being contradicted by the joyful witness of hundreds of thousands. That is why they can’t bring themselves to look at it honestly. If this was a huge annual anti-war rally Anderson Cooper would be doing wall to wall coverage with a desk on the mall. Negating coverage of the annual March for Life – which brings thousands upon thousands to testify to the sanctity of all life – should call all pro-lifers to increased pro-life action.”

“The mainstream media continues to show its extreme bias on issues like marriage and life with their lack of coverage of the 2015 March for Life, which brought hundreds of thousands of protesters to the nation’s capital. Even as network media continue to ignore critical issues of importance to average American families, preferring to highlight meaningless though titillating and trending topics in the culture, they wonder why fewer and fewer Americans turn to them for news and information. They are on a march to irrelevancy.”

"The mainstream media can seemingly crank out endless stories about deflated footballs or large amounts of snow in certain portions of the country. But when well over half a million people come to the nation’s capital to speak out on the human rights issue of our time, they seem inconvenienced in having to report anything – if they report anything at all. With polls showing a majority of Americans oppose abortions, and a majority of young Americans as well, it’s well past time for the media to wake up and acknowledge that."

“Every year, hundreds of thousands of Americans come to Washington in the dead of winter to rally on behalf of the unborn. And every year, the media ignores or downplays the significance of the pro-life movement. The egregious bias proves that cronyism extends beyond simply handing out checks, it extends into our culture. Fortunately, most Americans see through the spin and continue to fight for the most vulnerable among us.”

"The continued media blackout on abortion disregards the primary obligation of journalism: to accurately report, investigate, and tell truth without bias. While mainstream media perpetuate a silence on the March for Life, the unjust killing of 3,000 preborn children in the womb by abortion continues each and every day. We must speak for society's littlest and weakest members, and give voice to those who are the victims of the greatest human rights abuse of our day."

"There is no debate that the March For Life has rallied more people on Washington, D.C. than any other cause or movement in American history.  It's about time that the national media took notice of the hundreds of thousands of brave souls that take on the frigid temperatures in hopes that our leaders will humble themselves, turn back to God and end abortion in our land."

Joe Baker CEO, Save the Storks

Photo above via the March for Life's official Instagram page.