Greta Slams Lawrence O'Donnell: 'He Has a Potato in His Ear' (Or Both Ears!)

MSNBC’s Lawrence O’Donnell is trying to get ratings for his show (which only has a few viewers to begin with) by throwing rocks at Fox News Channel’s Greta Van Susteren for statements she made Sunday on ABC during This Week.

Van Susteren was part of a panel to discuss Jade Helm 15 – a military training exercise taking place in Texas.  There’s been a conspiracy theory, most notably by InfoWars’ Alex Jones, that Jade Helm 15 was actually the beginning stages of initiating martial law in the United States. The conspiracy theory started to spiral and raise suspicion when several politicians began voicing concern.

During the discussion, Van Susteren said such concerns could have been alleviated if leaders would communicate: “The problem is I do fault our leaders, they’re supposed to lead…They could’ve just picked up the phone and they could’ve had this one in the past a long time ago.”

Asked specifically which leaders, she responded, “I’m talking about the Democrats, the Republicans, the governors and the Pentagon, the President and the Hill. Many of these problems we have is because nobody is talking to anybody.”

Lawrence O’Donnell jumped all over that statement, whining that Van Susteren intentionally singled out President Obama as the only individual. At this point, O’Donnell is just splitting hairs.  Watching the video and reading the transcripts, anyone can see that Van Susteren never intentionally singled out Obama, rather, listed him among other leaders – both Democrats and Republicans.

On his seldom watched show, with a viewership slightly higher than his IQ, O’Donnell pounced: 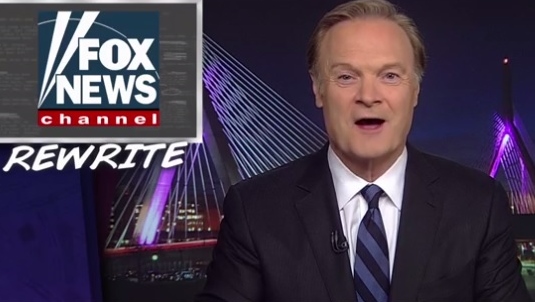 Yes. O’Donnell really said, “each minute of which is invaluable to the governance of the United States and to international relations…” when describing Obama’ “invaluable” time.  (I guess all those vacations, choosing basketball brackets, golf outings, television appearances and silly YouTube videos he’s done count toward those “invaluable minutes.”)  Unreal.

“Did you notice that on this one, in order to blame the President, she had to pretend she was throwing other leaders — all unnamed, all plural,” said O’Donnell. “Not a governor, not the Governor of Texas — just the governors and the Democrats and the Republicans. The President is the only individual who Greta Van Susteren blames for the paranoia and the nonsense we are hearing in Texas today.”

After O’Donnell had his little tantrum on his show, Greta took to her website to be the mature one and end this “spat”:

“Ordinarily I don’t get into spats like this…but since this is now on the internet, I figure I should answer it rather than let the silly stuff linger.  (Plus it is fun to have fun with him like this.)

My conclusion?  MS/NBC Lawrence O’Donnell read a script someone else wrote for him…or he has a potato in his ear (or in both ears)…or  has a wild imagination about me…or he is just being silly. :)  He knows better.  He knows the point I was making – that ALL our leaders don’t speak to each other and also don’t speak adequately to the American people and hence we have things getting way out control…

He knows the absurdity of calling out every name of every person I put in that pool at fault for the lack of communication is this country.  ABC was not about to give me 10 minutes to give the list of all our leaders from coast to coast.

And I know why O’Donnel is taking a silly slap at me and trying to create something that just aint so — it is one of the oldest tricks in cable news.  He knows better.

But (tongue in cheek) if he is somehow confused by who I meant when I said Congress and all the governors, I can help him now.   To get the 400+ names who are in the House, CLICK HERE.  If he needs help identifying the 100 US Senators by name, CLICK HERE.   As for the governors, a good trick is to simply google the name of a state and the word governor…”

With this drummed up quarrel put to rest, only time will tell when O’Donnell will start another one…and who the next target will be.