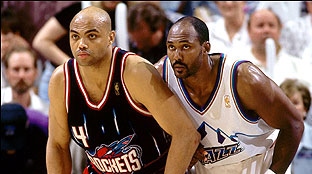 Charles Barkley, Karl Malone, and Kareem Abdul-Jabbar are all basketball legends in their own right, but it’s not what they’ve done on the court that’s earning them headlines these days, it’s what they’ve said off the courts that’s getting all the attention.

Barkley told Sports Ilustrated if he could meet anyone today, it would be Jordan’s King Abdullah II because of his response to ISIS burning alive the captured Jordanian pilot, Muath Al-Kaseasbeh, on video.  He said he wished Obama was like that:

“Because I think his actions when they burned that kid alive, I thought his actions were heroic. He was like, ‘No, you cannot do that to my people.’ I wish President Obama was like that sometimes. I do. I think that is the way we have to treat ISIS…We can’t keep thinking it will go away. I thought it was heroic what Abdullah did.

Given how Republicans have criticized the Obama administration and lack of strategy for fighting ISIS, Barkley said he may be leaning toward voting for a Republican during the next presidential election: “I am paying close attention to the political situation. I have always voted Democratic. But I like some of the Republicans this time around....I like Chris Christie. I like Jeb Bush. I like those guys.”

He added: “But I was very disappointed in Chris Christie the other day on the measles thing. It is a shame that these guys are afraid of just answering the question and trying to make everyone agree with you,” Barkley said. “I don’t understand why you answer a question and think everyone is going to agree with you. You can’t live your life like that.”

When asked his thoughts on Hillary Clinton, Barkley laughed and said, “Well, I just told you I was thinking about voting Republican.”

Truth Revolt reports Karl Malone told HuffPost Live he agreed with Barkley on race relations in the wake of Ferguson and all the protests. Marc Lamont Hill asked Malone his take on Barkley’s call for the African American community to “look in the mirror,” that there’s a reason that police “racially profile us at times,” even if it’s wrong, Malone said he completely agreed:

I echo his sentiments exactly. We need to look in our mirror ourselves,  stop waiting on someone to come march on our behalf, take ownership in ourself, make our community better, and stop looking for a handout. Do something about it yourself that you can control. Stop using that excuse about race. I am sick and tired that every time you turn around, that’s what we dangle. Everybody can dangle it. [...] Race goes both ways—it really goes both ways.

Hill then asked him if he thought race did not play a part in Ferguson, to which Malone said while his heart went out to the family, he thought “everyone was at fault." He then stressed the importance of valuing our first responders and taking personal responsibility:

Let me tell you something, our first responders have a hell of a job to do. They have families as well. But I think this right here: our problem now is that we do so much talking and beating things to death. Let’s take ownership in ourself. What can we do? What can we do as a society, what can we do as African Americans? And stop waiting on someone to come in and march for us. Be your person and own up to what you need to do and handle your business. I have nothing wrong with what Charles said because I believe him as well.

Malone has received a lot of backlash from the left for going against Democrat party lines when it comes to race, with one commenter saying “he wants to be white so bad it’s sickening,” while others have praised him and Barkley for telling it like it is.

Kareem Abdul-Jabbar is more on the Obama line. He appeared Monday on MSNBC’s Morning Joe, drawing a comparison between ISIS representing Islam to that of the Ku Klux Klan as “Christian knights.”  When asked by host Mika Brzezinski on what he thought drove ISIS, he said:

“It’s a play for money and power, and these people try to impose their will on people so people will listen to them, and they can be in charge. That’s all it’s about. They’ve taken on a fascist attitude and a fascist approach to everything. You do what we say or you die….You can make parallels to things that have happened here in America. Like the Ku Klux Klan saying they are the Christian knights. And they do not practice Christianity.”

He also took a page out of Obama’s playbook and used the First Christian Crusade of 1095 to back up his claim: “It’s not an excuse, it’s no excuse and oppressing one group means that we have to look out, all groups have to get together to fight that type of oppression, because we all should be free,” he said.

Abdul-Jabbar’s appearance came on the heels of a piece he wrote for Time magazine about the Charlie Hebdo attacks last month in Paris. He condemned the media for essentially bringing out “celebrity Muslims” on speed-dial to disassociate the barbaric acts of ISIS and their relation to Islam. He claimed it’s never about religion, but about money:

Violence committed in the name of religion is never about religion—it’s ultimately about money. The 1976 movie, All the President’s Men, got it right when it reduced the Daedalus maze of the Watergate scandal to the simple phrase, “Follow the money.” Forget the goons who actually carry out these deadly acts, they are nothing more than automated drones remote-controlled by others.