So apparently there’s a uterus puppet going around the country making videos about abortion clinics and lack thereof.  Yes, there’s a puppet named Eunice, and she’s a sad uterus.

Hans Johnson from JillStanek.com found this great little gem and we just had to share. He wrote:

In the “You Can’t Make This Stuff Up” category comes a video called “The Abortion Desert.” Taking a cue from the idea of “food deserts” - a lack of urban grocery stores – the abortion lobby group Lady Parts Justice nervously brings attention to the dwindling number of abortion clinics.

For a serious subject, it’s an oddly sophomoric presentation (produced by Lizz Winstead, the formerly comedic co-creator of The Daily Show) which features a uterus puppet and a shirtless Chippendales dancer… er, “cowboy.”

They claim to be “a national movement using humor & outrage to remove bodily autonomy-hating local politicians in 2014 & beyond.” Failing at both, they are being bested by many pro-life groups that find nothing funny in this, and balance their outrage with caring for both mother and child (does that make us “Baby Parts Justice”?

The video clip shows Eunice the Uterus making the “hard journey” between the western borders of Idaho to eastern borders of North and South Dakota, trying to find an abortion clinic. (You can count the number of them on two hands.) In the video, Eunice “traces the steps so many have been forced to take because of lack of community access, insurance or means. The journey of Eunice will show just how dangerous restrictive abortion laws are, and remind us that poor rural women and women of color are often forgotten by politicians and always are the ones to suffer the most when access to affordable health care is removed from vulnerable areas."

If you haven’t heard of Lady Parts Justice, you aren’t alone. From their Mission Statement:

Lady Parts Justice is the first not safe for work, rapid response reproductive rights messaging hub that uses comedy, culture and digital media to get people off their asses and reclaim their rights.

And, if you are so inclined, they even have a Retail page where you can buy some really awesome Lady Parts merchandise!

– “You are Not the Boss of V” t-shirt
– Vegan lipstick in the color of blood red called “Justice”
– Uterus charms
– Vibrators
– Handmade Eunice the Uterus Ornament
– “Stylish” tote, a "V-tastic bag"

Just in time for the holidays! 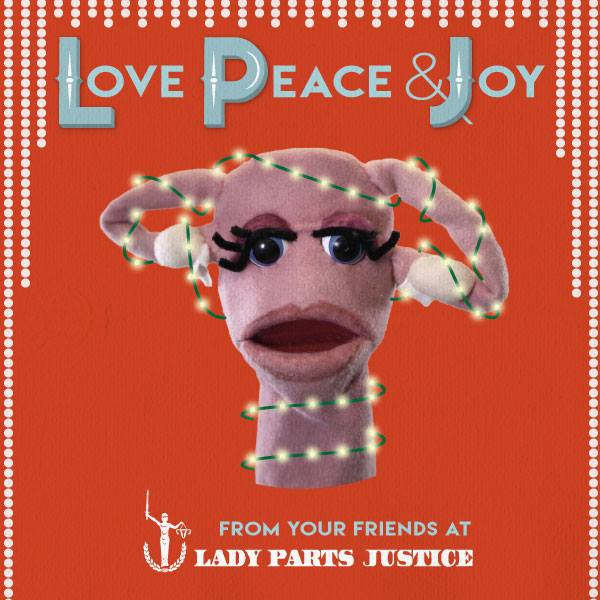