Bill Maher: My 'Soulmate' Gruber Is Right About American Public's Stupidity, They're Like Dogs 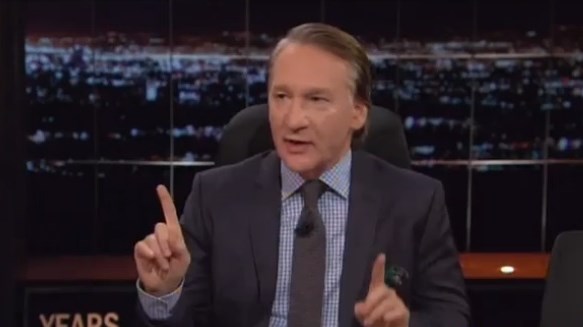 On Friday, Bill Maher, host of HBO’s Real Time brought up Jonathan Gruber, the economist who was an advisor and main architect on Obamacare and got caught crediting the “stupidity” of Americans to get the bill passed. Maher joked they were “soulmates” and likened his fellow Americans to dogs, and didn’t understand why anything Gruber said about the average American's stupidity was considered controversial.

MAHER: I'm bringing this up because this guy, Jonathan Gruber, he's an M.I.T. professor who worked on the Obama health care plan. Big controversy because they found a tape of him basically saying that the American people are stupid because he -- a lot of tapes -- because what he was saying to get the bill passed we had to do a lot of sleight of hand or else they would not have voted for it. If we called it a "tax" -- even though it was a tax -- you have to basically slip a pill in the dog's food in a piece of ham to get the dog to eat the pill. I agree, and I've heard nobody else in America say that. Everybody on the left and the right: "Oh, how could he call American's stupid?

Jonathan Gruber, you have met your soulmate. How is this even controversial, I have no idea.

Maher's audience applauded wildly, as they always do for their hero. Why did Maher agree with Gruber?  This is why:

"Can you blame [Americans] for not knowing the three branches of government? For checking out on that one? Because that one happened a lot before health care came down the pike... They're stupid."

Ironically, Maher is calling (most of) his audience and those who vote along similar party lines with the provocative HBO host those demeaning names. Chris Matthews was right there with Maher in agreement:

"He said that we're going to take money from people who can afford insurance, who are healthy and young and don't have expensive illnesses and give it to people who are sick and older. Everybody knew that. Where else was it going to come from?"

Both hosts used statistics about American knowledge of civics to convey that Americans like the sound of the Affordable Care Act but hate Obamacare, and they support the provisions in Obamacare. Matthews also pointed out that most Americans don't know how much the US spends on foreign aid.

Ironically, the only panelist that defended the American public wasn’t even American.  It was was Canadian MP Chrystia Freeland after praising the intelligence of her constituents, getting through a line of questioning from Matthews on her pronunciation of "about," and saying that media and politicians deserve blame for Americans checking out of politics.

Maher concluded the discussion by pointing to Reps. Louie Gohmert (R-TX) and Michele Bachmann (R-MN) as examples of the idiocy of American voters.