British comedian and actor Russell Brand is worth roughly $20 million and he’s also never voted. But that didn’t stop far-left Democracy Now! from seeking out his views on politics and income inequality.

Brand appeared on Democracy Now! Nov. 14, 2014, where he railed against the current U.S. and U.K. political systems and about income inequality as well as praised left-wing academic Noam Chomsky. He also promoted his new book, “Revolution.” 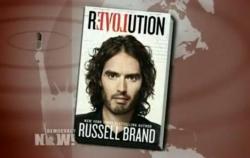 Host Amy Goodman lauded Brand who she claimed had “emerged as one of the most prominent voices of the British left.” She also proudly disclosed his work with the Occupy movement and noted that he marched with the “hacker collective Anonymous.”

Brand, known for movies including “Forgetting Sarah Marshall” and “Get Him to the Greek,” told Goodman that the current political system in “America and Great Britain are not run for ordinary people; it’s run for corporations.” Although Brand again admitted that he has not ever voted, he promoted a more directly democratic form of government.

Brand said of the government, “It’s almost like they’re anticipating further public unrest, and instead of placating members of the population through fairness, redistribution of wealth, not beating them up and shooting them, they’ve decided to just arm the police."

He added that situations like Ferguson would continue to happen around the world, “as this growing disparity between rich and poor, this gulf of inequality, continues.”

Celebrity Net Worth said the actor and comedian has had a very profitable career, making him worth $20 million. Yet, in a 2013 interview with Neil Cavuto on Fox Business, Brand denounced profit as “filthy” and said he is in favor of, “a socialist egalitarian system based on the massive redistribution of wealth, heavy taxation of corporations and massive responsibility for energy companies any company exploiting the environment. I think they should be taxed – I think the very concept of profit should be hugely reduced.”

Brand also found other willing cheerleaders in the media to help him promote “Revolution.” NBC’s Matt Lauer described the book as “big thoughts on big issues,” ranging “from drug laws and voting to the redistribution of the wealth around the world” on the “Today Show” Oct. 13. Co-host Tamron Hall also gave approval, saying the book was “funny and, as always, thought-provoking.”

Brand has long made strange and controversial statements. He once said he was “open” to the conspiracy theory that the US government was behind the 9/11 terrorist attacks in an interview with The Guardian. He was also threatened with arrest outside the headquarters of Fox News in New York, where he said “Bill O'Reilly is helping us be more Islamophobic. You might not feel that Islamophobic today. You might think, ‘aw, people who are Muslim are the same as us, they just a different religious perspective. Bill will help you to find some hatred in your heart for people just like you."