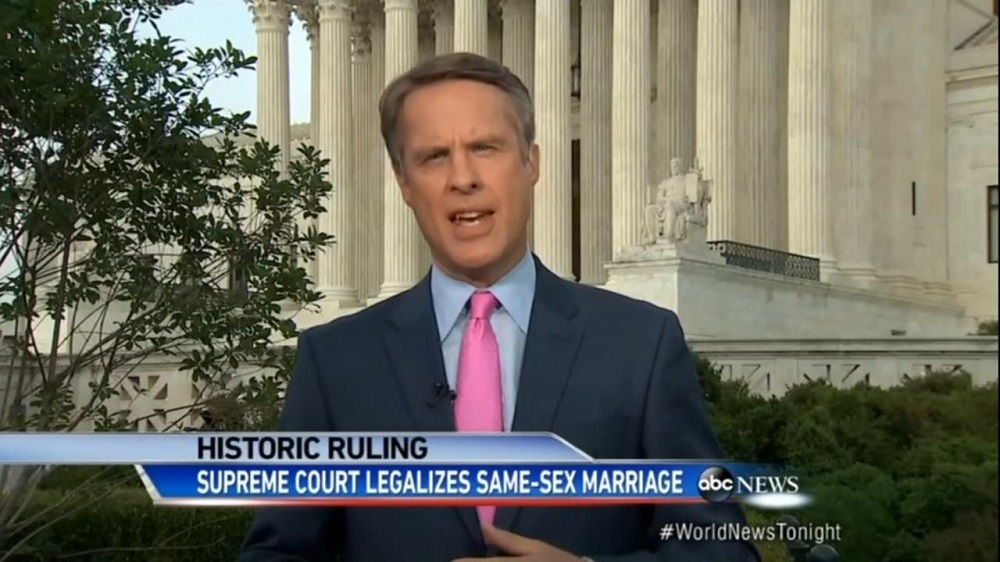 On Friday, ABC's World News Tonight aired a completely one-sided report on the Supreme Court's ruling that legalized same-sex "marriage" in all 50 states. Terry Moran hyped how Justice Anthony Kennedy "wrote today's landmark opinion describing the stakes in this case in the loftiest terms." Moran failed to include any soundbites from social conservative opponents of the decision, and hyped how "Justice Scalia, in a rage, scorning Kennedy's poetic opinion as little more than a 'fortune cookie.'" [video below]

Scott Pelley included one clip from Alabama's governor as an afterthought on CBS Evening News, after his newscast featured five talking heads in favor of the Court's ruling. By contrast, NBC Nightly News stood out for playing three clips of conservatives reacting to the development.

ABC anchor David Muir teased Moran's report by trumpeting the "history at the Supreme Court on same-sex marriage: tonight, the reaction on both sides coming in...the five-four ruling – justices who are against this – you will hear their fiery dissent." But the promised "reaction" from both sides didn't show up during the segment. Moran simply read two excerpts from Chief Justice John Roberts and from Scalia's supposed "rage." He also mentioned near the end of the segment (which followed in the footsteps of his reporting from earlier in the day) that "there are a few states where officials are very reluctant to go forward. They want to wait for an order from this court; and then, an order from a lower court. But you can't say no to the Constitution, at the end of the day. And this is now constitutional law in America."

Spanish-language network Telemundo's evening newscast put Moran to shame by including a clip from Norma Montenegro, a spokeswoman for the United States Conference of Catholic Bishops. Montenego underlined that "for thousands of years, the truth that marriage is the permanent union of a man and a woman has been declared, and precisely for that reason, this decision is a tragic error that damages the common good."

On CBS Evening News, Pelley hyped the Court's ruling as "one of the most momentous civil rights decisions in its history." He added that "the dissents were vehement, led by Chief Justice John Roberts." Correspondent Jan Crawford noted that "it was a ruling decades in the making – a hard-fought victory for the right to marry – guaranteed in a landmark decision that emphasized equality for gays and lesbians, and 'the full promise of liberty.'

Crawford then followed Moran's example in pointing out Justice Scalia's "scathing dissent." She also pointed out that "it's Justice Kennedy who's been the decisive voice – affirming gay rights under the Constitution in four separate major opinions over the past 20 years. Those cases will be his legacy, Scott, putting gays and lesbians on equal ground."

SCOTT PELLEY: So June 26, 2015 will be remembered as the day same-sex marriage began to disappear from our national conversation. From now on, it's likely to be known just as 'marriage.'

Carter Evans is following the reaction.

Kate Kendell is with the National Center for Lesbian Rights.

KATE KENDELL, EXECUTIVE DIRECTOR, NATIONAL CENTER FOR LESBIAN RIGHTS (from rally): It's a hell of a day! Today, America walks the talk of equal justice under law.

UNIDENTIFIED MALE JUSTICE OF THE PEACE: Gentlemen, would you please join hands?

UNIDENTIFIED MALE JUSTICE OF THE PEACE: I now pronounce you spouses for life. Congratulations.

EVANS: Same-sex marriage was already legal in California, but it was also a long road to get there – with voters, legislators, and courts going back and forth on the issue for nine years.

EVANS (on-camera): This is now the law of the land.

GAVIN NEWSOM, CALIFORNIA LIEUTENANT GOVERNOR: Yeah, it's incredible. Who would have imagined?

EVANS (voice-over): In New York, hundreds marched in victory through the streets, and there were long lines for marriage licenses in Dallas, Texas. In Ohio, two men finally tied the knot after being together for 20 years.

Matthew Mansell and John Espejo were plaintiffs in one of the cases before the Supreme Court. They're now celebrating their new right.

MATTHEW MANSELL: We shouldn't have to say, 'It's a gay marriage,' or 'it's a regular marriage.' It's just marriage.

EVANS (on-camera): In California, where same-sex marriage has been legal since 2013, gay couples are still feeling a sense of relief today. Scott, they tell me they can now go anywhere in the country, and enjoy the same rights they have here.

The CBS anchor spotlighted how "in Texas, George Harris and Jack Evans became the first to be married in Dallas County. They have been together for 54 years." He concluded his program's coverage of the Court decision with a clip from Alabama Governor Robert Bentley, who lamented the ruling:

SCOTT PELLEY: Now, the ruling does not take effect for three weeks, and three states – Mississippi, Louisiana, and North Dakota – said they won't issue licenses yet. But others complied immediately; and in Texas, George Harris and Jack Evans became the first to be married in Dallas County. They have been together for 54 years.

Still, many in the nation were dismayed by the ruling – including Alabama Governor Robert Bentley.

ROBERT BENTLEY, ALABAMA GOVERNOR: I, like 81 percent of the people of Alabama, believe that marriage is – at least, on the biblical sense – is defined between one man and one woman. We have to go, obviously, by what the courts say, but I certainly can disagree with them – and I do.

PELLEY: But, with today's ruling, Alabama and these 13 additional states will join the rest of the union making same-sex unions the law of the land.

On NBC Nightly News, Lester Holt echoed Pelley in playing up how the Court's ruling "in many ways, reflecting the huge societal shift of the last 20 years – the President saying today there are days like this when that slow, steady effort is rewarded with justice that arrives like a thunderbolt." Correspondents Pete Williams and Hallie Jackson actually included soundbites from traditional marriage advocates during their reports. Williams also never labeled Scalia's dissent. But like their peers at ABC and NBC, their segments tilted in favor of LGBT activists.

The transcripts of Williams and Jackson's reports from Friday's NBC Nightly News:

LESTER HOLT: Now to that historic Supreme Court decision legalizing same-sex marriage across the land – and it's profound. The five to four vote, in many ways, reflecting the huge societal shift of the last 20 years – the President saying today there are days like this when that slow, steady effort is rewarded with justice that arrives like a thunderbolt.

We'll have all the celebrations across the country, and also hear from those left disappointed by the decision. But first, let's get to the Court and our justice correspondent, Pete Williams. Pete, set the scene for us.

PETE WILLIAMS: Lester, good evening. It's the most important gay rights ruling ever, and it's the culmination of decades of legal battles. It comes from a Supreme Court that, just 30 years ago, said gay people could be punished as criminals. 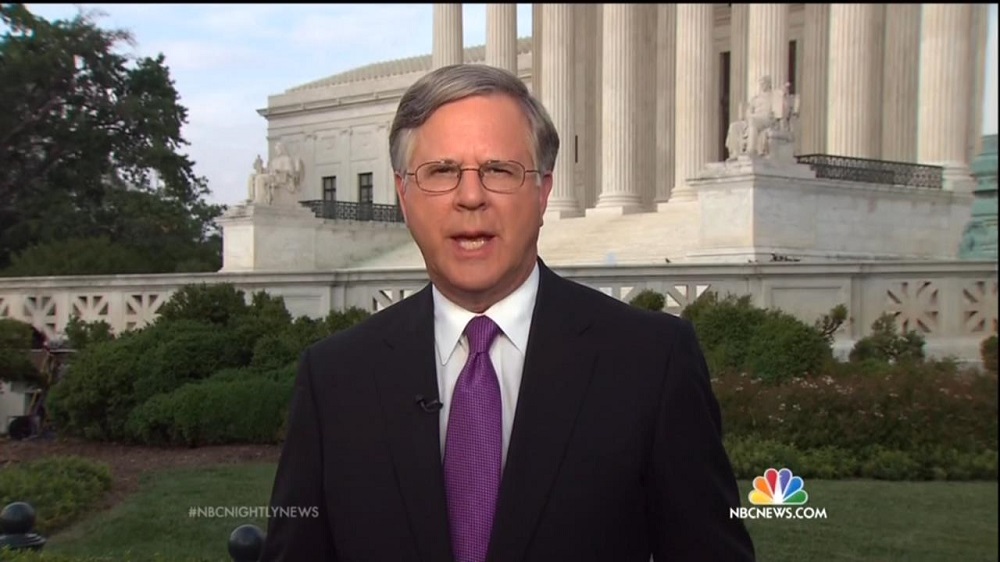 WILLIAMS (voice-over): (clip of crowd cheering outside the Supreme Court) A huge cheer, then singing, as the decision reaches the crowd out front (clip of Gay Men's Chorus of Washington singing "The Star-Spangled Banner") – the historic ruling struck down the bans on same-sex marriage still in effect in 14 states – all of them in the South and the Midwest. It was already legal everywhere else.

Justice Anthony Kennedy wrote the five to four ruling, joined by the Court's liberals: 'The right of same-sex couples to marry is part of the liberty promised by the Constitution,' Kennedy said, which grants them 'equal dignity in the eyes of the law.'

WILLIAMS (on-camera): After the decision was announced, the crowd seemed to grow – people wanting to celebrate and be closer to the Supreme Court.

WILLIAMS (voice-over): Couples who fought the bans in Kentucky were ecstatic.

GREGORY BOURKE, SAME-SEX MARRIAGE PLAINTIFF: It's been a long path for us in our 33 years. We know that people have been fighting this fight for decades.

PAM YORKSMITH: For us, this started out as a dream to add my name to our son's birth certificate.

WILLIAMS: James Obergefell wanted to be declared the survivor on his spouse's death certificate.

JIM OBERGEFELL: I know in my heart that John is with me today.

WILLIAMS: Each of the Supreme Court's four conservatives filed a dissent. Chief Justice John Roberts said the couples made 'strong arguments rooted in social policy and fairness,' but such a decision, he said, 'should rest with the people' – not judges. Justice Antonin Scalia called the Court's reasoning a 'threat to American democracy.' If he had written the ruling, he said, 'I would hide my head in a bag.'

JORDAN LORENCE, GAY MARRIAGE OPPONENT: And we hope that this decision today will not be used as an excuse to ostracize; to demonize; or to punish people for holding views contrary to what five of the nine justices said today.

WILLIAMS: Massachusetts, in 2003, was the first state to permit marriage for gay couples. Others followed slowly – then a rush of court rulings in the past two years brought it to 70 percent of the nation's population.

MARY BONAUTO, SAME-SEX MARRIAGE PLAINTIFFS' ATTORNEY: People don't have to hold their breath as they cross state lines, and worry they're going to lose their marriage and lose their protections as they do.

WILLIAMS (live): Today's ruling settles the issue of same-sex marriage nationwide. It could be undone, but only by a constitutional amendment or by a future Supreme Court that changes its mind – and neither of those seems at all likely. Lester?

Across the country right now, wedding bells are ringing in Texas and Alabama and Georgia – places where some people thought this day might never come. Celebrations are underway tonight, and NBC's Hallie Jackson has all the latest.

HALLIE JACKSON (voice-over): From the Stonewall Inn in New York to San Francisco's city hall, celebrations decades in the making – but perhaps none as meaningful as these: same-sex marriage ceremonies in states where it was illegal before today, like in Arkansas-

UNIDENTIFIED FEMALE JUSTICE OF THE PEACE: Spouses for life- (onlookers cheer and applaud)

JACKSON: And in Texas, where Jack Evans and George Harris finally wed after 50 years together.

UNIDENTIFIED MAN 1: We didn't want to rush into anything. (onlookers laugh) But we're ready.

JACKSON: The paperwork was not quite – with the word 'woman' still printed on the marriage license. (clip of onlookers cheering and applauding)

UNIDENTIFIED MAN 1 : The time has come. Texas has finally caught up with history. Love rules.

JACKSON: Social media lit up, with profile pictures turning to rainbows, and 33,000 Tweets per minute at its peak – Ellen DeGeneres writing simply, 'Love won.' And Tim Cook, Apple's openly gay CEO calling it a 'victory for equality, perseverance, and love.'

UNIDENTIFIED MAN 2: You wouldn't think that something so basic could take so long

JACKSON: Two decades ago, only 27 percent of Americans supported same-sex marriage; now, 60 percent do. But that shift is far less pronounced among Republicans – about six in ten (sic) oppose the Court's decision, according to our latest NBC News/Wall Street Journal poll – with many Christians, especially in conservative parts of the nation, deeply unsettled.

REPRESENTATIVE STEVE KING, (R), IOWA: It's not the will of the people to have same-sex marriage. Now, there's no point in having civil marriage in this country whatsoever.

JACKSON: In Alabama, at least two counties are refusing to issue any marriage licenses – gay or straight.

JACKSON: For opponents of same-sex marriage, a blow from the Supreme Court; for supporters, a victory for equality and love.

JACKSON (on-camera): And in West Hollywood, which was one of the first cities in the country to publicly support marriage equality, thousands of people are expected at a rally tonight, Lester – and for many of them, it's the perfect way to cap Gay Pride Month.

HOLT: All right. Thanks very much.