On Monday, the Washington Post's Express tabloid ran a blatantly anti-Catholic ad on its front page. The full-page advertisement from the far-left "Catholics For Choice" group spoofed the famous World War I-era "I Want You" military recruiting poster, and evoked the worst of 19th century Know-Nothingism. Instead of Uncle Sam, a caricature of a Catholic bishop with a miter on his head points at the viewer, and asks, "We Want You To Help Us Discriminate." (see image below)

The second page of the organization's ad targeted the Catholic bishops of the United States for standing up for religious liberty: "Whether you are Catholic or not: asking you to join a discrimination sounds outrageous. Yet the United States Conference of Catholic Bishops have launched a campaign that we believe promotes just that: discrimination. Though the bishops call it a 'Fortnight for Freedom,' make no mistake: The bishops' idea of religious freedom is the freedom to discriminate against anyone who disagree with them." 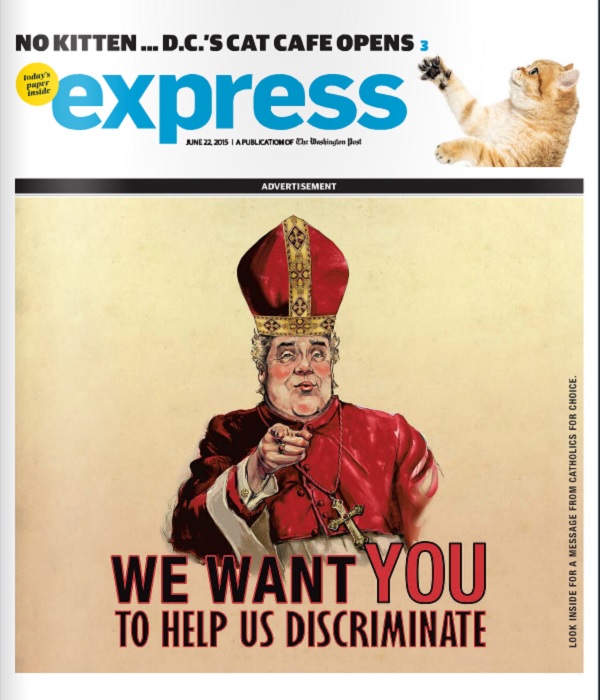 "Catholics For Choice" then listed five sex-related issues that they consider to be "discrimination" – all matters that the Catholic Church teaches to be immoral:

-"Fire a woman who works at a Catholic diocese for using IVF to have a baby"
-"Fire a teacher at a Catholic school for marrying a same-sex partner"
-"Block an employee at a Catholic-affiliated organization from getting birth control through insurance"
-"Use taxpayer dollars to provide services to those living with HIV, but refuse to provide condoms"
-"Take taxpayer dollars to work with victims of sex trafficking without providing emergency contraception or even a referral to another doctor"

The left-wing group added, "We believe that this is discrimination wrapped in a false flag of freedom. Real freedom allows all of us – religious and non-religious to follow our own consciences."

"Catholics For Choice" must not realize their own hypocrisy, as they want to force the Catholic Church and affiliated organizations – such as religious orders, schools and charities – to violate their own consciences to pay for procedures that they consider to be evil.

The organization later claimed that they "represent the majority of Catholics who reject discrimination. We placed this notice because support birth control and reproductive choice, we believe in the rights of LGBT people and we do not support discrimination."

This isn't the first time that the Washington Post's Express paper has run a multi-page advertisement from "Catholics For Choice." Back in July 2012, the anti-Catholic group took a comment from then-Pope Benedict XVI completely out of context to boost the use of condoms and other forms of birth control. They also attacked the "Fortnight for Freedom" campaign that month on the far-left, pro-abortion RH Reality Check website.

"Catholics For Choice" also missed the significance of the date that they chose to publish their bigoted ad. June 22 is the anniversary of King Henry VIII beheading John Fisher, the Bishop of Rochester, just outside the walls of the Tower of London in 1535. Fisher, who was named a cardinal as he waited for his execution, stood by his own conscience, along with the Catholic Church's teachings on the sanctity of marriage, after the King divorced Catherine of Aragon and made himself the head of the Church in England. The bishop, along with the more famous martyr, Thomas More (who was executed days later), are recognized as saints by the Church, and their feast day is June 22.