CNN's Cuomo to Pam Geller: 'You're Throwing A Stone;' 'Overt Provocation' 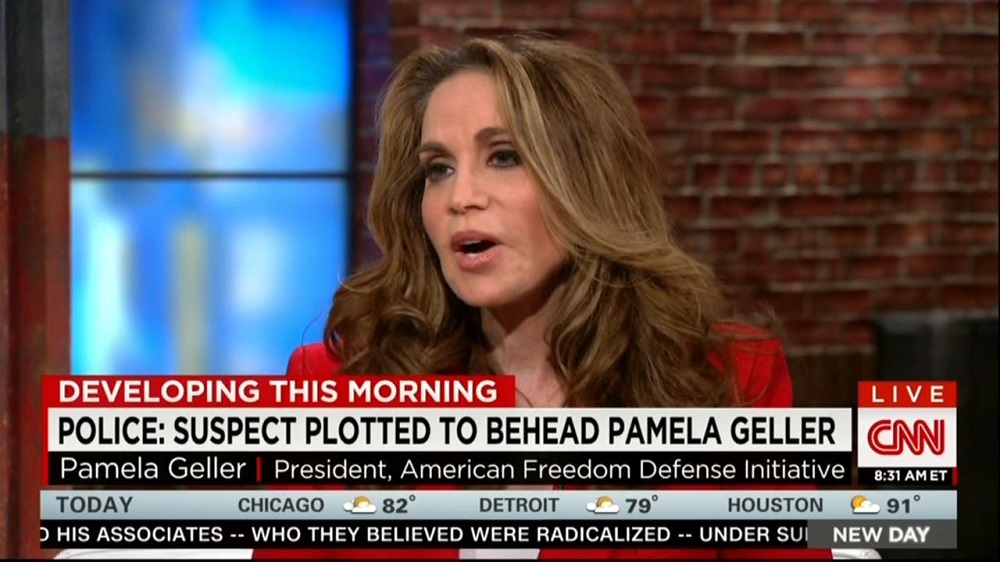 CNN's Chris Cuomo pressed Pam Geller on Thursday's New Day over her leadership of "a group that does take shots at Islam on a regular basis." Cuomo underlined that "you can show the cartoon. People have the equal right to criticize your showing the cartoon as an overt provocation of a religion." He also wondered,  "Why go slight for slight with the Muslims?" The anchor later asserted, "It just seems like you're throwing a stone at something that doesn't really help anything." [video below]

Cuomo led his interview by asking Geller how she was doing, in light of the threats against her life: "How has your life changed now since this – exposure of this, and even before about what you thought you may face?" The guest disclosed that she was "under 24-hour guard now." Geller then went on the offensive against the left's political correctness regarding Islam: "It's interesting: in Muslim countries, under the sharia, there is a death penalty for blaspheming Mohammed. In the West, you're not assassinated, but your character is assassinated. You're defamed, libeled, and ridiculed if you dare criticize Islam. That's where we are right now."

The CNN personality then set up his "overt provocation" label of the blogger's campaigns by asking, "Have you thought that – oh, maybe I went too far; this wasn't worth it; I'm going to change how I do what I do now?" Geller answered by pointing out ISIS's beheading of James Foley as an example that the media is also a target of jihadis, and that trying to not offend them isn't helpful:

GELLER: Drawing a cartoon – an innocuous cartoon – warrants chopping my head off? That's too far? I just don't understand this. They're going to come for you, too, Chris. They're coming for everybody. And the media should be standing with me, particularly in light of [James] Foley – the media should have – should have understood that by kowtowing and submitting to Islamic law, that is what you are doing.

GELLER: By not running the cartoon; by saying that Pamela Geller goes too far in running a cartoon. It's the First Amendment. What happened to 'give me liberty or give me death?' And, you know, we see the-

CUOMO: But you have the liberty. You can show the cartoon. People have the equal right to criticize your showing the cartoon as an overt provocation of a religion.

GELLER: An 'overt provocation' – first of all, we see Jesus blasphemed mercilessly on South Park. We see the cross immersed in a jar of urine. We see mother Mary – you know, immersed in dung. Nobody says anything about that.

CUOMO: That's not true. Those get criticized as well.

GELLER: Nobody gets killed; embassies don't get burned; villages don't get burned. I am asking you – we all don't like our religion mocked. The Roman Catholics don't, the Christians don't, the Mormons don't, and the book – the show 'The Book of Mormon' is viciously anti-Christian. Nobody's getting killed. Why do we condescend to Muslims? Well, I certainly don't. I expect the same behavior. I expect civilized behavior. But it is the low expectation of soft bigotry. Why don't you expect the same thing from Muslims?...

Cuomo then asked his "slight for slight" question. The libertarian guest replied by keeping up her attack on the media's kid glove approach with Islamic issues. The anchor did push back by underlining that his program did show one of the Charlie Hebdo Mohammed cartoons after the massacre at their headquarters in Paris:

CUOMO: Well, you do accept it. You do expect it, rather. You have your laws in place. The question that I think your behavior raises is, why go slight for slight with the Muslims? Why not do what we often teach as a function of virtue – when we're dealing with savagery – which is show that we are better than this? Not show that we can poke them in the eye in a way they don't like it.

GELLER: That's not what you're doing. You are submitting, and you are kowtowing. And they're saying to you, if you draw a little cartoon; if you draw a stick figure and say it's Mohammed, we're going to come and kill you. And so you say, okay, we won't – we won't draw it. CNN won't show it – and like the other major networks-

CUOMO: But here's the thing – first of all....you know that one of my problems with that is that I did show the cartoon after Charlie Hebdo. But I also understand the security concerns of CNN as an organization – and you should as well, because if you hold another event – you knew there was a risk before; not everybody can have 24-hour security. People who come to this event, in their role as their form of patriotism – and they may be exposed to violence because you're dealing with crazy people.

Geller then spotlighted how the majority of media outlets refused to broadcast the Danish cartoons of Mohammed back in 2005, and how that helped the Islamist cause.  Cuomo countered with his "throwing a stone" line:

GELLER: You gave them that power. In the wake of the 9/11 attacks, the Danish cartoons in 2005 – they were very innocuous. Not one American media outlet would run those cartoons. You gave the violent jihadists the power, because if every – because if every-

CUOMO: Because members of the Muslim community, who aren't terrorists, said they found it offensive.

GELLER: If the media – if the media had run those Danish cartoons, none of this would be happening. They couldn't kill everybody. What you did-

CUOMO: But you also make it sound like this is what the war is about – is these cartoons.

GELLER: It's about freedom!

CUOMO: They want – ISIS wants control of territory. They want everyone to live their way. The cartoon is the least of it. It just seems like you're throwing a stone at something that doesn't really help anything.

GELLER: Throwing a stone at something that can get my head chopped off, and it's getting people's heads chopped off all across the world.

CUOMO: But that's why I'm talking to you about it, because it's one thing to say they don't like the cartoon. I'm going to show it – which is exactly what I did after the Charlie Hebdo massacre.

Later in the ten-minute-long segment, the blogger guest wondered, "Where are mainstream Muslims teaching in the mosques against the blasphemy laws; against the Islamic law; against the sharia? What programs are being instituted against the jihadi doctrine?" Cuomo responded with a misleading claim about sharia law:

CUOMO: Sharia is not mainstream Muslim thought, as you know. It's a cultural adaptation-

GELLER: I don't know that at all-

CUOMO: It's about tradition. It's not about the Koran-

GELLR: It's not a cultural adaptation-

CUOMO: Of course, it is-

GELLER: It's Islamic law. This is the law in Muslim lands.

CUOMO: It is – it is the law through tradition. It is not laid out in the Koran-

GELLER: It is laid out under sharia-

CUOMO: In developed societies, they have – you know, you go to Pakistan; you go to places – even in Indonesia, they have parallel systems that – yes, take their tradition into play, but they also believe in justice the way we do here.

Actually, sharia is based, in part, on the Koran, along with the hadith tradition. Geller also played up how traditional sharia law treats other religions, after Cuomo highlighted how she hosted Geert Wilders, a critic of Islam, at the event in Garland, Texas which was targeted by ISIS sympathizers. She continued by returning to her attack on the media:

CUOMO: ...You know, you put your friend there as the keynote speaker who is overtly attacking Islam-

CUOMO: I know, but just because they assert their authority-

GELLER: Let me finish, please – which is why Christians are being slaughtered en masse in Iraq; in Syria. You say the Islamic State – what's the difference between the Islamic State and al Shabaab and al Qaeda and Hamas and Hizbollah?

GELLER: Following pure Islam. You could say no-

CUOMO: We have experts on all the time on Islam who are actually Muslim-

GELLER: Who are your experts? I'd like to know.

GELLER: You have Ibn Warraq on? He's the world's leading-

GELLER: You ever have Robert Spencer on? No, you don't. You have Islamic apologists on.

GELLER: No one is teaching people that. But people need to understand the jihadic doctrine, and that it is coming from you, and mainstream Muslims should be standing with me shoulder to shoulder in defense of free speech; in defense of our freedoms.