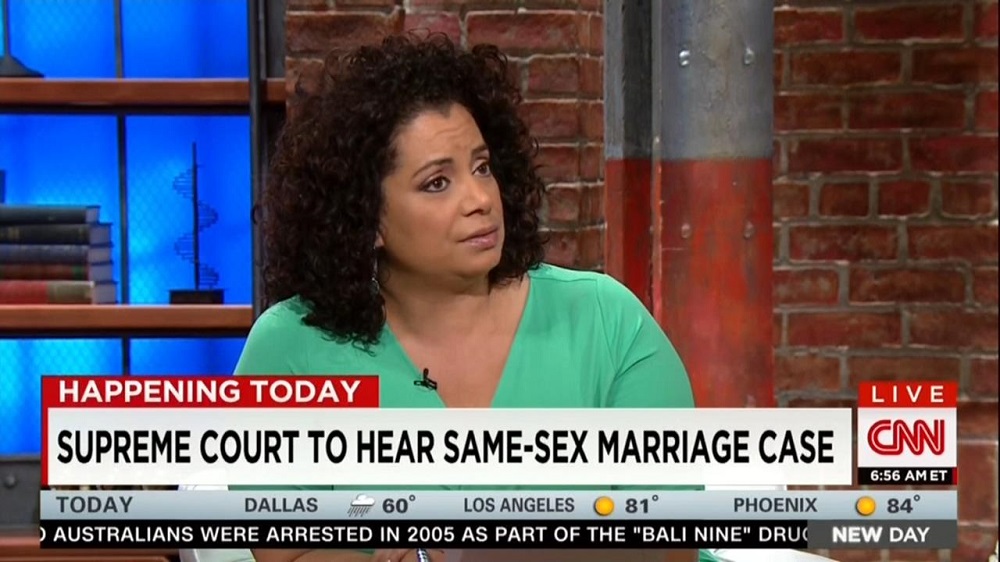 On Tuesday's New Day, CNN's Michaela Pereira broke out the kid-glove treatment for one of the plaintiffs in the same-sex "marriage" cases being heard by the Supreme Court. Pereira touted how Jim Obergefell has "become the poster child" for such partnerships, and gushingly complimented her guest: "And you do it very well, I must add." [video below]

The anchor later played up how she had been "reflecting on the fact that the country's come a long way on this in a very short amount of time – more so than any other social policy. That is something." New Day featured same-sex "marriage" supporters during two full segments, but failed to interview any supporters of the traditional definition of marriage.

Pereira brought on Obergefell, as well as Chad Griffin, the president of the left-wing Human Rights Campaign, for their take on the oral arguments on the cases, which were scheduled at the Court later that morning. The CNN journalist set the softball tone in her first question to the plaintiff, and it became even more clear in her "follow-up:"

MICHAELA PEREIRA: ...I guess I have to ask, right off the bat, Jim: how are you feeling about this big day, as you stand there in front of the courthouse?

JIM OBERGEFELL, PLAINTIFF IN SAME-SEX MARRIAGE CASE: I'm excited, and still hoping that it sinks in that I'm actually here – because it hasn't quite yet happened.

PEREIRA: Chad, maybe you can reach over and pinch him, because I think he's having a 'pinch me' moment- (laughs)

Pereira then turned to Griffin and gave him the same kind of treatment: "Chad, you've actually said that you believe that the Supreme Court will rule in Jim's favor. Why do you feel that confidence?" As the Human Rights Campaign president answered, the CNN anchor seconded one of his statements:

GRIFFIN: I do, Michaela. And, look, it's not only because of Jim and Jim's incredible stories, and all the plaintiffs who've gotten us this far. All of us stand on the shoulders of giants that have built to the day that we're having today. But why I think we're going to win, at the end of the day, is because America is with us. Jim's not alone here-

GRIFFIN: You know, today, more than 60 percent of Americans are supporting Jim and what we're fighting for. A majority of Republicans under 50; most major corporations, including Coca-Cola and General Mills and Apple; are with Jim and with the plaintiffs in their filing before this court. I am confident that, at the end of the day, this court is going to come down, like it has in so many times in past, on the side of equal justice under the law.

Pereira went back to Obergefell and gave him a platform to summarize his plight. As he spoke, CNN ran still photos of the plaintiff and his now-deceased partner (see screen cap below):

PEREIRA: The Human Rights Campaign has been telling your story, Jim, for quite a while. But why don't you tell our viewers, briefly, if you can, why you decided to sue? 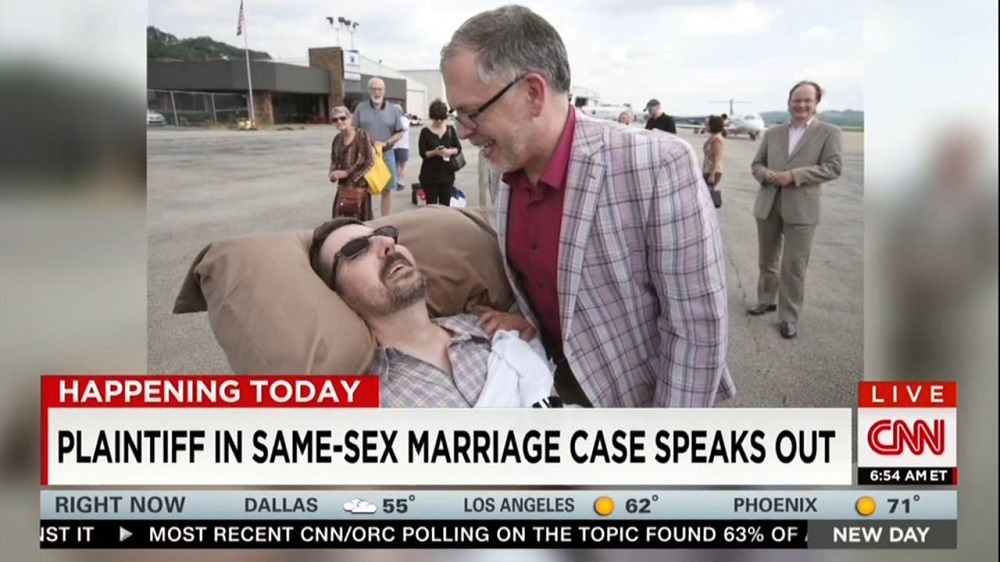 OBERGEFELL: It was a very easy decision, Michaela. When John and I decided to get married, and we had the great fortune to be able to do that and say those incredible words, 'I thee wed' – to come home back to Ohio and to be shown a blank death certificate, and to hear the words that –  you know, John and Jim – when John dies, Ohio will say he's single, and he will – they will not list your name in that field as the surviving spouse. It was heartbreaking. And for us, it was a very easy decision to say, this isn't right; this isn't something we should stand for; and it isn't something anyone else should stand for. So, it was a very easy decision for us to stand up and say, we won't take this.

PEREIRA: You've become the poster child for it. And you do it very well, I must add. (Obergefell laughs)

Later in the segment, the anchor did ask Griffin two questions related to the actual case in front of the Court. However, between the two, she revealed her "reflection" about how "the country's come a long way on this in a very short amount of time – more so than any other social policy:"

PEREIRA: Chad, so the – we know the opponents are going to argue that – and have argued for a long time – that this issue – this issue of gay marriage should be left up to the states. Thirty-six states and Washington, D.C. currently allow for same-sex marriage. But why, for you, is it unacceptable that – the idea of leaving it up to the states to decide?

GRIFFIN: Because at the end of the day, in this country – perhaps, in other countries, Michaela, but not in the United States of America – we don't leave fundamental rights – fundamental civil rights – up to the states. We just don't do that in this country. And this court – those nine justices behind me and this court over time – have said it, in 14 different cases, that marriage is a fundamental right – fundamental, in fact, to the pursuit of happiness. And so, at the end of the day, I believe that's where this court's going to head. And then, loving couples, all across this country – our neighbors, our families – they'll have that same right. They'll all have the same right under the law, and get the same protections that they so deserve.

You know, Justice [Anthony] Kennedy, in his opinion in the Windsor case – he focused on the thousands of children, in this country today, that are being raised by same-sex parents. Don't they deserve the same protections under the law? Of course, they do.

PEREIRA: Jim, I can imagine, on a day like today and leading up to it, you've done a lot of reflecting of where you've come; where you and your former partner had come – the battle, the struggle. And I was even reflecting on the fact that the country's come a long way on this in a very short amount of time – more so than any other social policy. That is something.

OBERGEFELL: It really is. I mean, John and I honestly never thought we would have the ability to marry in our lifetimes; and to see the change in a couple short years has been amazing. And I think a big part of that is, we lived our lives. We were open about who we were, who we are, and our relationship. And that's what has driven all of this change – my LGBT brothers and sisters across the country simply being who they are and being open and honest about that. So, it's amazing that so much has changed, but it's due to that-

PEREIRA: Chad, before we leave you, you'd be okay – how would you react to a split decision? Anything could happen today.

GRIFFIN: Look, anything could happen. But there's one thing that I agree with Justice [Antonin] Scalia on: in his dissent in the Windsor opinion, he said that that opinion was going to lead to other federal courts, all across this country, coming down on the side of marriage equality. Justice Scalia, I think, was right in that dissent. And I believe that some day very soon, Americans in every single corner of this country – in towns big and small, and in all 50 states – are going to have the freedom to marry the person that they love.

Pereira ended the interview as she began it – with more gushing for her two guests: "Chad and Jim, you have a busy day ahead of you. Make sure that you get some Gatorade and some Wheaties in you, all right?"