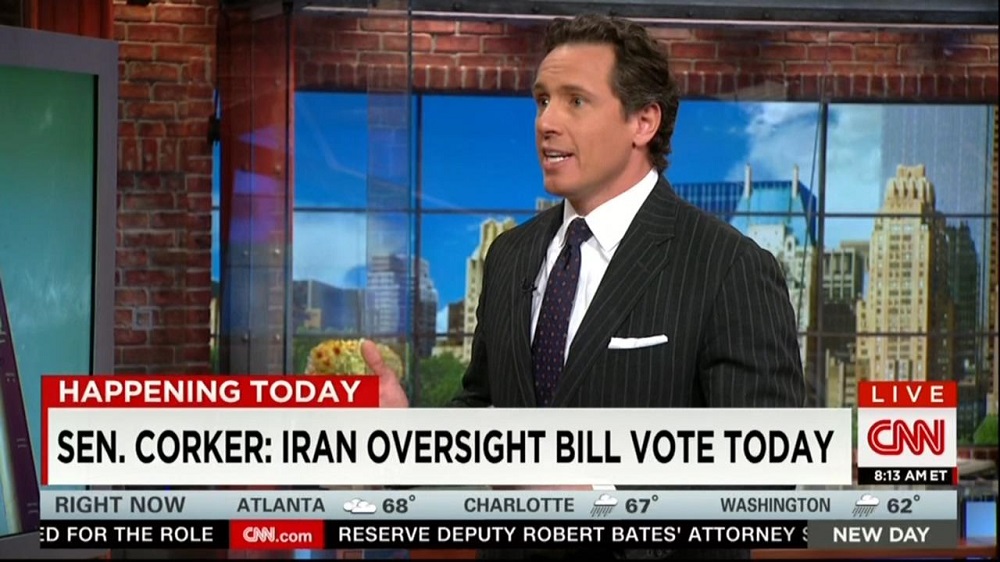 CNN's Chris Cuomo played defense for the Obama administration on Tuesday's New Day as he interviewed Senator Bob Corker on his proposed legislation to "give Congress a say on the Iran deal," as the anchor put it. Cuomo wondered, "How can they negotiate a deal if the Iran side of the table says – well, you really can't give me any assurances, because you have to go to your Congress after this? You know, that's a big...set of handcuffs." [video below]

The anchor later asserted that the Tennessee Republican and his congressional colleagues were "setting up a very difficult standard for the White House to satisfy." He also played up that there's "no other alternative that's coming out of either the Senate or the House" to the proposed framework with Iran.

Cuomo first asked his guest whether a vote on his proposed bill would occur later in the day. Corker replied, in part, that "Congress, through the sanctions four times we put in place since 2010, has brought Iran to the table. So the question today will be, should the President be able to go directly to the U.N. Security Council, and lift those sanctions without congressional input; or should the President have to come to Congress and allow us time to review the details of this, and have the right to weigh in on this?..."

The CNN anchor followed up by beginning his defense of the White House:

CHRIS CUOMO: ...[W]hat about the timing here? If you do this now, don't you feel that you may be compromising the process in lieu of what was Secretary [of State John] Kerry just told you?

Let's play the sound for everybody else.

JOHN KERRY, SECRETARY OF STATE (from press conference): We have two-and-a-half months more to negotiate. That's a serious amount of time with some serious business still to do. So, we hope Congress will listen carefully, and ask the questions that it wants – but also give us the space and the time to be able to complete a very difficult task, which has high stakes for our country.

CUOMO: So why take this tack, instead of working to compromise with the White House while they're doing the negotiating?

CORKER: Yeah. Well, some – I think there may be a misunderstanding about what's happening. What Congress is saying when they finish negotiating. We are not going to be involved while they're negotiating. But when they finish, we want this presented to Congress, and we want it to lay before Congress without the congressional sanctions being lifted. And we want to be able to – to vote to approve or disapprove if we so choose. And so, we – we're not interfering. We're just – what's that?

CUOMO: But how can they do a deal, Senator – how can they negotiate a deal if the Iran side of the table says – well, you really can't give me any assurances, because you have to go to your Congress after this? You know, that – that's a big hand – set of handcuffs.

CORKER: No. Look, on any agreement that's reached, whether it's the START treaty – the INF treaty with Russia – in every case, Congress gets involved in those, actually, in a much bigger way at a much higher level. So this sets in place-

CUOMO: In treaties – in treaties. But, as you know, the overwhelming majority – number of agreements that have been made internationally – are executive agreements, where there is no congressional role.

CORKER: Yeah, but very seldom has there been a case where Congress has played such a role through the congressionally-mandated sanctions. And that's all we're focused on – is making sure that before what we put in place are alleviated – the sanctions we put in place are alleviated – that on behalf of the American people, we're able to go through every detail of this, and understand and ensure that it's going to meet the test of time.

Iran is the biggest exporter of terrorism in the world; and certainly, in the region. And for this to end up being a bad deal, where they end up getting a nuclear weapon – and, by the way, have dollars available to export, in the region, terrorism in a more full way – that is a terrible place for the United States and for the region. And so, Congress just wants to be assured.

Later in the segment, when Senator Corker underlined that "there are many members on the Democratic side that have come to agree with that thought process," Cuomo shot back that "there also seems to be a division. I do not believe you'd get the same sentiment from the State Department or the White House – that pressure from Congress is making it easier for them to negotiate. I mean, that wouldn't even really make sense from their perspective."

The CNN journalist spent the last portion of the interview hounding his Republican guest over the lack of an alternative from Congress:

CUOMO: There's no question that there's reason for concern, and I'm sure that that is what is helping motivate the bipartisanship that you're speaking to – which is certainly somewhat uncommon in the current climate. But you know you're not going to like the deal – right? Almost by definition, when you negotiate something that is this prickly, both sides are someone disappointed at the end of it. And in lieu of no other alternative that's coming out of either the Senate or the House, you're kind of setting up a very difficult standard for the White House to satisfy – don't you think?

CORKER: I don't think so at all. I think that we have most – the large majority of the people in the United States Senate – are sober and thoughtful people. And I think everyone understands the stakes here. This is a very, very-

CUOMO: But there is no other plan being offered is what I'm saying-

CUOMO: There is no other plan being offered. You don't have your own deal on the table – right? You're taking a vote as to whether or not you get to approve the State Department's deal – the negotiators' deal-

CUOMO: You don't have your own deal.

CORKER: No. I mean, I don't think that's our role. Our role is to advise and consent. This puts our branch as a more co-equal branch. This is something that – again, it's probably the largest geopolitical agreement that will happen during the service of most senators here in the United States Senate. And I'm thankful that on a strong, strong bipartisan basis, people believe that this is something that Congress ought to be doing. I'm also thankful that the integrity of this process –  it looks like – will absolutely remain in place. And so, I'm – I absolutely believe that we are doing the right thing on behalf of the American people.

Just look right now, Chris, at the disagreement that's taking place relative to what this deal even is. Iran is saying one thing; obviously, we're saying something else; and some of the other countries – some things in between. I think it's very, very important to the stability of the region; to the world; to the safety of Americans; that Congress have a role in this. I believe we struck the exact right balance in the agreement that will be voted on today, and I'm hopeful that we're going to be very, very successful.

CUOMO: Well, obviously, the goal in mind is to make it an easier process, not a more onerous one. We know you have that in your mind as well-

CUOMO: Senator Corker, thank you for joining us to talk it through on New Day-