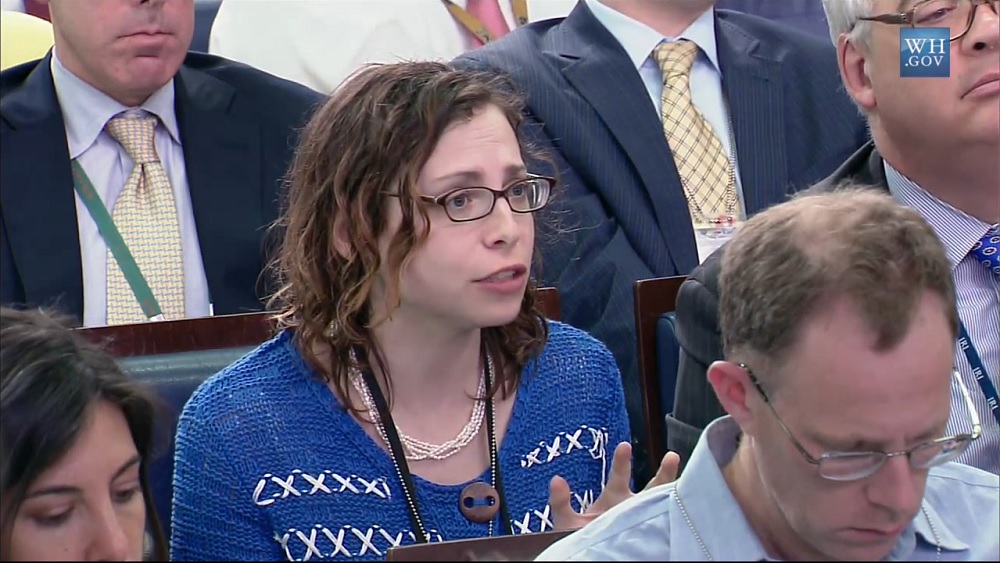 Sarah Wheaton touted the new "gender-neutral" bathroom at the White House as "the latest in a series of symbolic steps the Obama administration has taken to work the priorities of the LGBT community into its broader themes of inclusiveness and tolerance" in a Thursday item on Politico.com. Wheaton played up how "the newly designated restroom is an example of how the administration has been advancing the discussion by raising the profile of transgender issues, an area of debate that is especially hotly contested right now."

The correspondent's article, "Latest White House feature: Gender-neutral restroom," read more like an Obama administration press release than a press report. Wheaton quoted exclusively from White House spokesman Jeff Tiller, the President himself, White House senior adviser Valerie Jarrett, and Mara Keisling of the National Center for Transgender Equality. After using her slanted "inclusiveness and tolerance" line in her lead paragraph, the writer quickly followed with her "advancing the discussion" statement about the administration.

Wheaton underlined that the bathroom designation is a "follow-up on Obama's executive order, which went into effect Wednesday, banning discrimination against gay and transgender employees of companies that contract with the federal government." She continued by asserting that "the move advances a theme of openness Obama has been trying to promote in recent years, as he has elevated the concerns of gay and lesbian Americans to a level of moral urgency similar to that of the most prominent civil rights issues on the national agenda."

Besides his most famous gesture — his endorsement of same-sex marriage — Obama also captured attention when he saluted the struggles of gay Americans in his speech last month in Selma, Alabama, marking the 50th anniversary of one of the most important marches of the civil rights movement. In a passage about how Americans have always embraced social change, Obama declared: "We're the gay Americans whose blood ran in the streets of San Francisco and New York, just as blood ran down this bridge."

Obama also used the word "transgender" in this year's State of the Union address, the first time a president has used the word in such a prominent speech. The administration has tried to advance LGBT issues at a nuts-and-bolts policy level, too: it announced last year that Medicare would start covering sex-reassignment surgery.

However, Wheaton left out that the Democrat voiced his opposition to same-sex "marriage" during his 2008 campaign. This was his position on the controversial issue until May 2012.

The former New York Times correspondent later dropped her excerpt from Jarrett, who lauded the President's executive order: "The president is determined to lead by example. He has hired more openly LGBT Americans to serve in his administration than any other in history. And we have closely examined our internal policies on everything from benefits, to restroom access, to how we invite people to events, to ensure that everyone who enters this building feels safe and fully respected."

Wheaton concluded by contrasting the Obama administration's bathroom move to proposed state-level legislation that would supposedly "discriminate" against transgender people:

The move comes as several state legislatures have considered laws that would restrict which public restrooms transgender people are allowed to use. Republicans in Arizona, Texas, Florida and Kentucky have backed the measures, often as a way to protect against sexual predators....

Transgender advocates have attacked the laws as discriminatory, and praised the White House for setting what they consider an important standard of openness.

"It is heartening to see that, even if legislators in some states are attacking the dignity and humanity of transgender and gender non-conforming people, at least the White House is still moving in the direction of dignity and common sense," said Mara Keisling, executive director of the National Center for Transgender Equality.