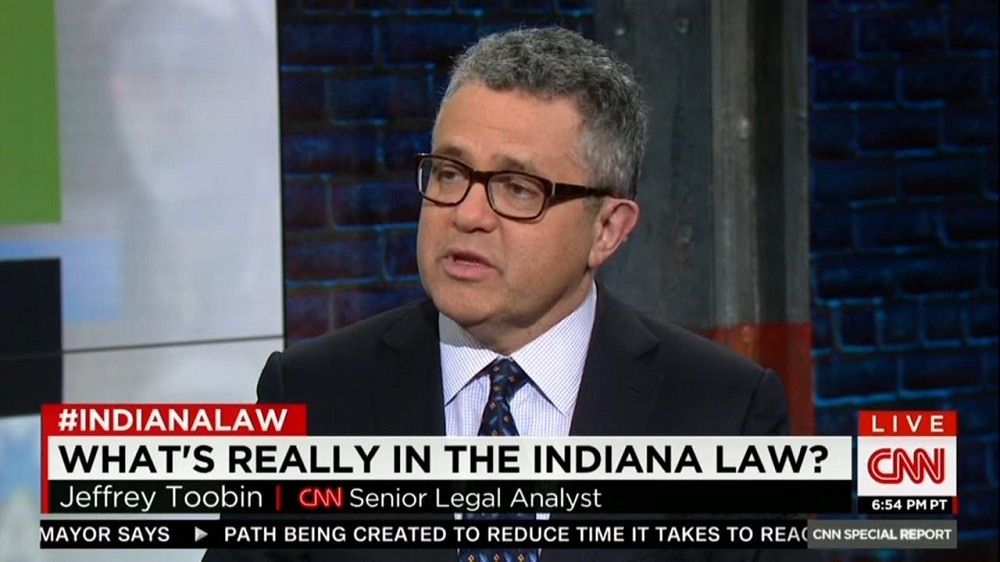 Jeffrey Toobin likened social conservative Christian business owners who refuse to participate in same-sex "marriages" to advocates of racial segregation during a Monday special on CNN: "This is, I think, precisely parallel to the people in the '50s and '60s, who thought there was a religious obligation to keep the races separate – and they really believed that."

The liberal CNN senior legal analyst continued by underlining that "we made a decision, as a society, that...we are not going to allow that...even if you actually believe it. And the question now is, are we going to do the same thing for homosexuality and same-sex couples?" [video below]

Anchor Chris Cuomo turned to Toobin and Professor Jonathan Turley of George Washington Law School for a legal discussion of Indiana's newly-passed Religious Freedom Restoration Act, which has come under intense fire since Governor Mike Pence signed it on Thursday. Cuomo proposed a hypothetical situation to Turley: "I am the business owner...You come to me and you say, hi, I'm marrying my partner – another man – and we'd like you to do X service for us. We want you to do the flowers. I say, nope. I'm a Christian, and being gay is wrong – somebody told me. I'm not supporting what you do. How does the law help me?"

The Washington, D.C.-based legal expert answered, in part, by pointing out the concerns of religious people:

JONATHAN TURLEY, LAW PROFESSOR, GEORGE WASHINGTON UNIVERSITY: ...I think, in fairness to the people on the other side of this debate...this is a debate that's been long ignored, and has been long in coming – that there it needs to be some dialog as to where these lines are being drawn. You know, there are people of faith out there that have strong objections to playing a role, for example, in a gay marriage. And we've been very unclear in this country as to where the freedom of religion begins or ends in relationship to discrimination. You've got two equally important values: our fight against bigotry, and our support of free exercise.

Toobin replied to this with his segregation reference (it should be pointed out that CNN regular John Avlon did something similar earlier in the day on Monday):

JEFFREY TOOBIN: I think Jonathan's right that we should be explicit – explicit about this. But we should be explicit that this is, I think, precisely parallel to the people in the '50s and '60s, who thought there was a religious obligation to keep the races separate – and they really believed that. And they said, they didn't want to play any part in allowing the races to get – to be together; to have racial intermarriage; that have people swimming in the same swimming pools. And we made a decision, as a society, that – you know what? We're not going to indulge that. We are not going to allow that in our society, even if you actually believe it. And the question now is, are we going to do the same thing for homosexuality and same-sex couples?

Cuomo continued by asking Turley, "The question, then, becomes to you is, was this the right way to advance the ball – and what you're saying should be a discussion – was creating what is ultimately a clumsy piece of legislation? It's so broad in terms of giving corporations the right to act religiously, and it saying that you could do it on a basis...it doesn't even have to be the central or core part of your faith. Is this the right way to do it?" The professor replied by acknowledging his fellow guest's segregation point: "I think it is a clumsy law, and I think it is unfortunate. I think that the debate that you're talking about, however, is being fueled. I think Jeff's point is correct. There is an analogy to what occurred before. But in Hobby Lobby, the Supreme Court did say that corporations did have a religious right. They could exercise those religious rights."

Toobin then chimed in to dispute Turley and Cuomo's characterization of the law. The George Washington University law professor ended the segment by repeating one of his main points from earlier in the segment.

TOOBIN: ...I'd like to take disagree with both of you about how clumsy this law is. I don't think the law is clumsy. I think it's clear. The problem is, the people who – the sponsors of it – the governor, the lieutenant governor – they don't want to acknowledge what they did. What they did was they gave a license to people not to participate with gay people who are having weddings-

TURLEY: I don't think – I think part of the problem, Jeff, that I'm having is I still don't know where the line is drawn on the other side, in terms of this clarity. You know, we've had cases where people have – or bakeries have refused to do cakes that had anti-same sex marriages; and we have Christians that say they don't want images that are pro-same sex marriage. Where do we draw the line on free exercise and free speech? I don't think it's as easy as people suggest. I think there are serious issues here. And I, frankly, I'm not sure where this goes.

I've – and for over a decade, I've been writing about this collision occurring between free exercise and anti-discrimination laws, and I don't have a clear answer. But I do think that we're fooling ourselves – in that we say that there is a clear line that can be drawn here between those two cakes – which is legal and which is not?