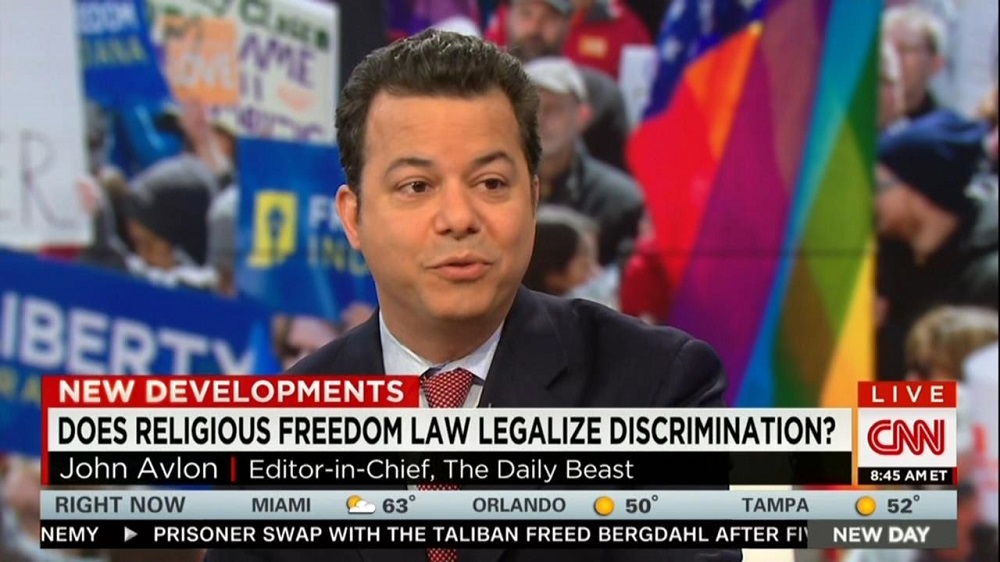 On Monday's New Day on CNN, Daily Beast editor-in-chief John Avlon likened Indiana Governor Mike Pence's defense of his state's new religious freedom law to George Wallace's fight for racial segregation. Avlon asserted that Republican politicians "don't want to say they're in favor of bigotry. So what you get is that incredibly awkward stonewalling by Mike Pence." He added that "this puts him in the same position as George Wallace...by saying that...I'm not in favor of segregation. I never have been. This is about states' rights and the Constitution." [video below]

The CNN analyst also underlined that social conservative pressing this issue is "the tyranny of dog whistle politics...These politicians are terrified to vote against this because they don't want to be seen – and vulnerable in a primary challenge – people who say they aren't Christian enough and aren't conservative enough." Avlon later contended that the backlash against Governor Pence would sink any presidential aspirations: "Whenever there's this kind of pandering to the outer reaches of politics, it ends up having unintended consequences that derail national ambitions. Pence's blowback is going to be significant."

Anchor Chris Cuomo, whose bias in favor of LGBT activists in documented, introduced the segment with Avlon and his wife, Margaret Hoover, with some slanted questions on the Indiana controversy: "Are we moving toward being a country of religious inclusion or exclusion? Witness Indiana Governor Mike Pence – the latest to pass a religious freedom law. He's not the only one. There's about 20 states that have these. And are they really just thinly-guised efforts to oppress gays?"

Cuomo and co-anchor Alisyn Camerota first turned to Hoover and introduced her as "president of the American Unity Political Action Committee, which lobbies for changes to the law – which, ultimately, were voted down." However, she didn't explicitly mention that this organization is a pro-LGBT agenda PAC. Camerota also complimented the socially-left activist: "Margaret, you have a great perspective on all of this."

As you might expect, Hoover lamented that the law passed:

MARGARET HOOVER, REPUBLICAN CONSULTANT: I'm really riled up about this-

ALISYN CAMEROTA: Okay. Tell us – what's going on in Indiana?

HOOVER: Well, one of the things that Mike Pence doesn't probably know, and what conservatives don't know, is that the genesis of these laws actually started in the 1990s to protect north – Native American/Indian tribes to be able to use peyote. And it was a case by the ACLU that went all the way to the Supreme Court....all these Religious Freedom Restoration Acts that were passed in the '90s, after the federal law was passed, were to protect religious minorities, like Native Americans Indian tribes – the Amish. It was never intended to protect major corporations...it says it's for an individual. But it's actually now – like, the Catholic Church is a religious minority now – and anybody – it's so broad that anybody can claim these exemptions. And it's very heightened scrutinies. So it puts a lot of power in the hands of judges to decide, on their own, who is going to have a religious freedom claim and who isn't.

CHRIS CUOMO: You're too bold on this issue, so I must push you back by making it a little bit more narrow politically. Where are your people? They passed this law. Not one of them will come out. We went after two dozen lawmakers who were involved in this. They don't want to come out and defend it. What is that about?

HOOVER: ...There's a very robust coalition of Republicans in Indiana who have been working for three years to push back – actually, an amendment to their state constitution to define marriage between a man and a woman. Because that effort failed, this, I think, is seen as a consolation prize. They're able to pass this Religious Freedom Restoration Act, which still allows, frankly...social conservatives view this as a way of inoculating against what many people view as the inevitable decision in June that the Supreme Court will make – that will allow marriage to pass in the 13 states that don't have marriage legally now.

Avlon then chimed in with his Wallace comparison and "tyranny of dog whistle politics" line:

JOHN AVLON, EDITOR-IN-CHIEF, THE DAILY BEAST: Which is a mistake to assume that's a fait accompli. But you do get a sense of the bunker mentality that's going on right now among social conservatives. And for legislators, what you just asked – it's really the tyranny of dog whistle politics, right? These politicians are terrified to vote against this because they don't want to be seen – and vulnerable in a primary challenge – people who say they aren't Christian enough and aren't conservative enough.

At the same time, they don't want to say they're in favor of bigotry. So what you get is that incredibly awkward stonewalling by Mike Pence yesterday, where he cannot answer a simple question whether or not the State of Indiana should be able to discriminate against gays and lesbians. This puts him in the same position as – as – as George Wallace was a generation ago, by saying that – you know what? I'm not in favor of segregation. I never have been. This is about states' rights and the Constitution. So you elevate the ugly to try to bring political purity, and it never, ever works.

Hoover and her husband resumed their attack on the Indiana Republican individually and their social conservative enemies collectives later in the segment:

CUOMO: The first part of the byte, by the way, was Governor Mike Pence saying that he does not intend to extend protections to the LGBT community as a class...which would make this law useless.

HOOVER: ...And so, two amendments were offered during this process. One amendment was an amendment that explicitly that said, fine, pass the Religious Freedom Restoration Act, but balance it with civil rights. Don't have it apply to civil rights laws. They shot that one down. The second one said, fine then – why don't you pass the sense of the senate, or sense of the state – saying, it is our intent of the state to eliminate discrimination? They refused to do that as well.

CUOMO: It's why he didn't answer the question-

CAMEROTA: So is this – yeah. Is this a rocky road politically for Governor Pence?

AVLON: Yes – certainly, if he has national – you know, ambitions, which have been long – long rumored. But this is really – you know, whenever – whenever there's this kind of pandering to the outer reaches of politics, it ends up having unintended consequences that derail national ambitions. Pence's blowback is going to be significant. That was an ugly, awkward interview yesterday he had. That is embarrassing – because, at the end of the day, he's got nowhere to go, because he can't-

CUOMO: And it wasn't George's fault. It wasn't a gotcha interview-

AVLON: No way! It was totally direct-

CUOMO: He asked him a simple, straight question.

HOOVER: Really quick – you can balance religious freedom with protections against (sic) minorities – including LGBT people. The State of Texas has done it; the State of Missouri has done it. There are models for doing it. Indiana should just take a page out of their book. This is not difficult.