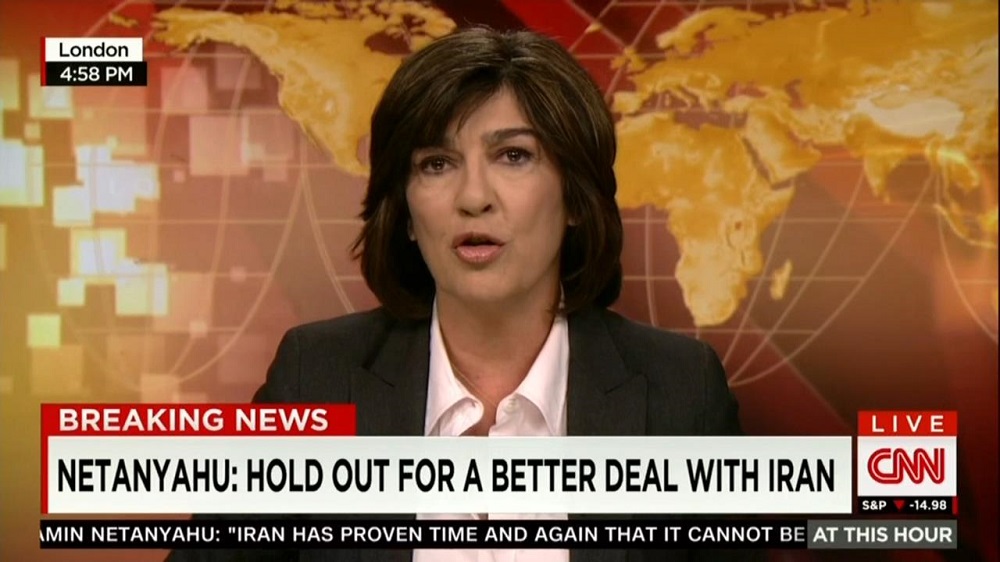 Moments after Benjamin Netanyahu finished his speech to Congress on Tuesday, liberal CNN correspondent Christiane Amanpour asserted that Israeli prime minister was hyping the threat of a nuclear Iran, and likened him to a famous movie character: "It was a very dark, Strangelovian speech painting a picture of a really dystopian world, raising the specter...of a genocidal regime spraying nuclear weapons to annihilate the whole world and the whole region." [video below]

Anchor Wolf Blitzer turned to Amanpour for her take on Netanyahu's address. The Iranian-born journalist cited colleague Jim Acosta, who had appeared just before Blitzer brought her on, and continued with her movie reference:

WOLF BLITZER: Christiane Amanpour, your thoughts right now – what do you think?

CHRISTIANE AMANPOUR: Well, Wolf, just as Jim [Acosta] says, there was nothing new. You know, you were all worried and – and reporting that, perhaps, there would be some details of the negotiations that would be leaked, or that there were some things that none of us had known in the public sphere that we might know after this speech. But that doesn't seem to have been the case.

Instead, Wolf, it was a very dark, Strangelovian speech painting a picture of a really dystopian world, raising the specter of a genocidal nation – a genocidal regime – spraying nuclear weapons to annihilate the whole world and the whole region. Now, obviously, many people are very concerned about Iran, and there is a deep lack of trust. But surely, the same was said of the Soviet Union all those years ago.

And so, the idea presumably that the United States and its allies have is to have some enforceable arms control. You know, Prime Minister Netanyahu has said, hold out for a better deal. Well, everybody would like to see a better deal eventually. But the question is, when and how you get there? Is it immediately or is it step by step?

He said, lift – do not lift restrictions until Iran stops its aggressive behavior. Well, the only actual restrictions on Iran's nuclear program are under the current interim agreement. The rest, of course, are sanctions, and there is no lifting of any sanctions at the moment. In fact, that causes the Iranians a great deal of – of pain in these negotiations, and there's been very little lifting under the interim deal. Beyond that, you know, the U.S. and Israel both want to make sure that Iran does not become a nuclear power. Israel wants to do it by denying any capability, and the United States and the allies want to do it by persuading Iran not to exercise that capability and not to produce any nuclear weapons. So, that's where the difference is.

This isn't the first time that Amanpour's slant against Israel has emerged. Back in November 2012, the correspondent contended on ABC's World News that the Middle Eastern country "cause[d] too many civilian casualties" during the later 2008/early 2009 conflict with Hamas in Gaza.