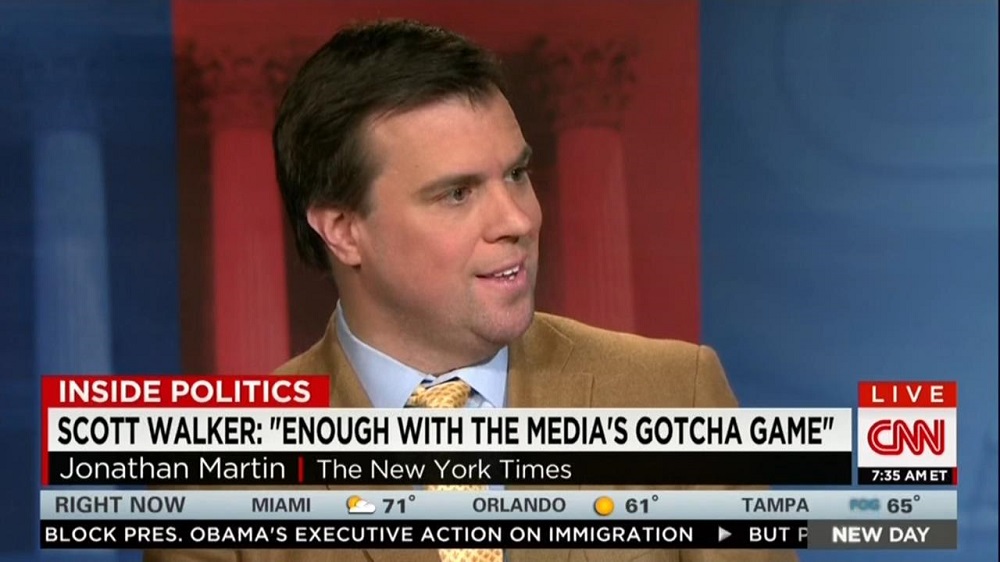 Jonathan Martin of the New York Times targeted Scott Walker on CNN's New Day on Monday over his "gotcha game" attack on the media." Martin contended that Governor Walker "doesn't want to answer these kinds of questions – which is problematic, but it also gives him an opportunity on the right." He added that "it's all kind of a depressing, cynical exercise, frankly, because...Walker doesn't want to play the game, and by not playing the game, he then gins up sympathy on the right against the media." [video below]

CNN's John King brought on Martin and NPR's Juana Summers for his regular "Inside Politics" segment on the morning newscast. King used the controversy over Rudy Giuliani's recent remarks about President Obama as a jumping-off point to talk about the Wisconsin governor: "He [Walker] was asked over the weekend by Dan Balz and Robert Costa of the Washington Post about the Giuliani controversy. He was also asked if he thought the President was a Christian. And he said, look, stop asking me these questions.  Here's what's Scott Walker Tweeted out on Saturday: 'Enough with the media's gotcha game. We started our American Revival' –  that's his PAC – 'to talk about big, bold, ideas.'"

The journalist then turned to Summers and asked, "If you're going to run for president, is it a gotcha game; or is it, hey, you want to be president?" The NPR reporter underlined that Walker exposed an apparent weakness by his unwillingness to address the issue:

JUANA SUMMERS, NPR: To a degree, I think Govenor Walker has a point, but if the question is one you don't like, you can always not answer it.

Here's what's really interesting about Scott Walker, I think, is that he is incredibly accessible to the media. If you look at after the comments that Guiliani made, he gave a slew of interviews – including the interview you mentioned to the Washington Post. Many kind of changed tack, and decided to – when faced with questions about the President's religion – say, you know, I'm going to steer away from that. And I think that shows just how different running for governor is – even though he had, obviously, the very high-profile recall election several years ago – from the scrutiny that comes with a presidential race, and that's something that he and his advisers have to keep in mind. There is nothing like the scrutiny you get. There's nothing like the media attention that you get – and that we were part of back in 2012. And I think that he, perhaps, is not as road tested as, perhaps, he thought he was. And I think that's what we're seeing really here.

King followed up by spotlighting how the potential Republican presidential candidate was "getting a good ride actually" for his reply on the Giuliani controversy, and cited a "Red State posting here from Erick Erickson this morning: 'Bootlickers still pretend Obama is a Christian.'"  The CNN journalist continued by asking Martin, "What do you make of this?" The New York Times journalist responded with his "depressing, cynical exercise" answer:

JONATHAN MARTIN, THE NEW YORK TIMES: Scott Walker is nobody's fool, and he doesn't want to answer these kinds of questions – which is problematic, but it also gives him an opportunity on the right – which by posting a link to his PAC to, sort of – you know, get some pop out of this, he's taking advantage of. I mean, it's all kind of a depressing, cynical exercise, frankly, because – you know, Walker doesn't want to play the game, and by not playing the game, he then gins up sympathy on the right against the media – which enables him to raise more money. And it's all a very circular deal.