MSNBC Guest's Bigoted Jab at Jindal: 'Trying To Scrub Some of the Brown Off of His Skin' 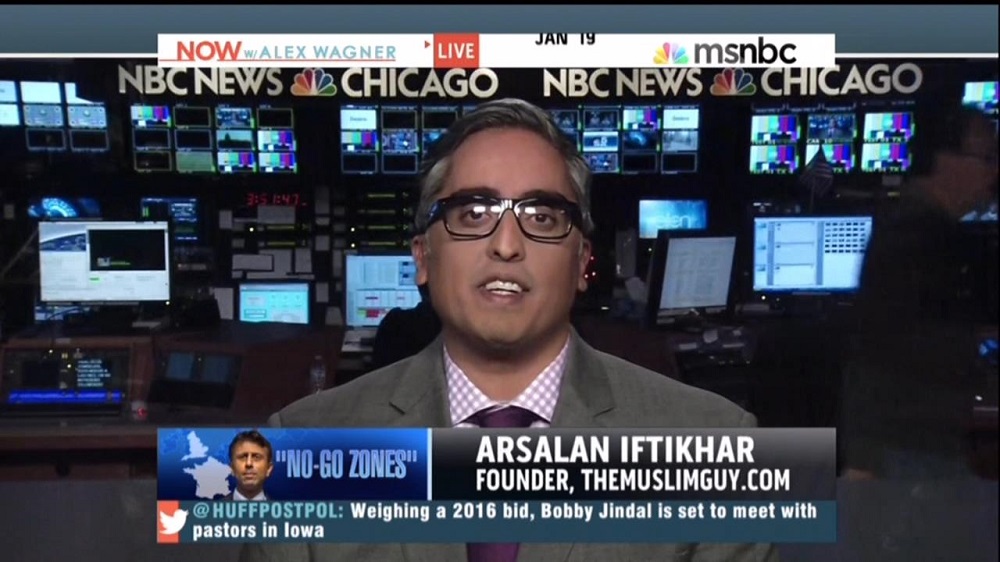 Arsalan Iftikhar of Islamic Monthly magazine made a bigoted attack on Louisiana Governor Bobby Jindal on Monday's Now with Alex Wagner on MSNBC. Host Alex Wagner hyped how Jindal was "asked by an interviewer about no-go zones and said, 'I did say so-called no-go zones, and I think that the radical left absolutely wants to pretend like this problem is not here. Pretending it's not here won't make it go away.' Somehow, this is all the fault of the radical left."

Iftikhar replied by basically saying that the minority Republican politician was trying to make himself more white: "You know, I think Governor Jindal is protesting a bit too much. He might be trying to – you know, scrub some of the brown off of his skin as he runs to the right – you know, in a Republican presidential exploratory bid." [video below]

The Islamic Monthly senior editor of Pakistani descent later doubled-down on his attack on the Indian-American governor, according to a report on Monday evening from CNN: "I will apologize to Bobby Jindal when he apologizes to seven million American Muslims for advancing the debunked 'Muslim no-go zones' myth."

Mere hours later, MSNBC surprisingly decided to ban Iftikhar from its airwaves. A spokesman for the left-wing network told the Mediaite blog on Tuesday, "We found this guest's comments offensive and unacceptable and we don't plan on inviting him back."

Wagner brought on the lawyer for his take on Governor Jindal's recent "no-go zone" remarks. She led the segment by lamenting how "on this Martin Luther King Day...we, unfortunately, have to talk about...conservatives fomenting Muslim anti-terror hysteria." The host continued by asking, "Are you surprised that somehow, the debunking of these fake 'no-go zones' has not made its way to the biosphere that Governor Jindal exists in?"

Unsurprisngly, Iftikhar replied, in part, by going after Fox News: "Fox News has a long history of – you know, pandering to the lowest common denominator of – you know, anti-Muslim sentiment here in the United States. And so, I'm not surprised at all that Governor Jindal has latched onto it stupidly."

Wagner followed up by citing the governor's latest comment, and added her "somehow, this is all the fault of the radical left" snark." After making his inflammatory "scrub some of the brown off of his skin as he runs to the right" jab, Iftikhar continued that "it's the worst...common denominator of American politics to marginalize any minority demographic group. And I'm pretty sure that Governor Jindal will come to his senses, hopefully, in the next couple of days."

The MSNBC host revisited her lament about supposed conservative-driven "Islamophobia" later in the segment:

WAGNER: ...I guess I wonder – you know, when we talk about people coming to their senses, the, sort of, anti-Islam – you know, Muslimphobia is a very pronounced sentiment in the United States, and a lot of people will say, okay, America – it feels like radical Islam is at war with the United States; at war with the West and all of its principles. As a result, some states – I think all but 16 states in this country – have considered passing anti-sharia laws, which are known as anti-foreign law provisions. They don't specifically call out sharia. But, you know, that's a dramatic – that's a dramatic number of states that have tried to pass this. Seven states currently actually do ban foreign law/sharia law. I mean, when you have a, sort of, tidal wave of governance that...seizes upon these feelings of fear and the other-ization of a vast number of people – I mean, how do you reverse that tide – especially in the wake of things like Paris?...

IFTIKHAR: Yeah. You know, Alex – you know...it actually all comes down to money....the Center for American Progress, a few years ago, came out with a report called 'Fear Incorporated,' which showed that the top five anti-Muslim activists in the United States receive $42 million per year to push these narratives on Islam and Muslims. The guy, David Yerushalmi, who basically was the mastermind behind the anti-sharia legislation, is one of those five people getting the $42 million that CAP highlighted in their report. And so, you know, when those of us on the left have – you know, one-tenth of that budget, if that – you know, it's obviously going to – you know, mean that we're going to see right-wing, neo-conservative meta-narratives about Islam and Muslims in the media airwaves, and people like this are getting Koch Brothers-levels of money.

Iftikhar certainly was pandering to Wagner with his Center for American Progress reference (the host used to work there) and MSNBC's audience in general with his "right-wing, neo conservative" and "Koch Brothers-levels of money" phrases.

On Tuesday, Governor Jinal responded to the senior editor's attack during an interview with the Washington Examiner:

"It's embarrassing for MSNBC to give voice to such shallow foolishness. Much like Michael Moore denigrating our military servicemen, these comments deserve no comment," Jindal told the Examiner on Tuesday....

Jindal, an Indian-American and a Roman Catholic, told the Examiner he's unimpressed with Iftikhar's criticism.

"I will not be silenced," he said. "Radical Islam must be stopped, and we must stop pretending. It is time for the Western world to face reality. These are not cultural differences, this is the difference between right and wrong. It is wrong to treat women as second-class citizens and it is wrong to shoot civilian teenagers in the head for watching soccer on [television]. Period," he added.