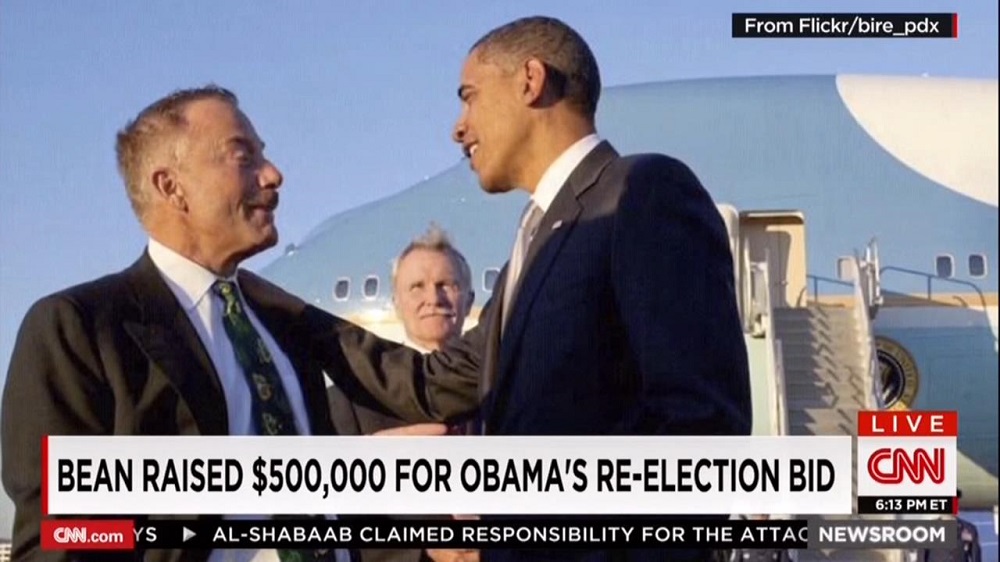 CNN stood out on Sunday and Monday for actually covering the sex abuse charges against Terry Bean, a "major fundraiser for President Obama," as correspondent Erin McPike labeled him. The cable network devoted three full segments and two news briefs to the criminal charges against Bean, who is also the co-founder of the left-wing homosexual activist group Human Rights Campaign. [video below] As of Monday morning, the Big Three networks have yet to cover the story on their morning and evening newscasts.

VICTOR BLACKWELL: A gay rights activist and vocal supporter of President Obama has been indicted on sex crimes. Sixty-six-year-old Terry Bean was arrested last week on charges of sexual abuse related to a 15-year-old boy in Oregon. Bean's attorney denies the charges – saying, in a statement, that Bean is the victim of an extortion ring.

Over six hours later, anchor Fredricka Whitfield introduced McPike's report on CNN Newsroom by highlighting how a "a man President Obama once called – quote, 'a great supporter and friend' – is facing sex abuse charges in Oregon. Democratic donor Terry Bean is charged with abusing a 15-year-old boy last year." McPike led the segment with her "major fundraiser" term, and pointed out that the suspect raised a "reported half million dollars for his [Obama's] 2012 re-election campaign."

The CNN correspondent then played two straight soundbites of the President complimenting Bean, and continued by outlining the allegations against the left-wing activist:

PRESIDENT BARACK OBAMA (from July 24, 2012 event): I want to thank somebody who put so much work into this event – Terry Bean. Give Terry a big round of applause. (audience cheers and applauds)

MCPIKE: And here's Mr. Obama praising Bean at a 2009 event for the Human Rights Campaign, the politically-influential gay rights group he co-founded.

MCPIKE: Now, police say Bean, who's 66, has been arrested in Portland, Oregon – charged with sodomy and sex abuse of an underage boy – reportedly a 15-year old. Also arrested on the same charges: 25-year-old Kyle Lawson – identified in news reports as Bean's former boyfriend.

In a statement, Bean's lawyer says – quote, 'Over the course of several months in 2013 and 2014, Terry was the victim of an extortion ring – led by several men known to law enforcement. This current arrest is connected to the ongoing investigation of that case, in which Mr. Bean has fully cooperated. No allegations against Terry Bean should be taken at face value. We look forward to the opportunity to clear his name.'

Lawson's former attorney told the Oregonian newspaper that Lawson had stumbled upon a camera Bean had used to secretly record sexual encounters with him and other men; took screen shots; and hoped to secure money from Bean in an exchange for their return. That led Bean to allege extortion.

McPike concluded the segment by noting that she had "asked the White House if they have had a reaction to this situation. We have not heard anything back yet. We have, however, heard from the Human Rights Campaign, and a spokesman for that organization told us in a statement that Terry Bean has taken a voluntarily leave of absence until these issues are resolved."

Anchor Poppy Harlow replayed the correspondent's report almost three and a half hours later on CNN Newsroom. Harlow then brought on network legal analysts Mark O'Mara and Joey Jackson for a panel discussion segment on the charges against Bean.

The following morning, during a brief on Monday's Early Start, host Deborah Feyerick spotlighted the "growing fallout" over the "arrest of a gay activist and major Democratic fundraiser, who's accused of having sex with a 15-year-old boy." She then summarized the accusations against Bean and his former boyfriend.