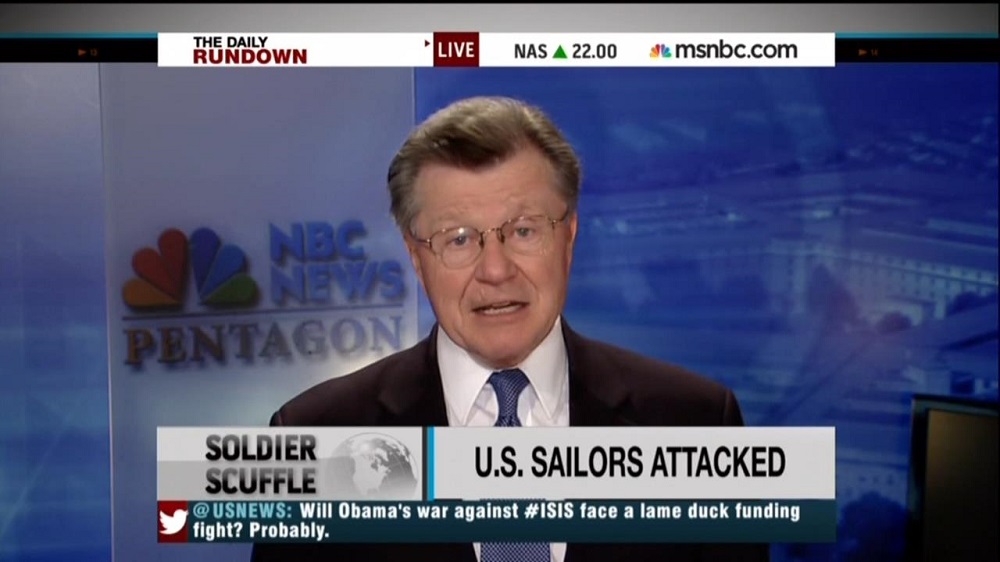 On Thursday's Daily Rundown on MSNBC, Jim Miklaszewski misidentified the political ideology of the protesters that attacked three American sailors in Istanbul, Turkey. Miklaszewski reported that "these radicals – these right-wing radicals, who are pro-communist and anti-U.S. – were more intent on propaganda than causing these individual sailors harm." The perpetrators are members of the Turkish Youth Union, which hold left-wing views. [MP3 audio available here; video below]

This wasn't the only error during the segment. An on-screen graphic headlined the "Soldier Scuffle: U.S. Sailors Attacked." Obviously, soldiers and sailors are two different professions. The trio that were attacked were sailors from the U.S. Navy destroyer U.S.S. Ross.

MSNBC host Ronan Farrow actually made the same mistake – not once, but twice – during a segment with Miklaszewski on the Wednesday edition of his program: [video below]

RONAN FARROW: We've got an update now on that disturbing story we brought you earlier – some incredible, dramatic visuals of three U.S. Navy soldiers from the U.S.S. Ross being assaulted in Istanbul, Turkey. This happened yesterday. The soldiers were on shore leave, as we told you, when they were attacked by members of the Turkish Youth Union. The sailors were hit with rocks, had paint thrown on them, bags were placed over their heads – just video that's going viral right now.

MSNBC's Jim Miklaszewski is with us. He's following this from the Pentagon. Thanks, Jim. What more do we know about this incident, and are we getting any word about the motivations of these attackers?

JIM MIKLASZEWSKI: Just a quick correction: you know, no navy sailor is going to be – want to call – want to be called a soldier.

The correspondent then made the same mistake that he would go on to repeat on Thursday – that the violent demonstrators were "part of a right-wing activist group called the Turkish Youth Union."

It should be pointed out that NBCNews.com's Wednesday article on the incident correctly identified the political ideology of the group: "The Turkish Youth Union is described as a left-wing nationalist revolutionary group opposed to 'American imperialism.'"

The previous evening, the Big Three networks' evening newscasts censored the far-left agenda of the demonstrators. NBC's Brian Williams reported that "these were apparently the actions of a fringe group." ABC's Martha Raddatz stated that the "the attackers [are] members of an ultra-nationalist group called the Turkish Youth Union." Oddly, CBS's David Martin detailed that "the anti-American student group....pushed and pelted...[the sailors, who] briefly had hoods slipped over their heads. Hoods have become an ugly symbol of the war between the West and Islamic terrorists."

The transcript of the relevant portion of the Jim Miklaszewski segment from Thursday's Daily Rundown on MSNBC:

PETER ALEXANDER: Mik, separate topic, but same region: there's some compelling video that we've now seen from Turkey. This is about a group of American sailors who appear to have been attacked. We watched them being attacked in the video. Have we heard anything more from the Pentagon about this, or anything more about exactly what we know about these individuals?

JIM MIKLASZEWSKI: The initial response here is that – you know, they – they consider the attack against those three enlisted sailors, who were on shore leave there in Istanbul, to be reprehensible – and they were by a bunch of thugs. But quite frankly, people here were somewhat relieved that despite the physical contact – there was a lot of pushing and shoving – no-

MIKLASZEWSKI: No – no punches were thrown, and it appeared that these radicals – these right-wing radicals, who are pro-communist and anti-U.S. – were more intent on propaganda than causing these individual sailors harm – evidenced by the fact that almost immediately after this event occurred, they threw it up on YouTube.