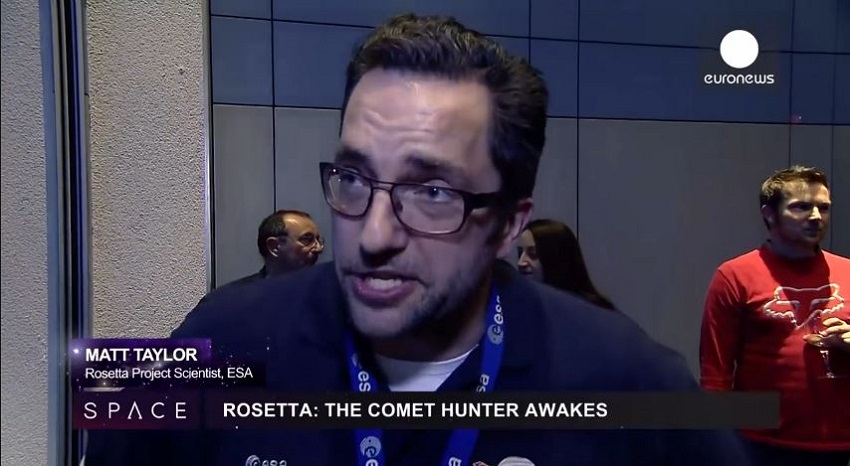 The European Space Agency made history on Wednesday, after its Philae lander touched down on Comet 67P/Churyumov–Gerasimenko – the first spacecraft to land on a comet. CNN, Fox News Channel, and MSNBC all interrupted their regular programming with the breaking news. However, a vocal group of leftists on Twitter brushed this stunning development aside to berate one of scientists taking part in the interplanetary endeavor – for his choice in Hawaiian shirts.

Several British media outlets singled out ESA project scientist Dr. Matt Taylor, a native of London, for his "unorthodox appearance," as The Telegraph put it, which includes "colourful dress sense and array of body art." The Daily Mail's Wednesday article noted that Dr. Taylor "has become a Twitter sensation," and was "so confident of success that he already has the triumphant moment of landing tattooed on his leg."

Erin Brodwin, science reporter at Business Insider, decided to zero in on some of the British scientist's critics on Twitter in her Wednesday write-up. Brodwin hyped that "many of the women following that development — and a few men, too — were made to feel pretty unwelcome in the space exploration sphere when one of the people leading the mission decided to show up to talk about it wearing a shirt covered in dozens of half-naked women."

The journalist then posted a Tweet that had a picture of an exuberant Taylor giving two thumbs-up, as he wore a Hawaiian shirt that had pinup-style art on it. The poster of the picture – Henry Legg, a physics student at University of St. Andrews in Scotland – throttled the scientist for his clothing [update, Wednesday, 6:15 pm: Legg has since deleted the Tweet; a screen cap of his Tweet is now included below]:

Other commenters responded to Legg. One wrote, "I am beyond pissed off. My kid was really interested in the landing but he came on & all she saw was how science isn't for her." (I stumbled upon the controversy, after Twitter user @hormiga complained, "If you think the lead comet robot engineer’s sexist attire isn’t a problem, then you are part of the huge gender problem in STEM" [Science, Technology, Engineering, Math])

Brodwin continued that "after...Taylor wore the shirt while talking to reporters during a global livestream of the comet landing, people watching took to Twitter in frustration," and embedded two negative responses from the social media site. The first post actually came from Rosa Eveleth, a New York-based journalist for The Atlantic:

No no women are toooootally welcome in our community, just ask the dude in this shirt. https://t.co/r88QRzsqAm pic.twitter.com/XmhHKrNaq5

Near the end of her article, the Business Insider writer pointed out that Dr. Taylor "recently participated in a live online chat with the Wall Street Journal in which he was asked how he gained acceptance in such a respected field while sporting sleeve-length tattoos. He responded, 'The people I work with don't judge me by my looks but only by the work I have done and can do. Simple.'" Brodwin then fired her own shot at the European scientist: "If only women could hope to someday be judged that way too."

Some of the other Twitter users who responded to Legg's attack on Dr. Taylor called out the scientist's feminist critics for the tumult that they started:

@physicshenry I think the attention given to the shirt is excessive. Now we are talking this and not Rosseta and Philae. Why?

Another poster underlined that "I think it's horrendous to be honest. Not sure what I'd do about it though. Magazines BY women are just as bad. The guy shouldn't have worn that, should have had some sense. But not worth getting upset." Those two commenters have it right, and I would add that their attacks could be seen as a left-wing version of "slut-shaming."