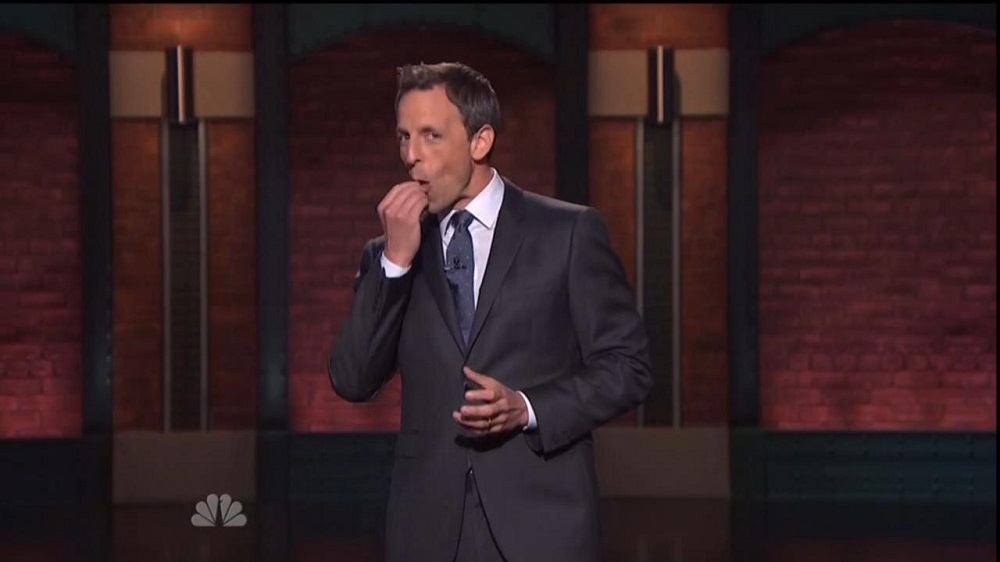 Bill Donahue of the Catholic League ripped NBC host Seth Meyers for his mocking of the Catholic sacrament of the Eucharist on the early Tuesday edition of Late Night. During his monologue, Meyers spotlighted a church in Seattle filing a lawsuit against a neighboring facility that sells legal marijuana, and pretended to be a priest who was high on the drug and started snacking on communion wafers. [MP3 audio available here; video below]

Donohue pointed out in his Tuesday statement, "Seth Meyers Trashes Eucharist," that the church that is "protesting the licensing of a legal marijuana retailer next door...is not a Catholic church: Mount Calvary Christian Church Center filed the lawsuit." The Catholic League president added, "But those who write script for Meyers are not interested in attacking Protestants—it's much more fun mocking Catholics. That they stooped so low as to trash the Catholic celebration of the Eucharist shows the depth of their disorder."

Meyers previously joked that Catholics were "creepy perverts" during the August 6, 2014 edition of his program, as he discussed the controversy surrounding a "Fifty Shades of Grey"-themed hotel near a Catholic church in Vilafranca, Spain.

The transcript of the relevant portion of Seth Meyers's monologue from the early Tuesday episode of NBC's Late Night:

SETH MEYERS: I love this story. A church in Seattle has filed a lawsuit, claiming that the legal marijuana retailer next door is too close to the church. 'It's causing us some problems,' said the priest – through a giant mouthful of communion wafers. (audience laughs and applauds) (Meyers pretends to eat and imitate a person under the influence of marijuana) 'Really – it's like super close to the church. I mean, sometimes it seems like it's coming a little closer.' (audience laughs and applauds)

(Disclosure: MRC President Brent Bozell serves on the board of advisors for the Catholic League)