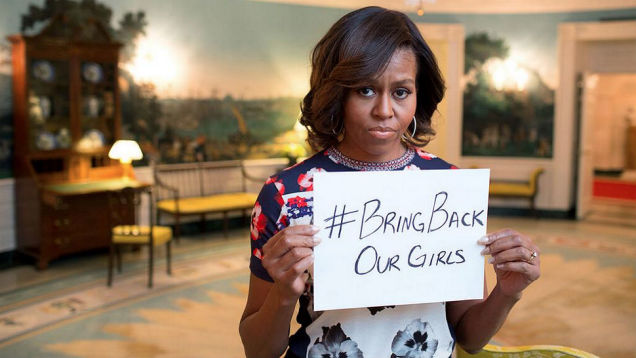 Remember “#BringBackOurGirls?” It was the relentlessly hyped and utterly silly Twitter campaign aimed at the African Islamist terror group Boko Haram. It’s hard to know if anyone actually thought tweets would get radical Islamists to release the nearly 300 Christian girls abducted from their school in Chibok, Nigeria. But it did allow Western liberals to advertise their sympathy. And ineffectualness.

First Lady Michelle Obama was one of the most prominent liberals involved. She was photographed holding a card bearing #BringBackOutGirls, underscored by her sad face – which became the face of “hashtag activism.”

Predictably, the media swooned, impressed that the hashtag had been tweeted millions of times. On the May 7, 2014, ABC World News with Diane Sawyer, the host said, “Late today, First Lady Michelle Obama lent her voice to the chorus calling for urgent action under the banner #BringBackOurGirls.”

On May 8, CBS This Morning co-host Norah O’Donnell said, “the massive online awareness campaign called Bring Back Our Girls now includes Michelle Obama. The First Lady tweeted this photo yesterday and posted it on Instagram. More support can be found from some of the biggest names in Washington, Pakistan, and Hollywood.”

On May 9, Mrs. Obama took over her husband’s weekly address to condemn the abductions. “In these girls, Barack and I see our own daughters. We see their hopes and their dreams,” she said.

“It is a powerful message,” ABC correspondent Hamish MacDonald said. “From a mother in the White House to a father in Nigeria, the resolve is deeply felt.”

Predictably, Boko Haram terrorists were unimpressed. On July 14, 2014, the group released a video mocking the hashtag campaign. And of course by then Twitter had forgotten about Nigeria and returned to cat photos.

“On social media, we were very happy for two to three days because everyone was speaking for this campaign of Bring Back Our Girls,” Pakistani activist Malala Yousafzi told ABC correspondent Amy Roback. “But then it just went down and everyone is silent now.”

And they still are. On April 14, 2015, NBC Nightly News marked the anniversary.

“Tonight marks exactly one year since Boko Haram militants kidnapped nearly three hundred school girls in Nigeria, igniting the ‘Bring Back Our Girls’ campaign that lit up social media,” anchor Lester Holt said. “That campaign has faded even though the vast majority of those girls have not been seen again.”

Correspondent Stephanie Gosk noted that the “campaign went viral, spearheaded by some big names, but millions of tweets then have become just thousands now while Boko Haram continues to attack, kidnap, and kill.”

Absent from that bleak report was any mention of the biggest name – Michelle Obama. In fact, the networks haven’t mentioned the first lady in relation to Boko Haram since Nov. 27, 2014, when NBC profiled one of the few girls who’d escaped her extreme Islamic captors and was studying in the U.S. courtesy of a Christian charity.

Why take FLOTUS out of the equation? Maybe because ‘Bring Back our Girls” was an abject failure – little more than a brief online fad – matched only by the actual efforts on the ground. Nigeria’s police and military have received help from many countries, including the U.S., Britain and France. President Obama dispatched an “interagency team” of federal experts to the country, supported by military personnel and UAVs.

Not only have the Chibok girls not been found (reportedly, they weren’t among those rescued last week by Nigerian police), Boko Haram’s attacks, massacres and abductions have continued. By some estimates, the group has abducted 2,000 women since the beginning of 2014. Women who have escaped or been freed spoke of rape, murder, forced marriage, slavery and malnutrition. 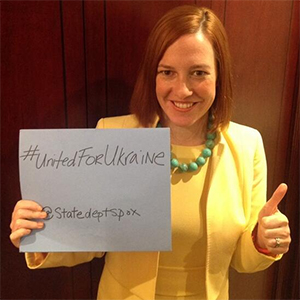