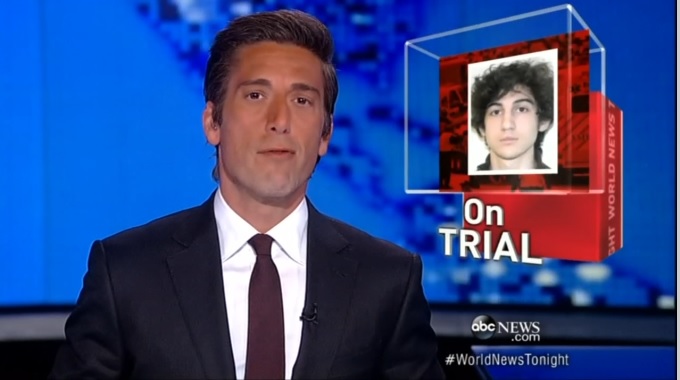 Nearly two years ago, someone planted and detonated a bomb in the crowd at near the finish line of the Boston Marathon. Three people were killed and more than 260 injured. Police killed one of the suspects in a shoot-out and, after more shooting, captured his brother in a boat in someone’s backyard.

Jury selection began yesterday in the trial of Dzhokhar Tsarnaev, and ABC, CBS and NBC on Monday evening and Tuesday morning were careful to explain that, because Tsarnaev is eligible for the death penalty, selection is likely to be long and painstaking.

What they didn’t tell viewers was almost anything about the Tsarnaev brothers’ possible motives. Were they Tea Party militants? Black separatists? Rabid Yankee fans? Anti-jogging radicals? The networks weren’t saying.

In fact, they were Chechnyan Muslims, allegedly fueled by radical Islam and disaffection with life in America. But the closest the networks came to mentioning that seemingly indispensible fact was on “World News Tonight with David Muir,” when ABC Chief Investigative Reporter Brian Ross speculated the defense would tell jurors the 21-year-old had been under the influence of his older brother. “But the jury will also see this bullet-pocked anti-American message,” Ross said over a picture of a letter, “that Tsarnaev allegedly scrawled on the side of the boat, saying ‘The government is killing our innocent civilians.’”

Actually, that was Mike Barnicle presuming to speak for the people of Boston on the Tsarnaev trial, but hey, what’s the difference?

Move along folks! Nothing to see here.