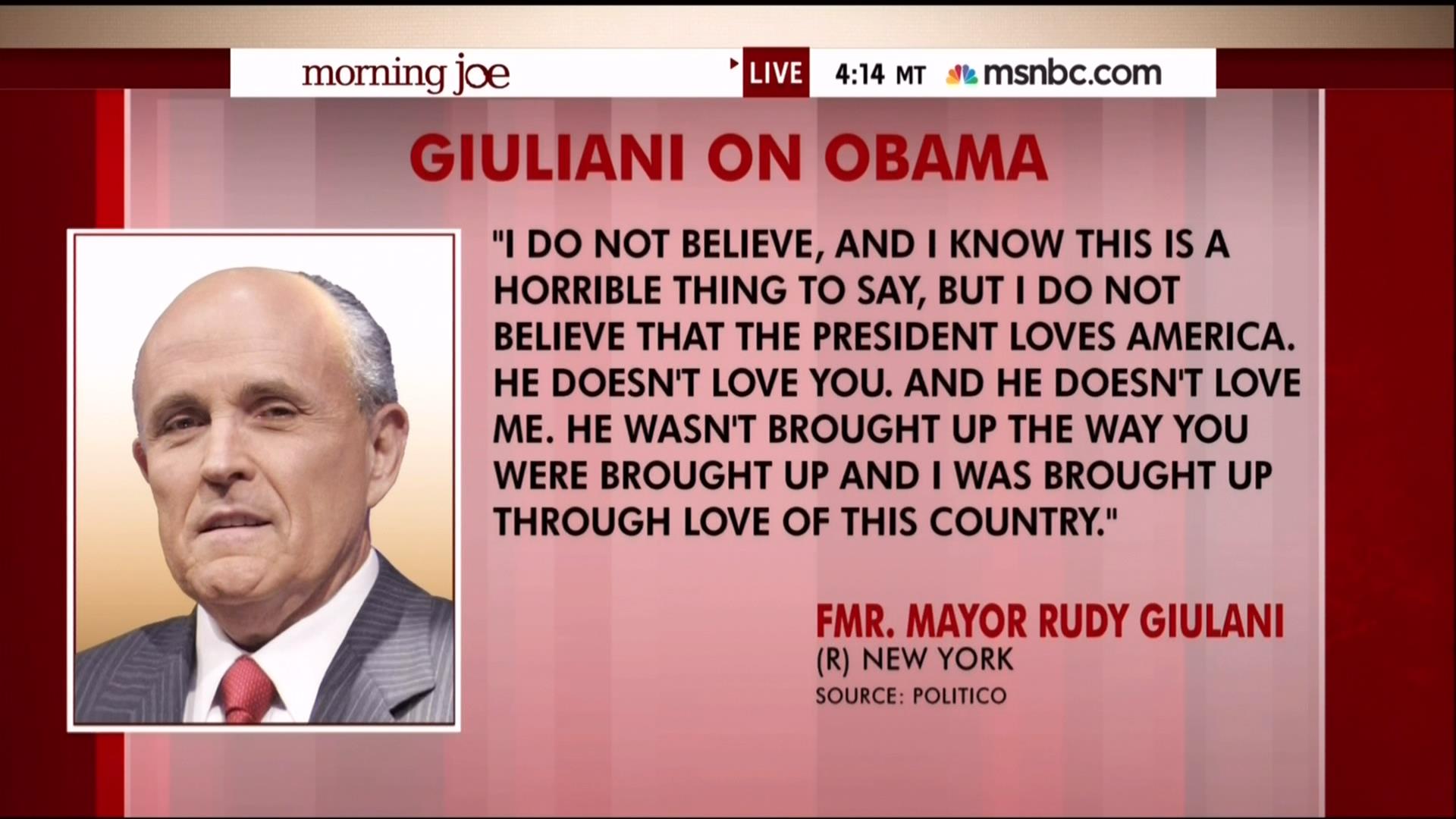 Something striking on today's Morning Joe. On the one hand, there was complete consensus that—as a matter of politics—Rudy Giuliani made a huge mistake in claiming that President Obama doesn't love America.  Panelists called his comments "stupid," "crazy," "tone deaf," even "racist."

Joe Scarborough did suggest that some Republican make this his Sister Souljah moment by criticizing Giuliani and saying that of course President Obama loves America. Mark Halperin suggested Rudy should see a psychiatrist, and maybe the rest of the GOP base:

MARK HALPERIN: You know, he said he's not a psychiatrist, some people said after that interview maybe he should seek help from one. Because this is just not helpful rhetoric. He said it at this event. What's interesting to me is Scott Walker didn't repudiate what he said. Bobby Jindal embraced what he said, to some extent. And the republican party really has almost got this obsession with talking about the president rather than at this time, even coming close to rallying around him. Mayor Giuliani is not going to run for president, but he is someone who has a pretty good feel for where his party is. And it's saying something that strikes a chord with a lot of Republicans in a way that’s not helpful to the country.

SCARBOROUGH: One of the reasons I was so critical of Mitt Romney is when people were going out and saying terrible things and calling the president a racist, saying he hated all white people and you could go down the list of things, that he was a Marxist, that he was a communist. I kept waiting for one Republican candidate to be smart enough to have that Sister Souljah moment. To be Bill Clinton and say, ‘listen, I disagree with the president economically, I think he has a disastrous economic policy, disastrous foreign policy but let's all agree on one thing, he loves this country. He's doing what he thinks is best for this country even though he's wrong. He's a good father. He's a good husband. He's a good man. He's just wrong for America.’ Are we really going to go through another cycle where Republican candidates are too stupid to get out of the way of the stupidest people in their party, that keep them from winning presidential elections by spewing hatred instead of telling people how they're going to get back to work?

SCARBOROUGH: So you think Jeb bush will be smart enough to say of course Barack Obama loves America.

SCARBOROUGH: ....We will see if Chris Christie repudiates. We will see if Jeb Bush repudiates. It's not enough to say we'll let Rudy Giuliani speak for himself. When you have somebody that's as major a figure in the party as Rudy Giuliani saying the president of the United States, the commander in chief, the man who is sworn to uphold the Constitution of the United States and protect its 320 million citizens hates -- does not love America?

They should be speaking out. We tried this four years ago and unfortunately nobody took the bait to do the smart thing and win moderate middle of the road swing voters, working-class Americans who disagree with Barack Obama economically and disagree with his foreign policy but don't like people questioning his patriotism or his love for America....

EUGENE ROBINSON: This is so crazy and counterproductive that it doesn't seem to me to be part of any sort of thought- out political strategy. You know, I mean, it's a guy losing it, basically. And will his party go along with this or will people start to stand up and say, wait a minute, let's not go over this cliff.

It broke out again during the 7 am hour:

MIKA BRZEZINSKI: First of all, these are stupid comments. I'm sort of not surprised, Gene, that Rudy Giuliani made them because he's appealed to a divisive sector of the base before. I've heard him do that. I'm surprised he didn't walk them back more quickly. He's an intelligent man, but the bigger picture I'd like Gene, then Mark, and then Donny, to cap things off here. The bigger picture is how other Republican presidential contenders react to this. What are we seeing and why are we surprised that we're not getting more? Gene?

EUGENE ROBINSON: I would like to hear more from the Republican contenders. We've heard from Bobby Jindal, who is not going to criticize Rudy Giuliani's remarks. This is crazy. This is a President who was elected twice with more than 50 percent of the popular vote both times. His approval rating are back up, just as politics, it seems crazy to me and just personally for Rudy Giuliani, yes, Mr. Mayor, it is racist and it sounds frankly kind of unhinged.

MARK HALPERIN: And Marco Rubio, Mika, is the only Republican we've been able to find who spoke out and said he believes the President loves America, but we haven't heard from Rand Paul or Jeb Bush or Governor Christie who I think, as Donny said earlier, probably the biggest opportunity to help define themselves in a positive way. It doesn't mean you have to attack Rudy Giuliani or repudiate what he's done positive in public life, but this kind of rhetoric, as Joe said before, so unhelpful to Republicans in winning back White House because while it's attempting to appeal to the segment of the population it's not going to get 270 electoral votes.

BRZEZINSKI: And Mark, Before Donny jumps in, I feel this is a slippery slope. This is an opportunity for all the presidential contenders who are going to have to go out there and somehow appeal to the base, but then make it to the big game. Kibosh this. Put this behind you so you don't have to fall into these sort of terrible areas of divisive talk. This is an easy one to put behind them but they've got to speak out.

HALPERIN: So it's tempting if you're a Republican now and you're trying to raise money or trying to rally a crowd or build support in Iowa or New Hampshire, it's so tempting to build your rhetoric around attack on President Obama because for the part of the country that doesn't like him, that's the easiest applause on you can get. Rudy Giuliani in that room in Manhattan with 60 prominent conservatives and some journalists, easiest thing you could say and Scott Walker as best we can tell, Scott Walker no, one else in the room objected to what mayor Giuliani said.

DONNY DEUTSCH: I want to say something on behalf of what I know, millions of New Yorkers think about Rudy Giuliani. Rudy Giuliani, this is not your 9/11. Okay? The country, the over 2,000 New Yorkers that lost their lives. I'm so tired of Rudy Giuliani co-oping the tragedy that was 9/11. You did your job as mayor, okay? And to suggest –

BRZEZINSKI: And he did a good one.

DEUTSCH: – He’s not a great America, does not love this country and I just – enough, Rudy. We don’t want to hear it from you. We all suffered. Mostly those families suffered, not you.

BARNICLE: Well, here's what jumps off in your ear when you hear it and we just heard it. When Rudy Giuliani says, President Obama didn't live through 9/11, I did. As if he were the only one who lived through September 11th.

DEUTSCH: Enough – and I'm speaking for New Yorkers. Enough. Shut up about it already.

BARNICLE: Well, what we have now is – and we're paying attention to a publicity-seeking, self-absorbed, ego maniac who is on the fringe of the politics of his own party. That's what we have.

HALPERIN: I agree – and not sure you're right about the last part though, he's not really at the fringe.

DEUTSCH: Speaking of non-fringe – I said this earlier. It's a chance for Jeb Bush to say whether he's a leader or not. We're in a lot of rumblings. This is a consensus guy, a different Republican, he's just right of center, and he is the right guy. You will define yourself in the next day or two. If you don't speak up against Giuliani, you're just more of the same.

HALPERIN: Look what happened four years ago, right? Rush Limbaugh criticizes a Georgetown lawsuit, calls her a slut. Mitt Romney’s asked about it, and the strongest thing he said was, those are not the words I would have used. Rush Limbaugh a few days later himself apologized for what he said.

HALPERIN: The party still hasn't gotten to a place where they can just say the truth about things that are over the line.

BARNICLE: But Rudy's comments have made first at 21 where a roll costs you like $150 and his extended comments yesterday are so low, they are so low that only – you would have to be living way out there on the fringe to even think they were worthy of listening to, never mind regarding the serious –

CNBC’s SARA EISEN: I would add that, as far as the political jabs go, there are so many ways that Republicans can go after Obama. I mean, look at the economy. For every positive thing that's happening –

EISEN: – in the economy right now, there's a negative they could point to. They could point to the fact that wages have not picked up. They can point to fact that many Americans, Mika, are not feeling this recovery, but to go after patriotism does feel a little unproductive and given what's going on with our economy.

BRZEZINSKI: And exploit 9/11 at the same time.

At the National Review, Kevin Williamson persuasively makes the  case that Rudy Is Right.  And back in 2007, this Newsbuster noted that alone among candidates and other politicians on an Iowa stage, during the playing of the National Anthem Obama didn't place his hand over his heart [video of the event here.]