Such an "independent," that Angus King.  Nancy Pelosi herself couldn't have performed a more partisan hack job of defending ObamaCare and attacking those who dare question it.

Things got ugly on today's Fox & Friends. The show ran the clip [that NB's P.J. Gladnick uncovered and that few in the MSM have aired] of ObamaCare architect Jonathan Gruber admitting that the bill's drafters had deliberately deceived the CBO as to the costs of the program, and relied on the "stupidity" of voters to push it through. King claimed he had never heard of Gruber, jabbed his finger while instructing the Fox & Friends hosts "don't lecture me," and accused them of being "cruel" for raising questions about ObamaCare. H/t NB reader Ray R.

BRIAN KILMEADE: Senator, you were not in the Senate when they voted on ObamaCare. And I wonder would you have voted on then and especially would you vote on now after you hear this. One of the architects, Jonathan Gruber, was caught on camera saying this at the University of Pennsylvania. And I put in brackets, the stupidity of the American voter. Let's listen.

KILMEADE: So he's basically saying that he didn't tell the truth when the law was passed; neither did Democrats when they put it forward. Your reaction to that? Are you as outraged as most of America?

ANGUS KING: Well, he shouldn't, I don't know what he was talking about. I certainly don't endorse those kind of comments. But I can recall that debate. I wasn't in office, but it was a very vigorous debate. Everybody knew that there were going to be additional taxes required to support the premiums under the Affordable Care Act. I don't see it as any deep dark conspiracy. There were all kinds of --

KING: Who was he? I don't know where he was in the process. There were hundreds of people --

KILMEADE: He wrote it!

KIMBERLY GUILFOYLE: He's the architect of ObamaCare. He's the one who put it together, one of them, and said in fact that they weren't transparent and forthcoming with the CBO because if they were, then the American people would know that in fact this was going to be something that was going to tax and penalize them and then they wouldn't go for it.

KILMEADE: What does that have to do with it?

GUILFOYLE: But that doesn't have anything to do with it.

KING: It does.  It has to do with having insurance, man.  If you don't have insurance, it's a high risk.

KILMEADE: They just lied about a health plan to the American people, called the stupidity of the American voter and bragged about the lack of transparency.

KING: Are you that cruel? That is what you're saying.

GUILFOYLE: No we're not.

GUILFOYLE: We're just looking out for the facts and information. 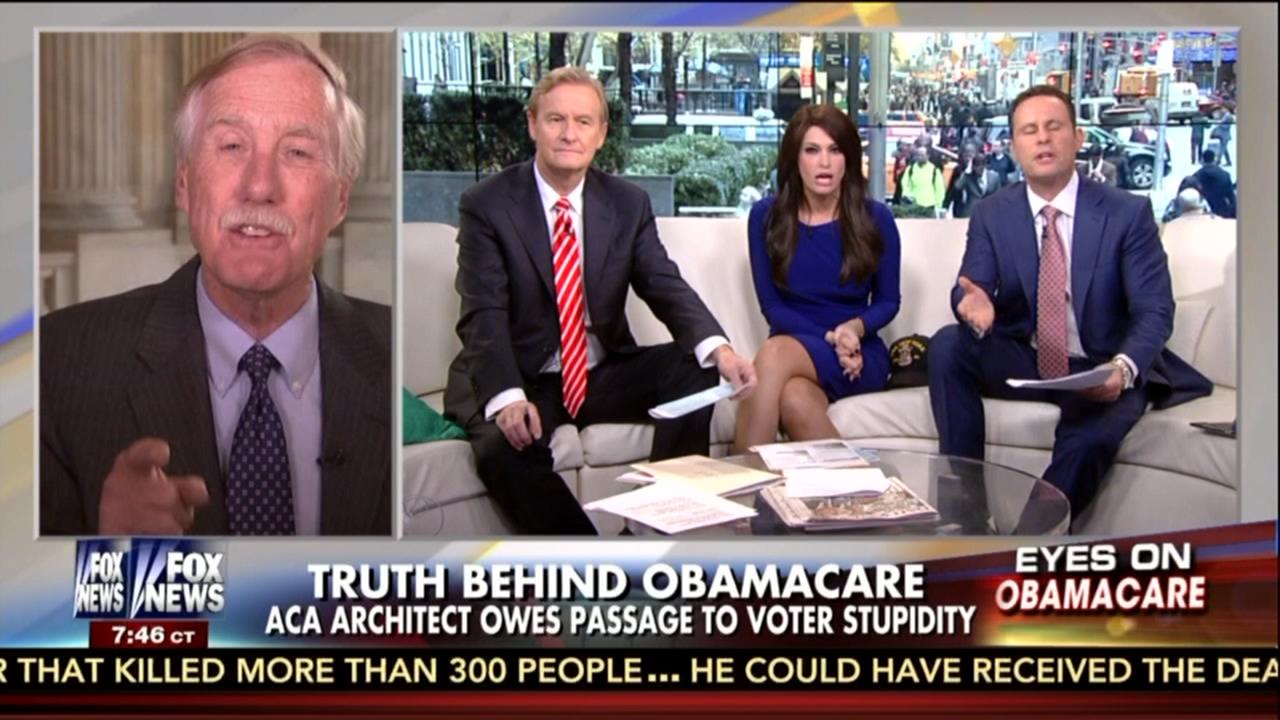