Reporting on a recently released survey by Rasmussen Reports that indicates that 62% of Americans oppose sanctuary city policies, Telemundo, the nation’s second largest Spanish-language network, slanted its coverage in favor of maintaining the controversial policy.

Reporting from the sanctuary city of Chicago, Telemundo correspondent Janet Rodríguez cited an unauthorized immigrant in favor of the policy, along with two quotes from Congressman Luis Gutiérrez (D-IL), who had the gall to minimize Kate Steinle’s murder, at the hands of a hardened criminal and five-time deportee, in the sanctuary city of San Francisco.

REP. LUIS GUTIERREZ: Every time a little thing like this happens, they use the most extreme example to say it must be eliminated.

Although Rodríguez reported the study’s findings that the majority of Americans not only oppose the policy, but also support withholding federal funding to make sanctuary cities comply with immigration authorities, she included only one critical view of the policy, that of presidential candidate Donald Trump calling sanctuary cities “a disgrace.”

To make matters worse, Rodríguez also misled viewers about the considerable trans-partisan nature of the opposition to sanctuary city policies. Rodríguez stated on air that “it has to be emphasized that the poll reveals that the majority of those who agree on eliminating sanctuary cities or that in some way they lose federal funds, all are Republicans.” 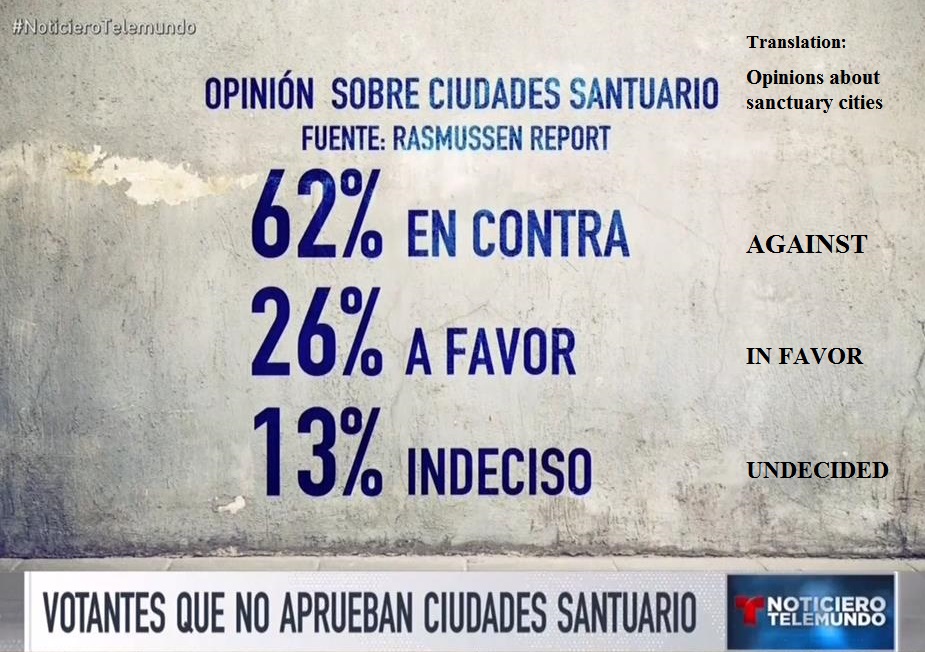 The relevant portions of the referenced national newscast appears below:

EDGARDO DEL VILLAR, ANCHOR: While Donald Trump insists in his anti-immigrant speech, a new poll is adding fuel to the fire. The majority of those polled say they disagree with sanctuary cities and are in favor of their elimination.

JANET RODRIGUEZ, CORRESPONDENT: … many of the immigrants, especially the undocumented, today told us they feel very tranquil being able to walk without pressure from authorities or immigration, and assure that eliminating sanctuary cities would be a big blow to the community. Here, immigrants walk without fear, without concern for his or her immigration status.

But the murder of a young woman in San Francisco, presumptively at the hands of an undocumented immigrant, has brought to the front pages the topic of sanctuary cities. A poll reveals that 62% of likely voters think the Department of Justice should take legal action against sanctuary cities, and 26% are against penalizing these cities. Donald Trump has joined the call, saying ‘I believe sanctuary cities are a disgrace. They are a disgrace and most people never heard about them until last week.’ Some 10 cities in the country currently give protection to undocumented immigrants, including New York, Los Angeles, Chicago and Houston.

REP. LUIS GUTIERREZ: Every time a little thing like this happens, they use the most extreme example to say it must be eliminated [emphasis added].

JANET RODRIGUEZ, CORRESPONDENT: In fact, respondents also demand legal action. More than half said they agree with eliminating federal funds that are granted to these cities.

And it has to be emphasized that the poll reveals that the majority of those who agree on eliminating sanctuary cities or that in some way they lose federal funds, all are Republicans, the poll says.