Presidential candidate Donald Trump is like the guy who takes out a Latin woman, showers her with compliments, and then calls her younger brother a pothead loser.

Trump actually made several positive statements about Mexico and Mexicans, but they have gone largely unheard in the media due to the force of the other, unpleasant remarks he also made.

“Druggies, drug dealers, rapists and killers are coming across the southern border,” Trump tweeted the other day. Even though the object of Trump’s attention knows it’s true, she apparently doesn’t want anyone else to point it out.

Trump’s campaign announcement speech actually applauded Mexico with “They’re laughing at us, at our stupidity. And now they are beating us economically.”  Everything was going well on the first date, until he took a personal shot at her family member. Trump later added “Mexico is killing the United States economically because their leaders and negotiators are FAR smarter than ours.”

In response, Univision in particular has fueled a well-known negative stereotype of a Mexican’s reaction to a personal insult.  Instead of “appreciating” that Mexico outperforms the U.S., all of the focus and attention are on the name-calling. Univision President Alberto Ciruana’s comparison of Trump to racist South Carolina mass murderer Dylann Roof is indicative of the irrationality of the reaction.

Univison’s Jorge Ramos quickly moved to replace Sheriff Joe Arpaio with The Donald as the Archvillain of all Hispanics and immigrants in the United States. Ramos evidently understands that Arpaio’s political days are numbered in Arizona, and that Mexican immigrants need a new boogeyman.  Trump and his “Livin’ la Vida Loca” hairstyle made it a no-brainer. 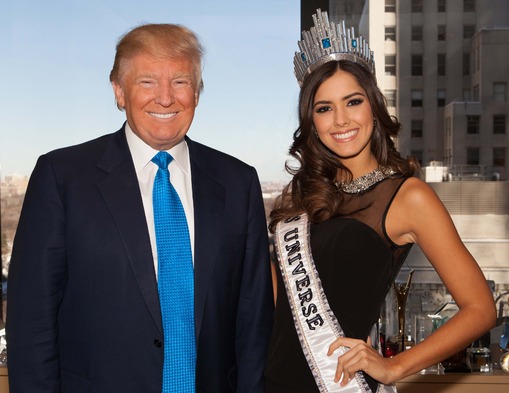 On top of that, the network’s rash announcement that it will back out of its Miss Universe contract with Trump, may very well turn out to be a winner for Trump.  This is akin to ESPN cancelling their NBA contract because of racist comments made by former Clippers owner Donald Sterling.

For now, we can only hope that cooler heads prevail as the debate moves forward.